When you see that the place you want to go is 160kms away you think a few hours on the bus. How about 8! Yeah apparently it takes 8 hours to drive 160kms through the mountains in Laos, we should have known haha. So by the time we arrived in Vang Vieng we had spent the last 21 hours on buses.

I don’t have to tell you what the bus rides are like here as I’ve already vented on many other occasions, but the woman behind us who vomited for 8 hours straight from an obviously extreme case of car sickness requires a mention. By the end of the trip it was more impressive than disgusting.

Needless to say when we finally arrived in Vang Vieng we ate, got a massage, and fell into a deep slumber. 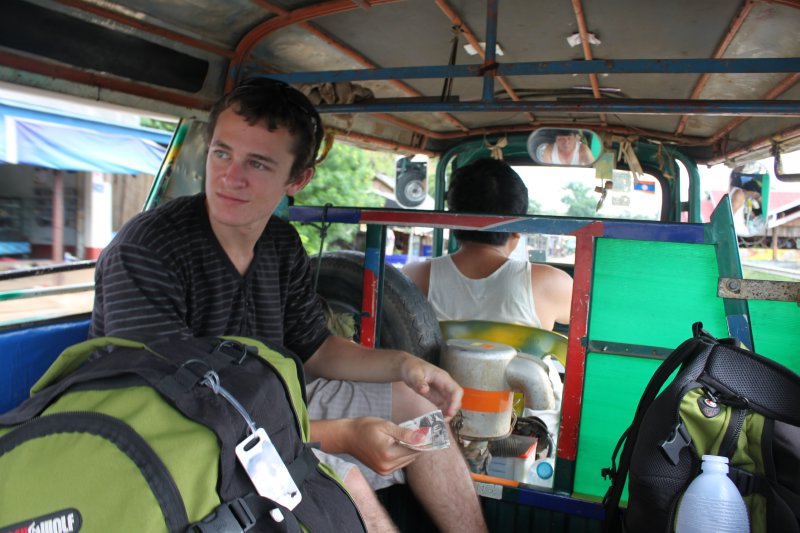 Vang Vieng is a small river town that has become the biggest party in Laos. There isn’t much to do here other than party, and meet other people who like to party. The main attraction is the river tubing. Basically it’s just a river lined with bars. You catch a tuk tuk 10km up the river and jump in with your tube. How do you get to the bars? You float down the river and if you want to stop at a particular bar you put your hand up and they will throw a rope out to you and pull you over to it. It’s a heap of fun, but when you mix a river with heaps of drunken 20 year olds you get a lot of deaths, in fact the week before we arrived someone drowned, so caution is definitely needed. That danger is amplified even more as all of the bars have huge rope swings and slides into the river. The only signage is a small sign with handwriting indicating rocks on one side and deep water on the other, so your aim has to be good or you can have a hard landing.
It is also a town with no rules and is unofficially one of South East Asia’s drug capitals, with marijuana, mushrooms, and opium orderable things from any of the café and bar menus. 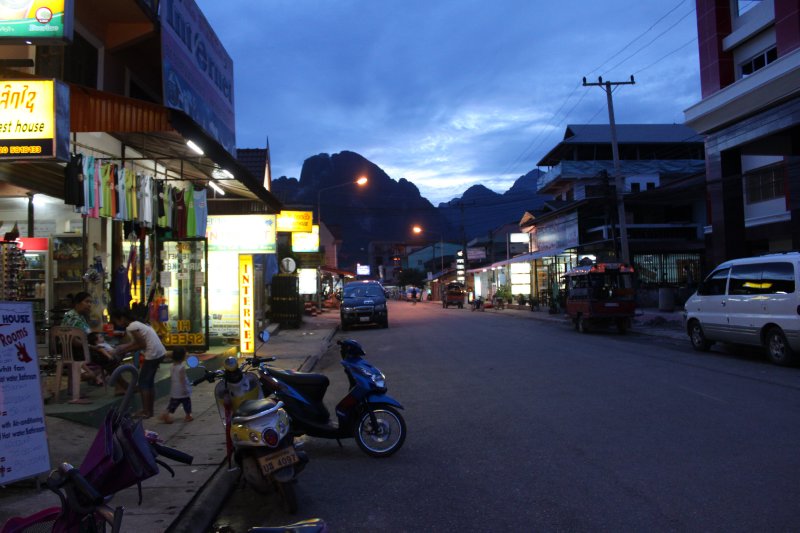 Once you get into the mood and past the fear of death it is super fun and the atmosphere is really great around the town, all the cafes in the town are constantly playing Family Guy or Friends. When we weren’t on the river we stuck to the Family Guy bars but surprisingly the Friends cafes were always busy, not sure why, it was a crap show in the 90’s and time certainly hasn’t made it any better. 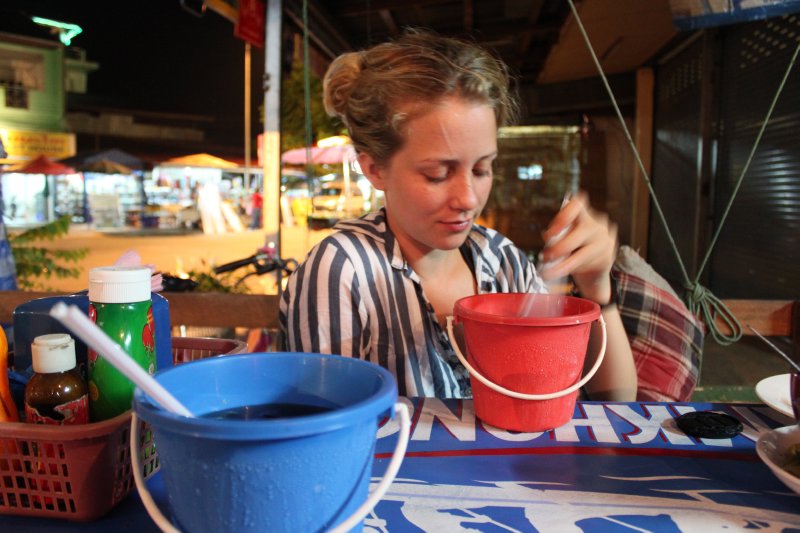 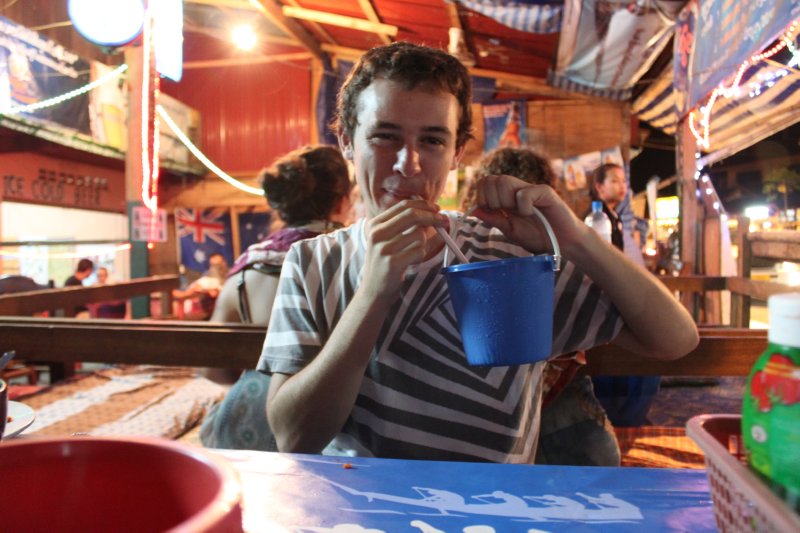 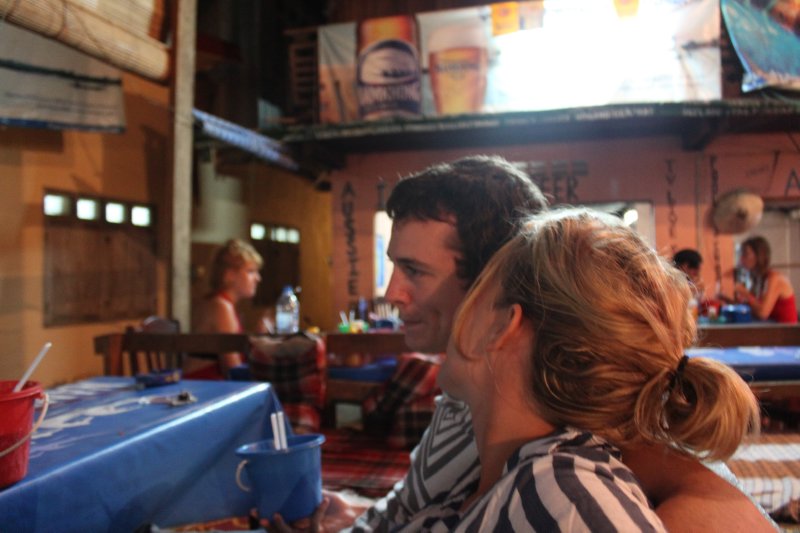 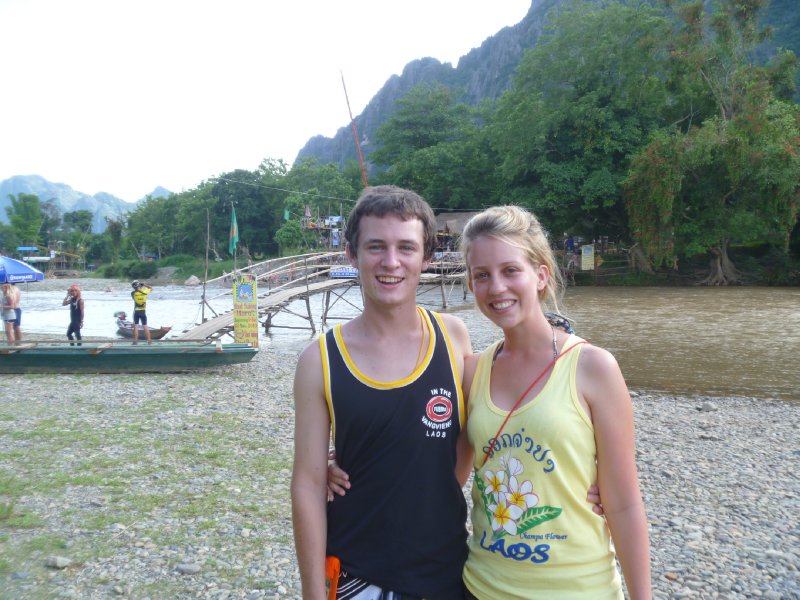 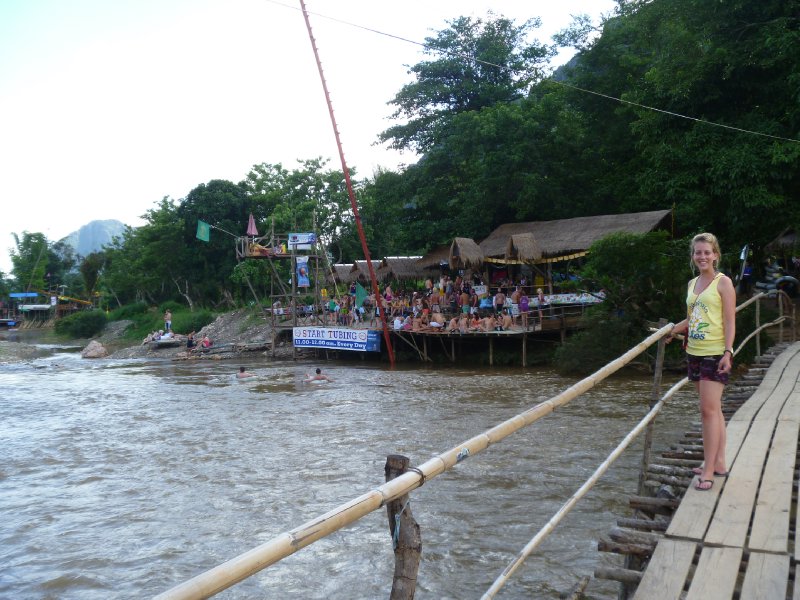 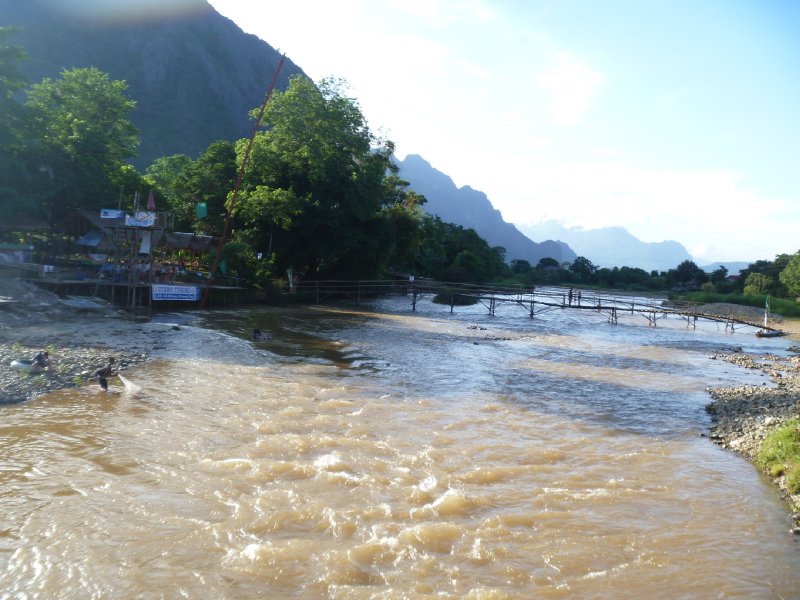 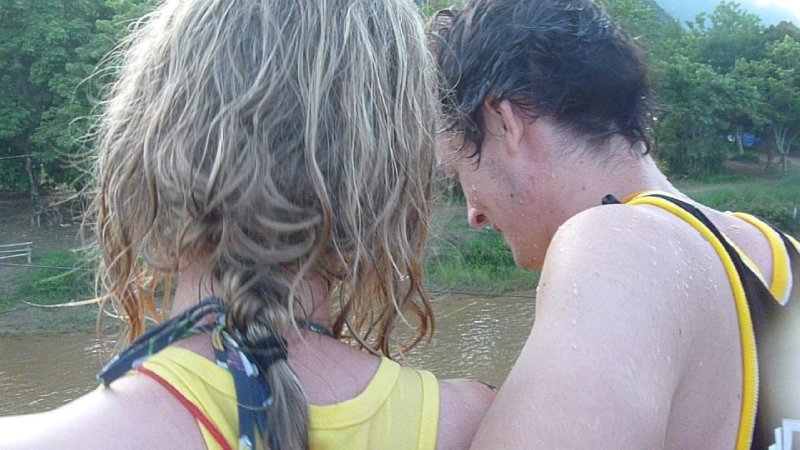 ^^ About to jump into the murky waters below 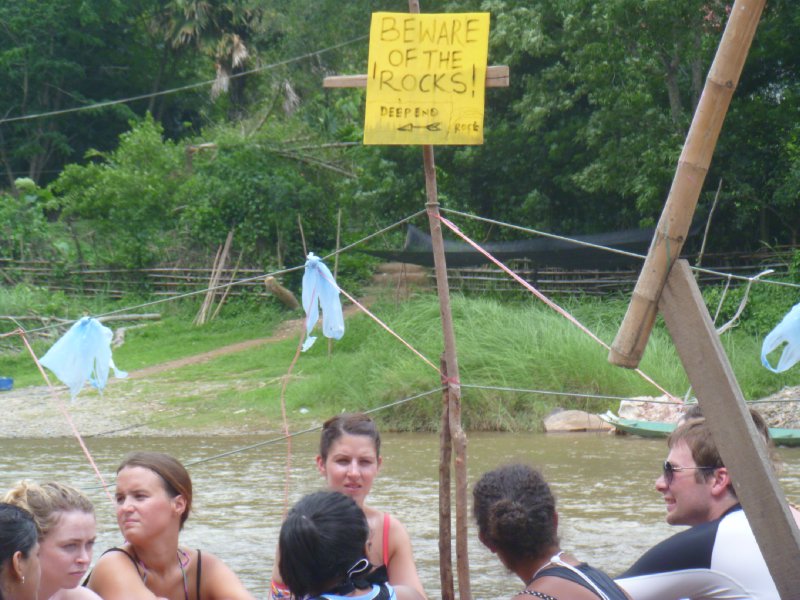 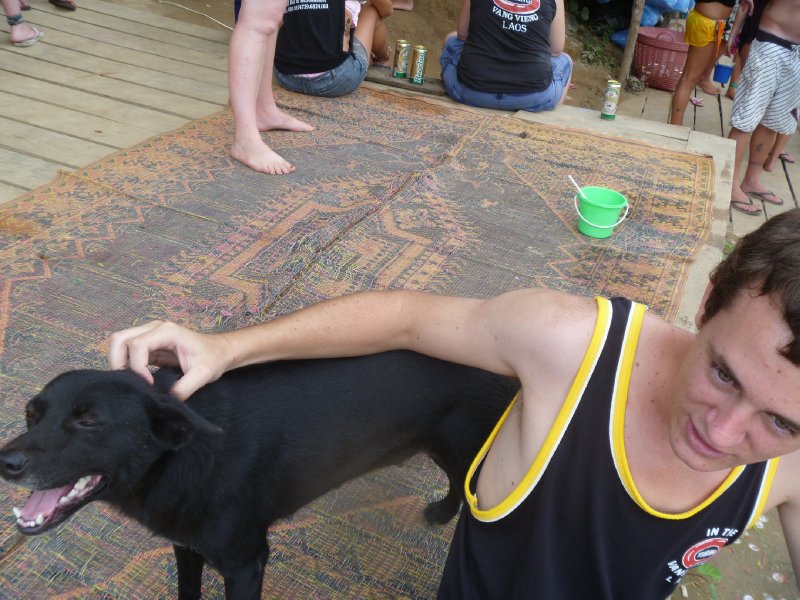 ^^ Resident river dog having a play 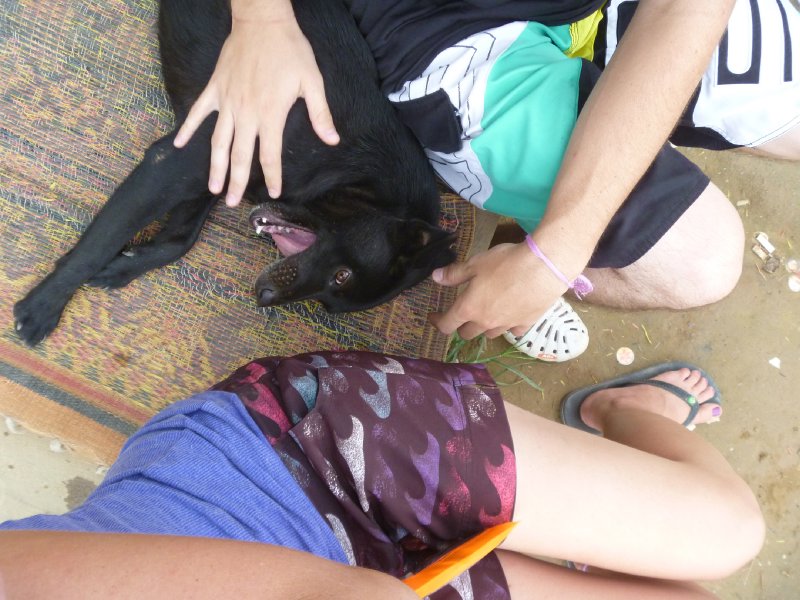 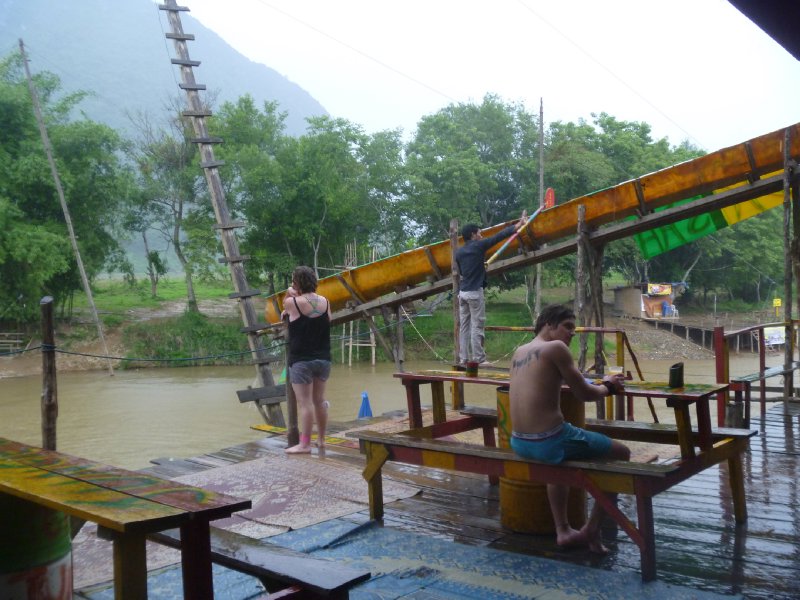 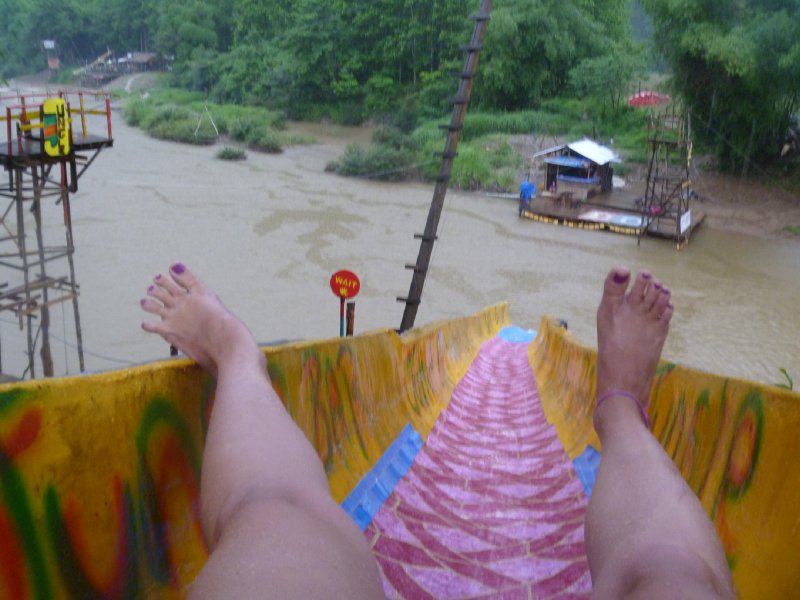 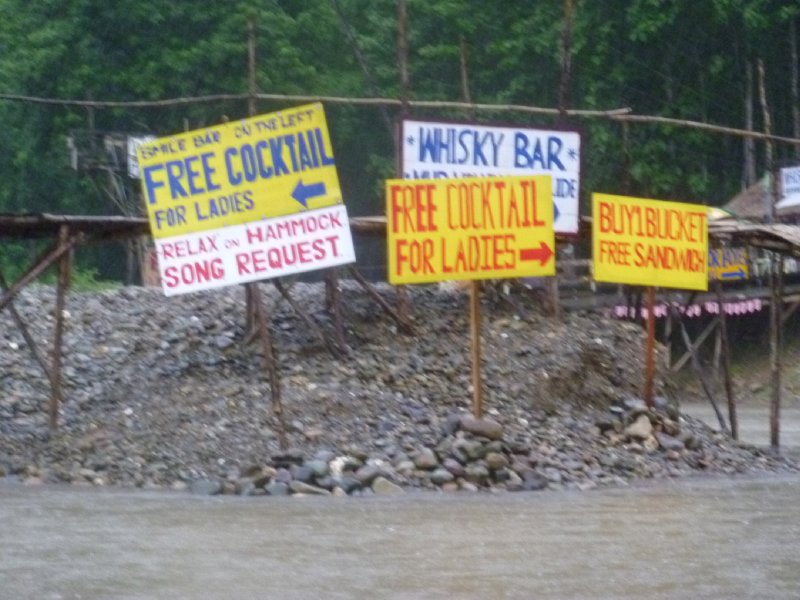 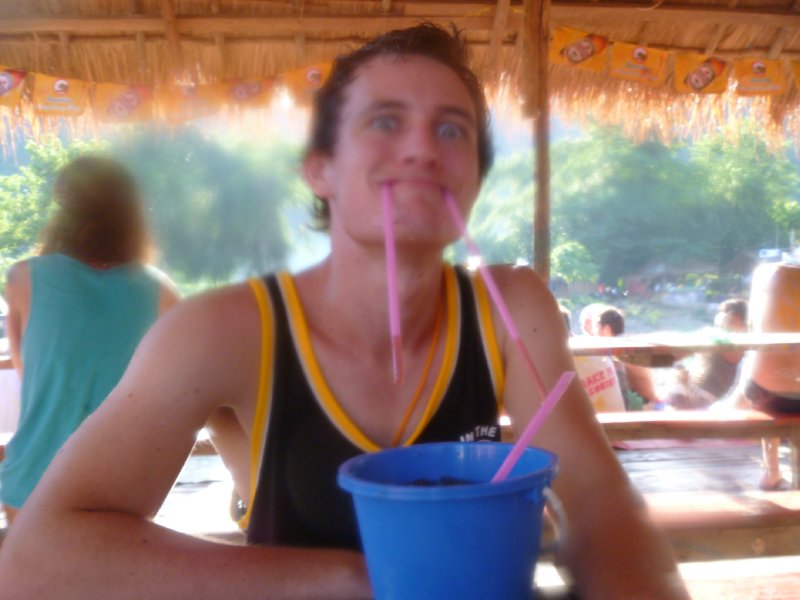 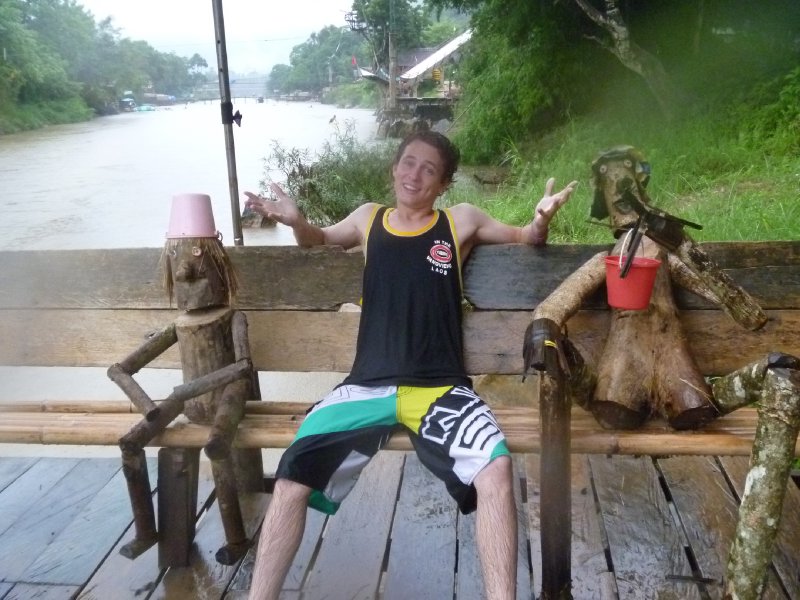 ^^ Chilling with my mates 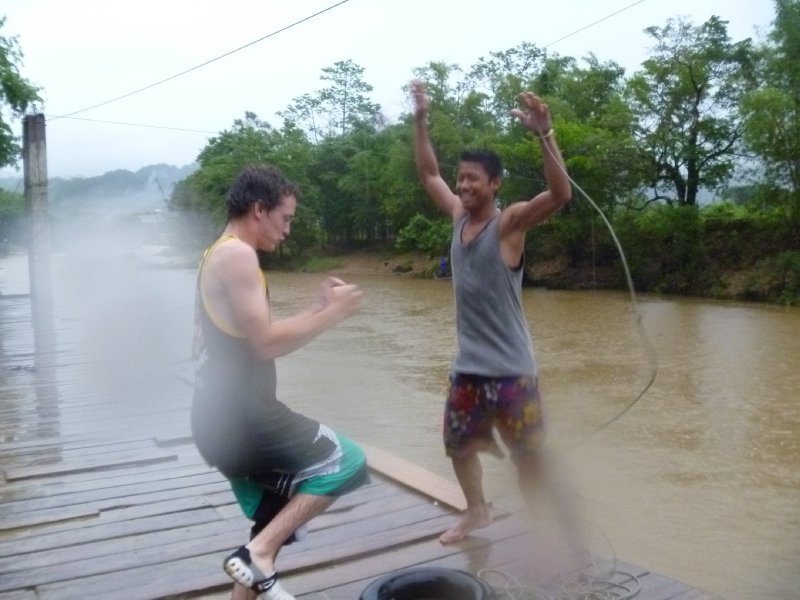 We were also lucky enough to be in town during a festival that celebrates the beginning of the wet season. How better to celebrate this occasion than with the launch of hundreds of homemade rockets! The rockets serve to frighten off evil spirits that may want to cause mischief during the rainy days. I must be an evil spirit because I was fairly frightened when all of these massive homemade rockets were being strapped to a bamboo frame to be launched into the nearby mountains. There were a few times during the day when smaller rockets went flying through the crowd – although I didn’t hear anyone scream, just saw lots of people ducking. 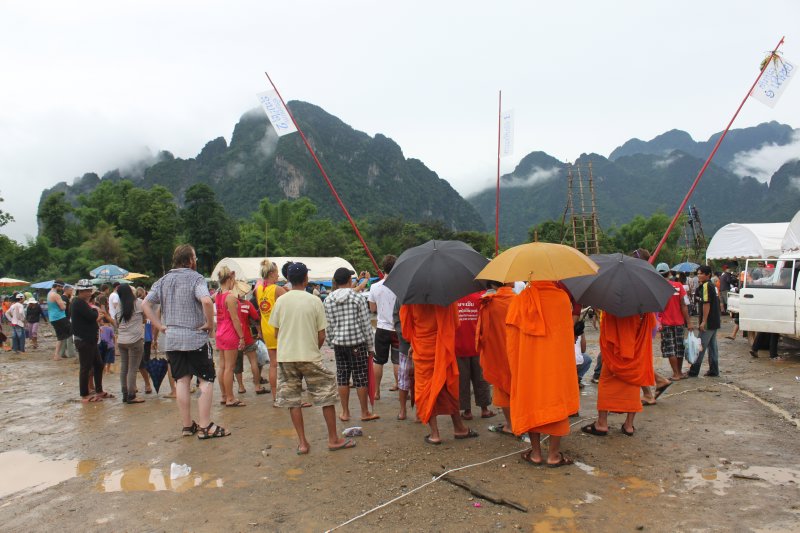 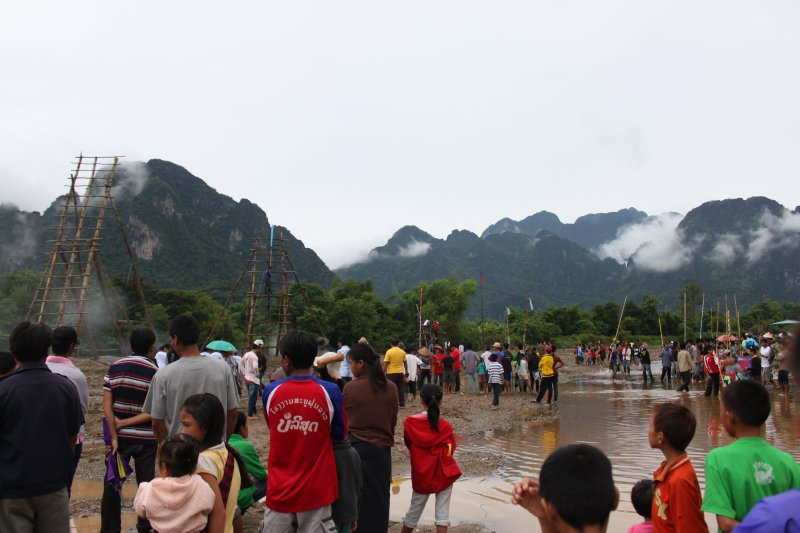 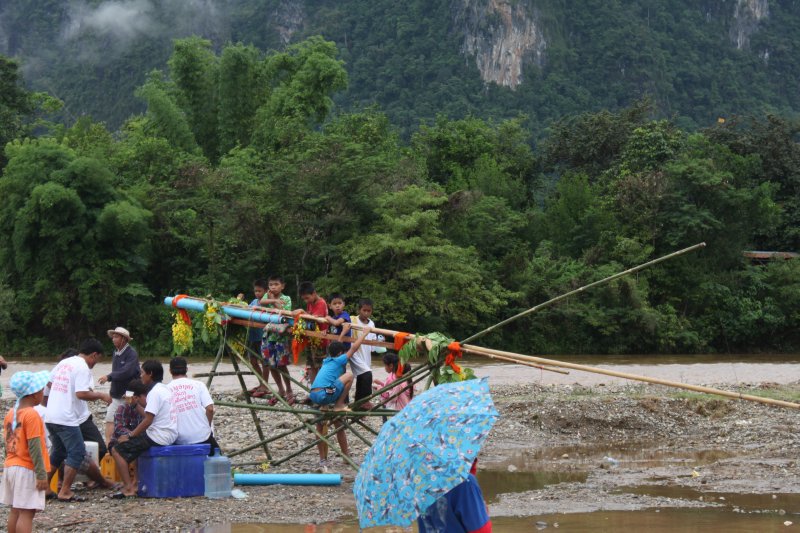 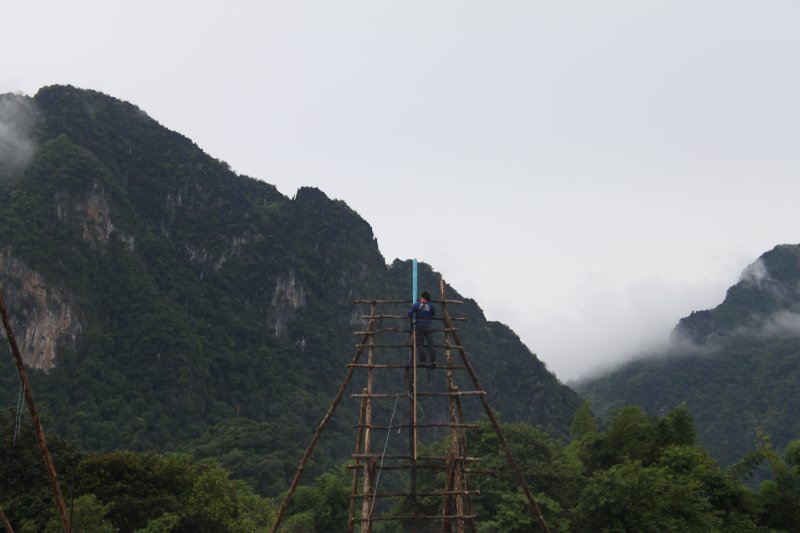 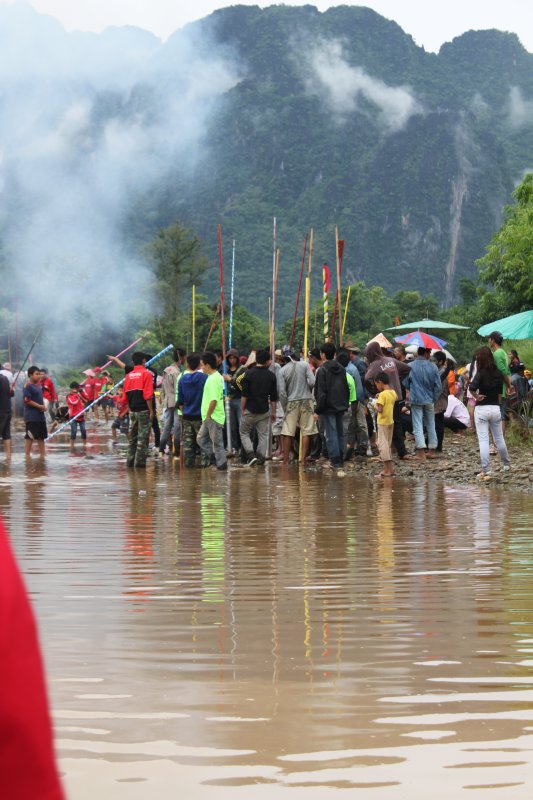 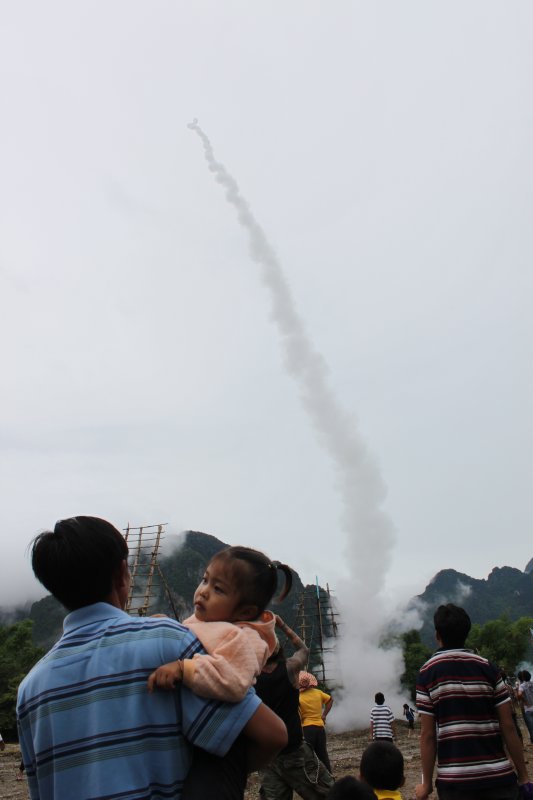 We spent a full week here on a bit of a bender and it was almost a relief to book our bus onto our next destination Vientiane, the capital of Laos.

Vang Vieng was great and we had a lot of fun in the week we were there but we could see it would be easy to lose yourself there and let things get out of control, especially when you see the travellers that have decided to stay there on the long term. The saying ‘too much blood in my alcohol system’ is a frightening reality when you see the few drug fucked tourists wasting away. I’m sure somewhere in the world their missing persons poster is hanging high.

We had a good experience here although it wouldn’t be everyone’s cup of tea.