The morning started with some Pho Bo (beef noodle soup) from a lady sitting on the footpath. It was different compared to all the other pho bo that we had tried, it had some sort of weird pink sausage in it and a big chunk of what we would call ‘grizzle’. We read somewhere later that day that fried tendons were a big hit in this area so I guess that’s what the chunk of super chewy discoloured meat was, we didn’t eat it though - partly because it looked horrendous and partly because it seemed impossible to bite and chew.

Shortly after breakfast TiTi arrived and introduced his friend Hiep, they are both in their 50’s and both members of the founding group that now call themselves Easy Riders. The easy riders are a group of amusing freelance motorbike guides that was formed after the war by some friends that decided they wanted to tour the Vietnam countryside, and make some money by taking tourists along with them. Many of them are well educated, in fact TiTi holds a Bachelor of Economics while Hiep has a Bachelor of Science majoring in biochemistry! They both speak fluent English, French, and various forms of highland dialect and because of their age they definitely offer an immense insight into the culture and history of Vietnam, especially the war.

Our first stop was the Linh Qua Ng Buddhist temple, a beautiful, big temple that had great statue-garden representing the life of Buddha. Kirby even made a small donation and lit some incense with the monk. 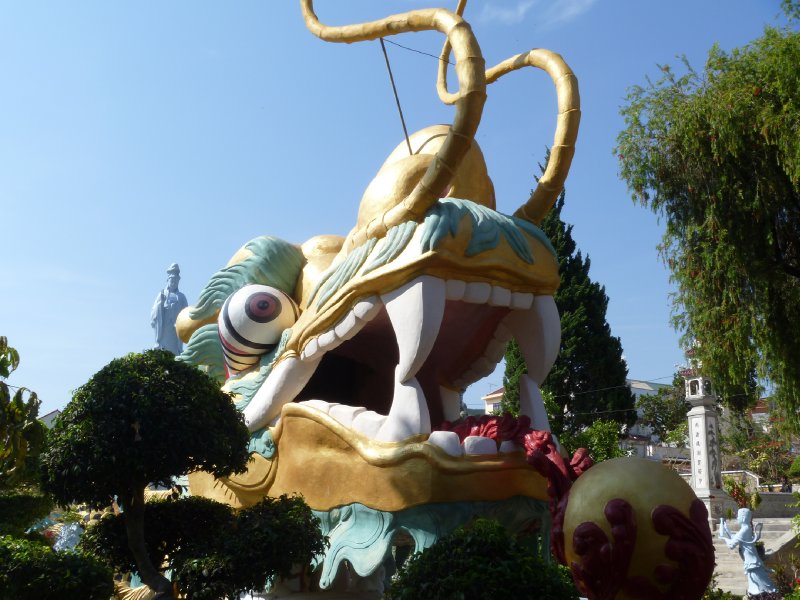 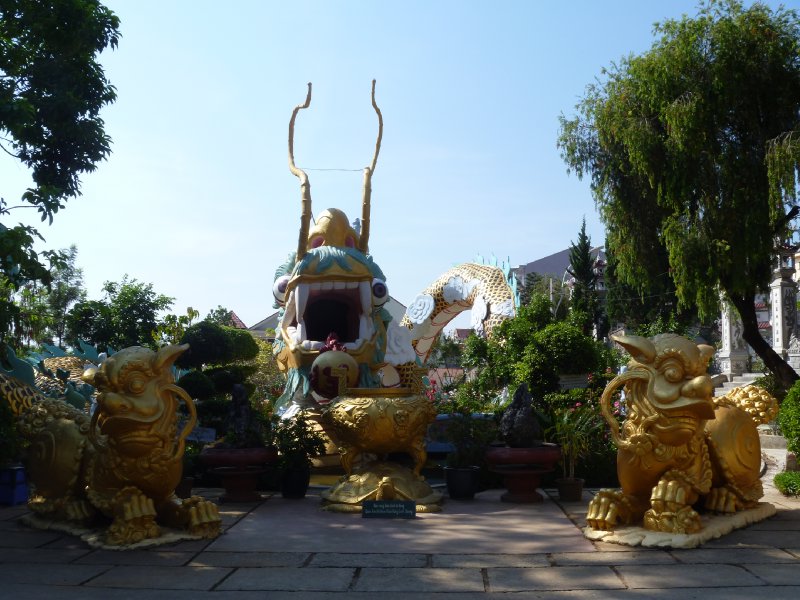 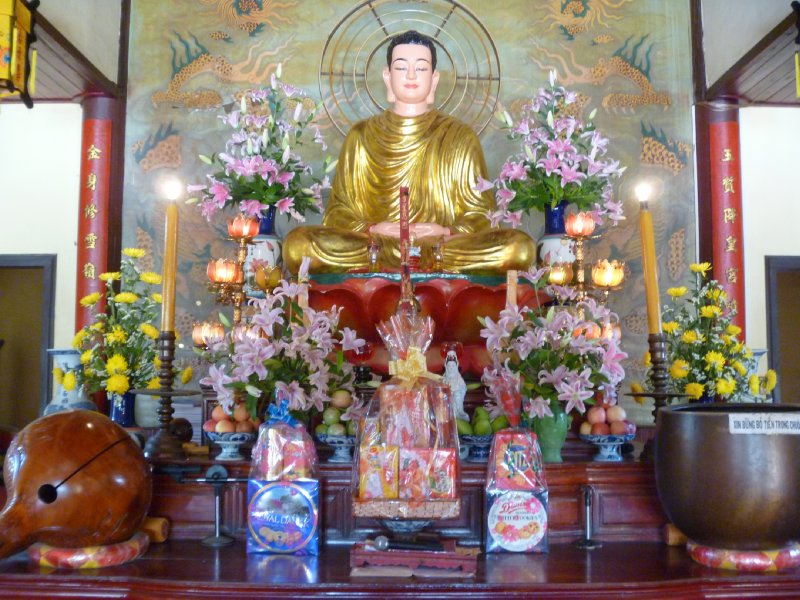 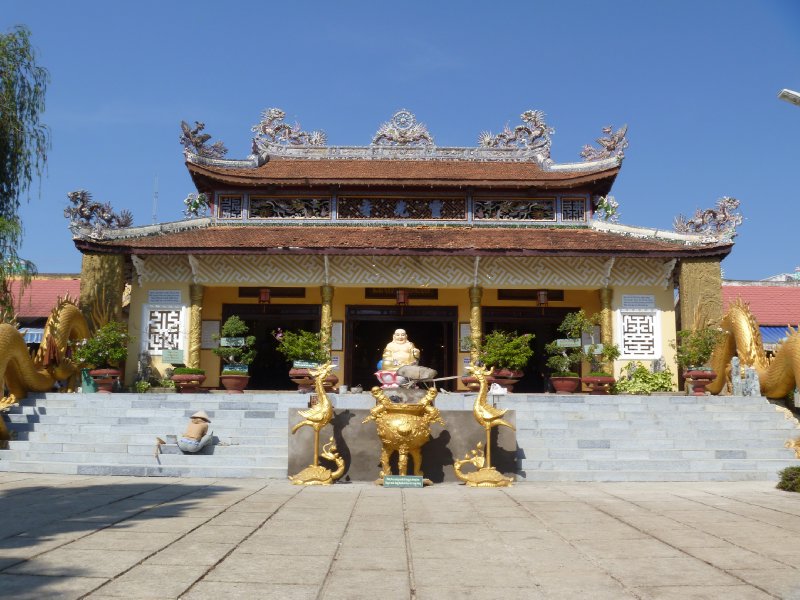 We wound through the orchard terraces along the hillside as we climbed even higher into the Dalat mountains. 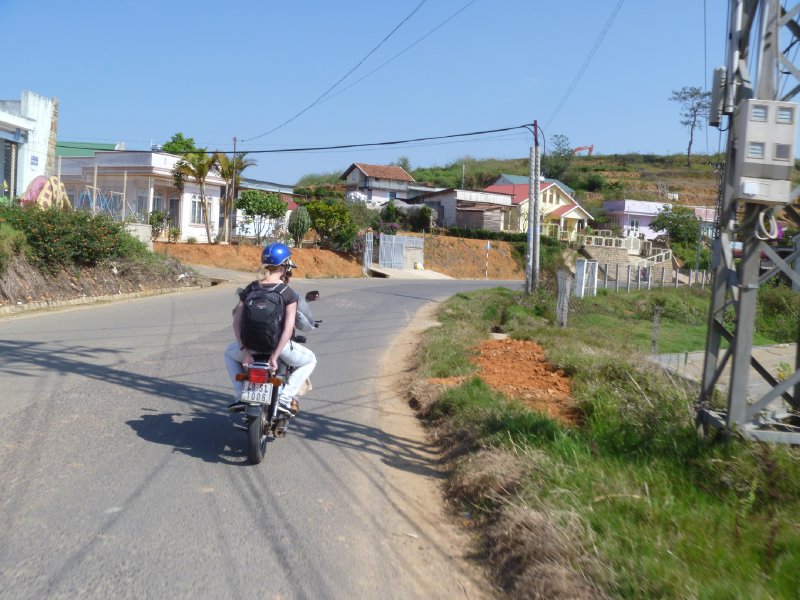 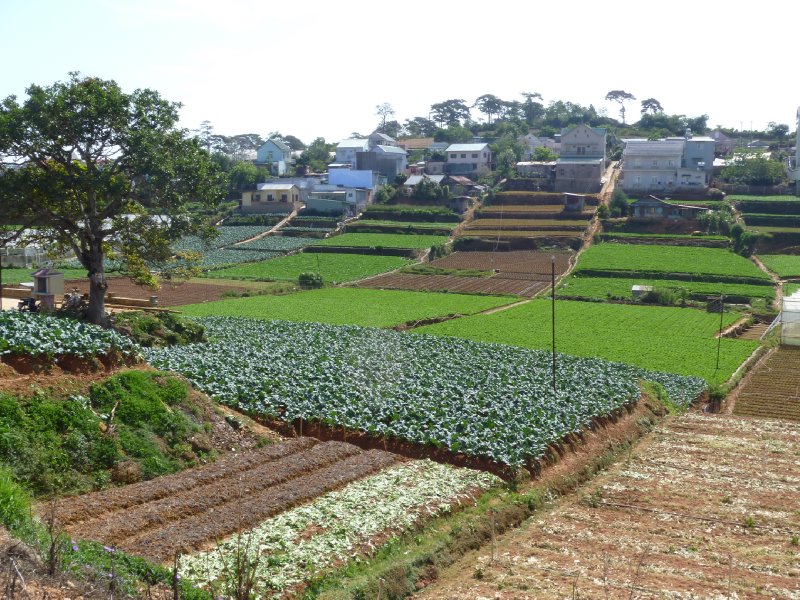 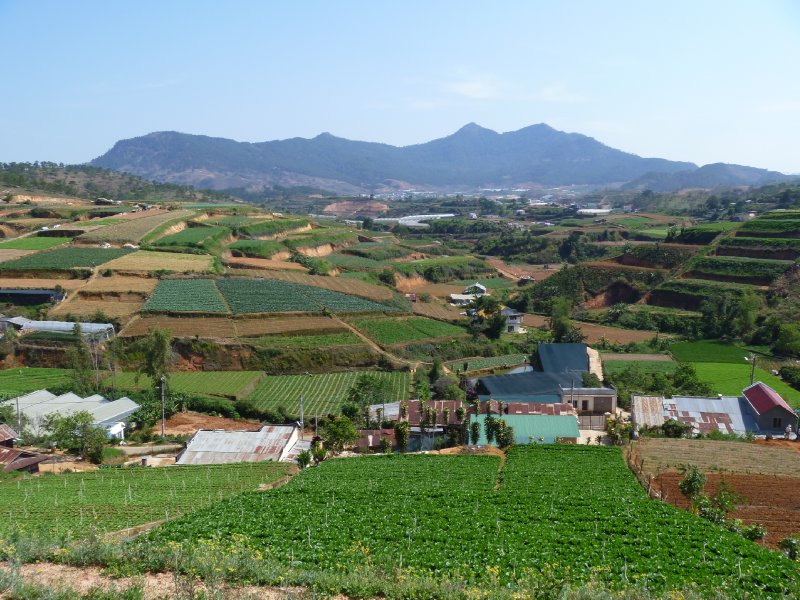 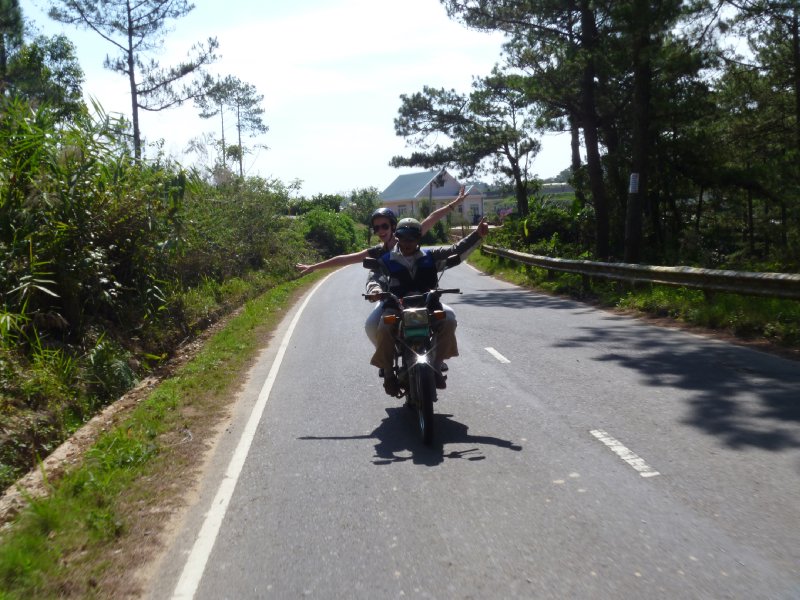 At one point we were dropped off at the base of a ‘small hill’ according to Hiep, and were told to walk over it and they will meet us on the other side. After a mild asthma and heart attack we made it to the top and collapsed as we absorbed the breathtaking view (threatening to take our last breath

). When we carefully descended down the other side, they cheekily greeted us with ‘How’s your legs? Hahaha’. 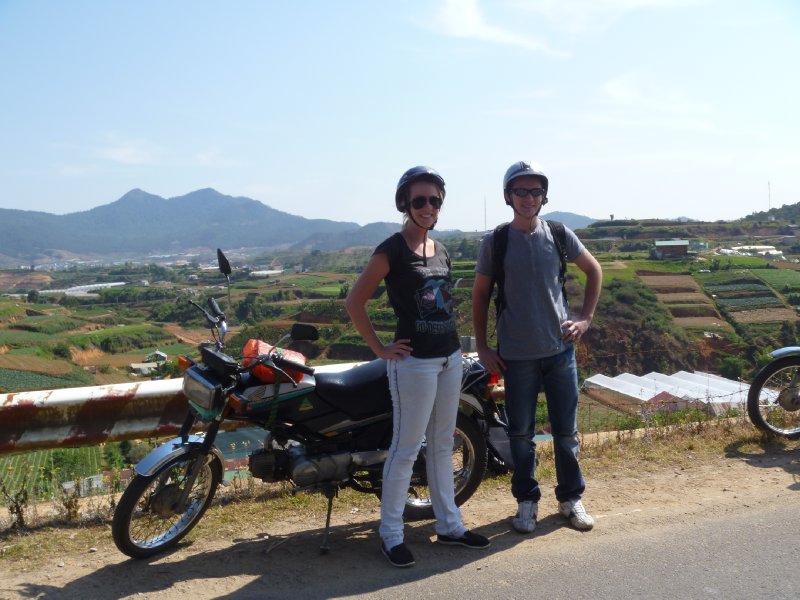 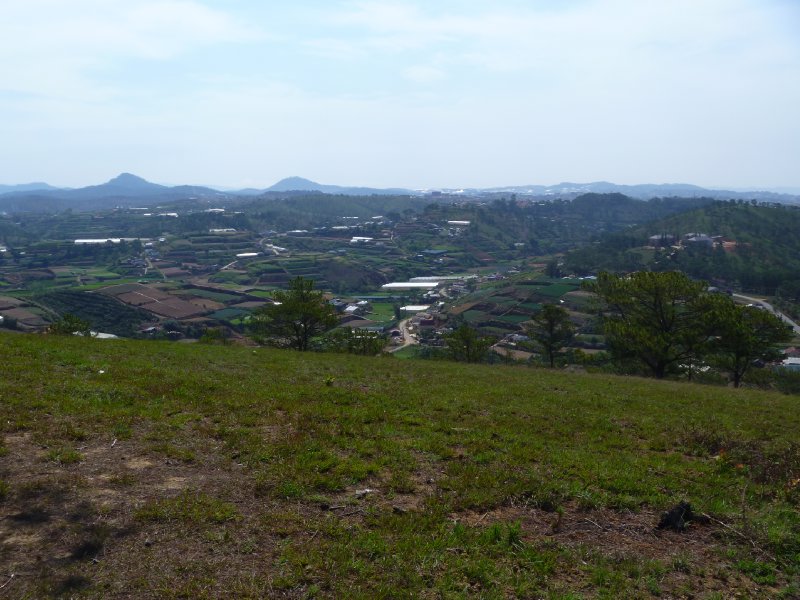 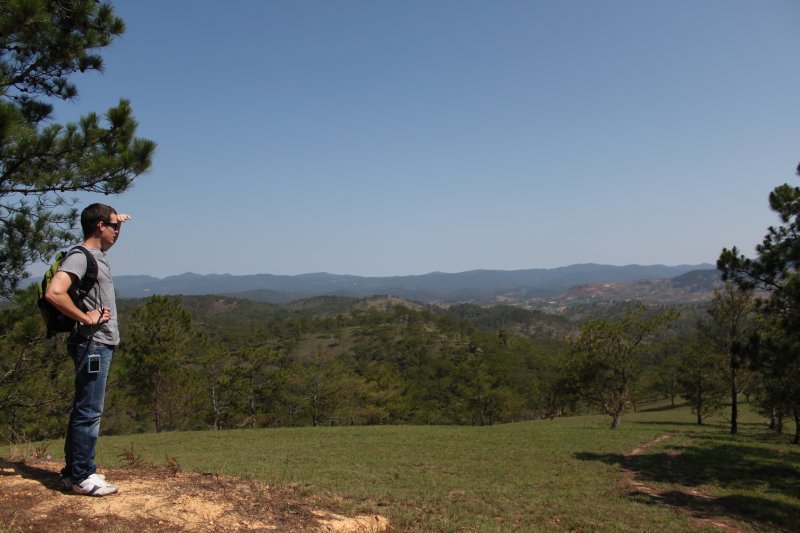 The coffee plantations in Dalat and the surrounding provinces have pumped a lot of money into the region and it is evident in the many French style houses that we passed. Each time we passed one Hiep and TiTi would both point and say ‘VIP French Villa’. At first we just nodded and looked, but after a few hours of every ‘French villa’ being pointed out we couldn’t help ourselves and started cheekily pointing out the French villas before they could. I think they enjoyed us joking around with them, they were definitely fuelled by their humour and TiTi had one of those laughs that was either booming or booming. Very amusing guides!

We did so much in one day; coffee plantations, orchards, flower farms, noodle making, bamboo weaving, fish farming, silk making, rice wine production… We even went to Elephant Waterfall and Linh An temple. 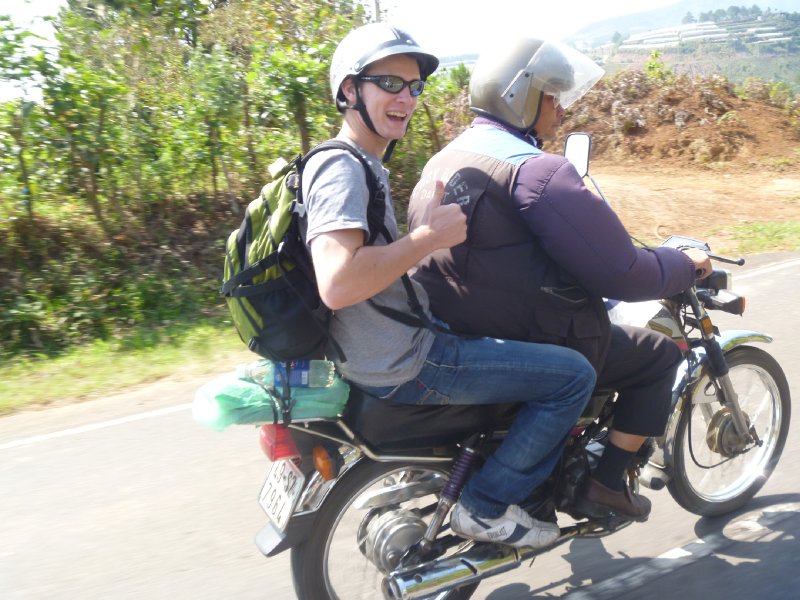 ^^ On the bike with Hiep 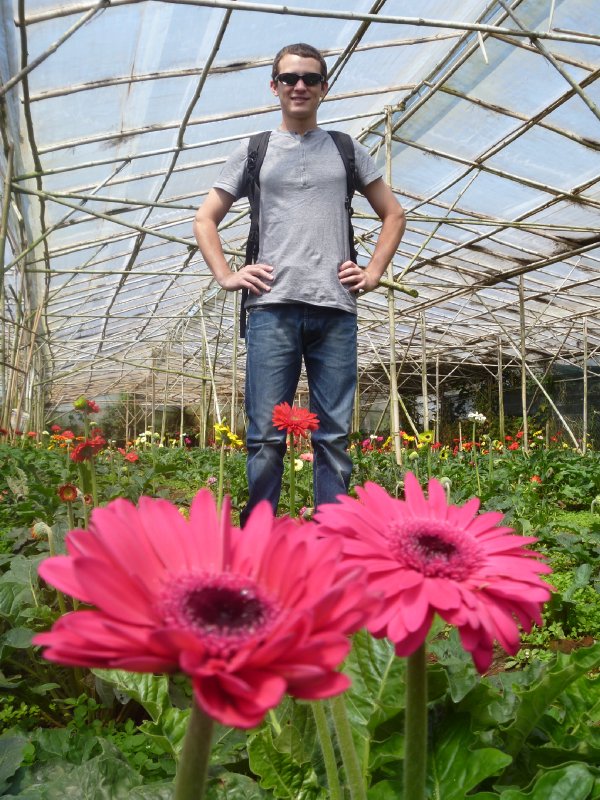 ^^ Stopped at a big flower farm 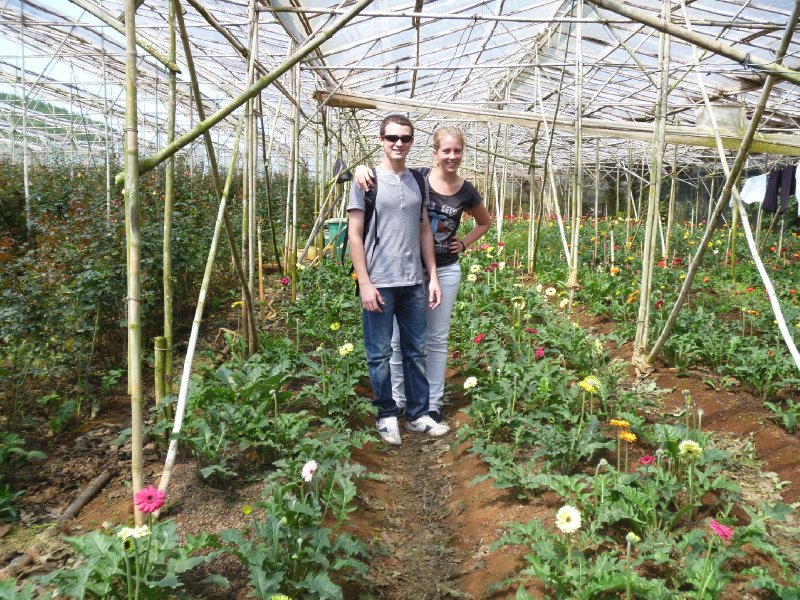 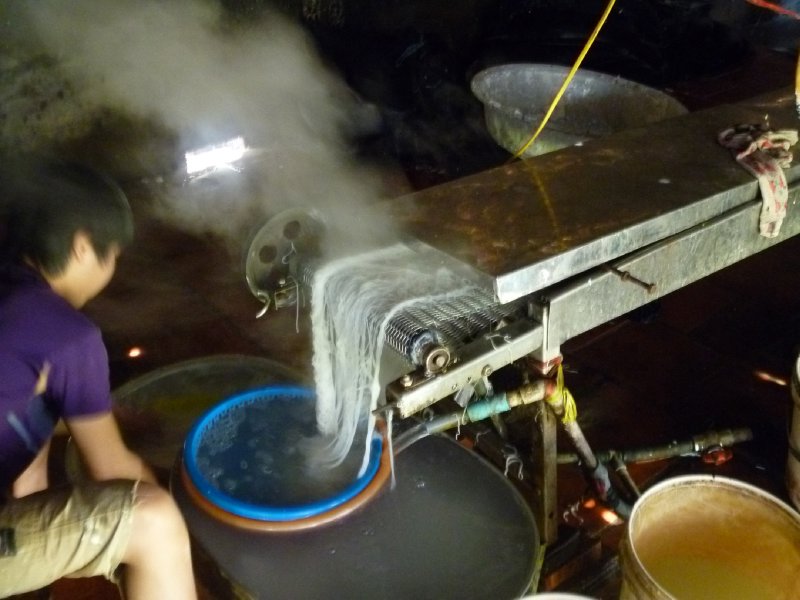 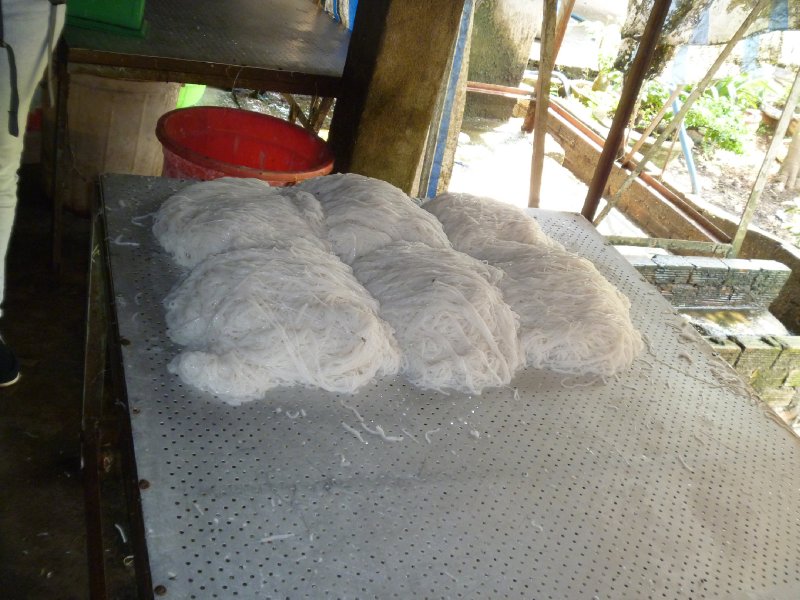 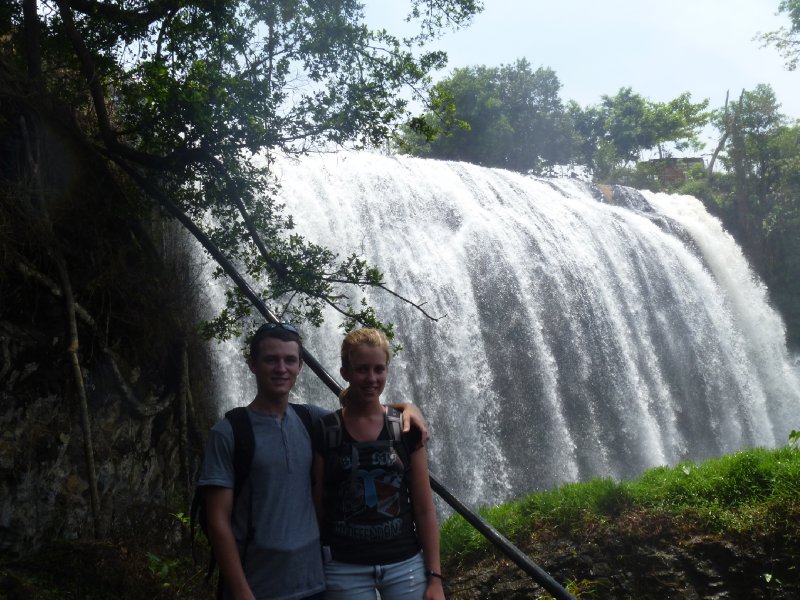 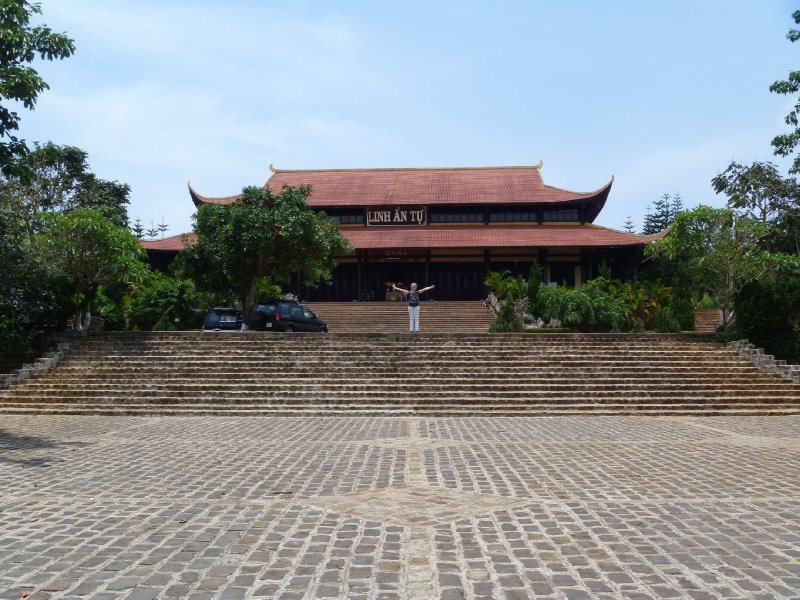 ^^ At Linh An Temple 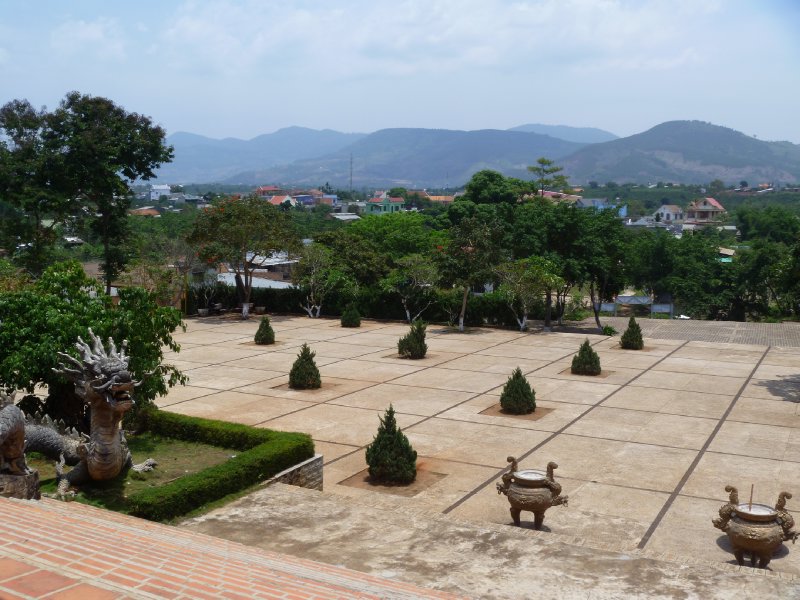 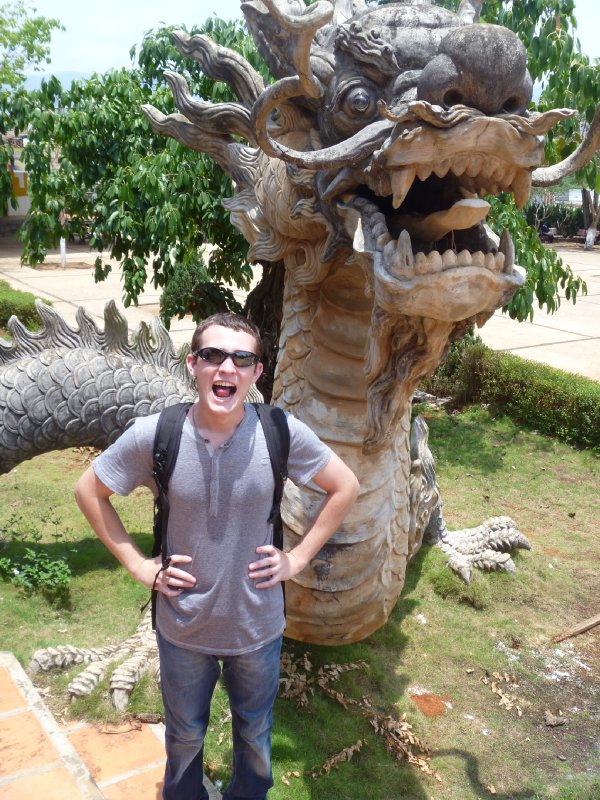 On the way back to Dalat we stopped on the side of the road, high up in the mountains, and Hiep and TiTi told us about the war and showed us the part of the forest that got napalm bombed, you can still see where the fire scorched the earth. 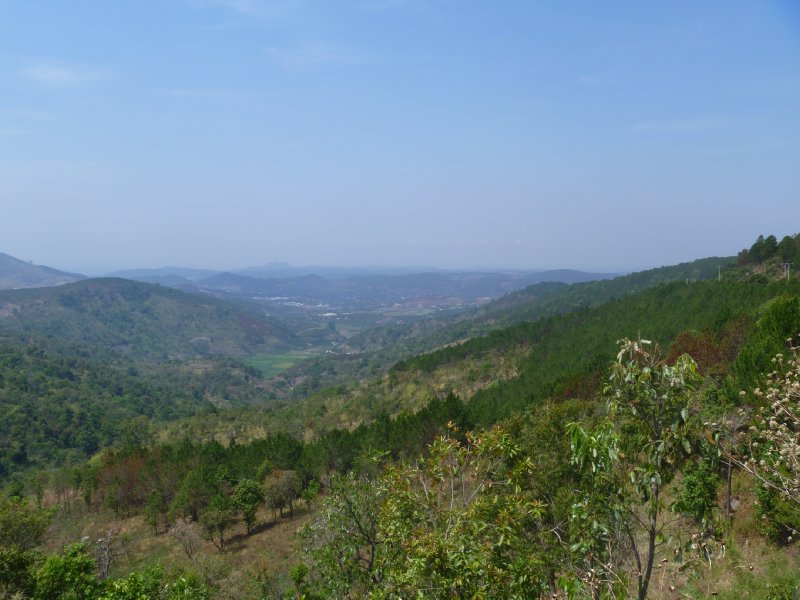 ^^ You can see where the forest is attempting to recover

Our last stop was the ‘Crazy House’, an artsy hotel that has all kinds of weird and wonderful statues and rooms. I felt like I had fell down the rabbit hole as I ascended up the legs of a giraffe to find myself looking into a room made like Poo Bears house. It is so hard to describe something that you can’t really imagine until you’ve been there, the photos don’t do it justice either. 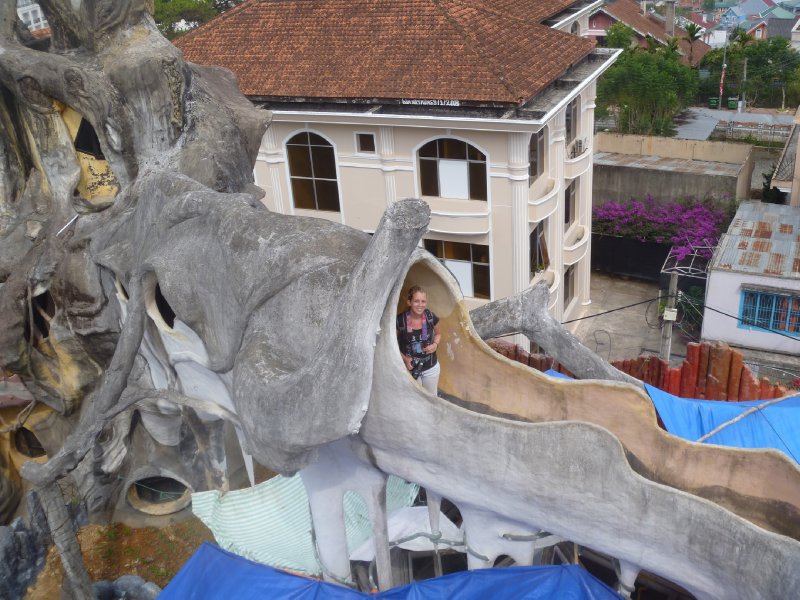 ^^ It's crazy hard to describe the crazy house hotel 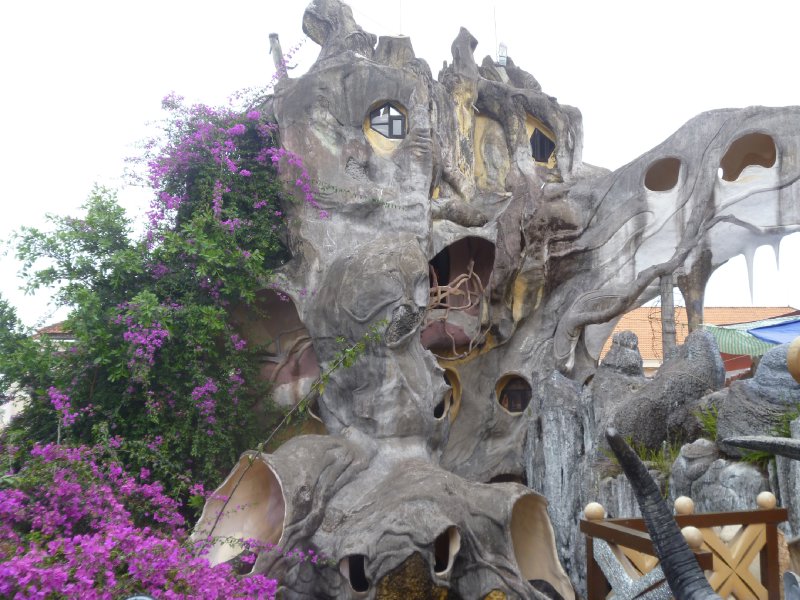 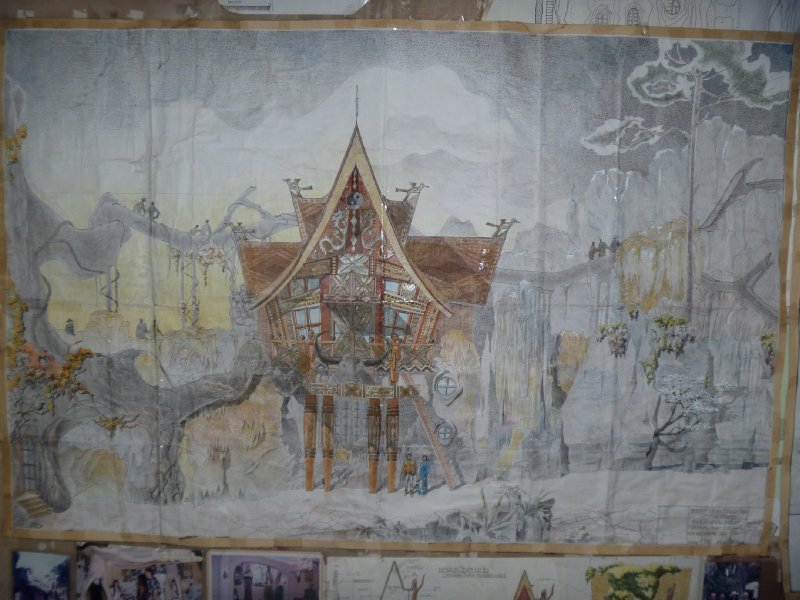 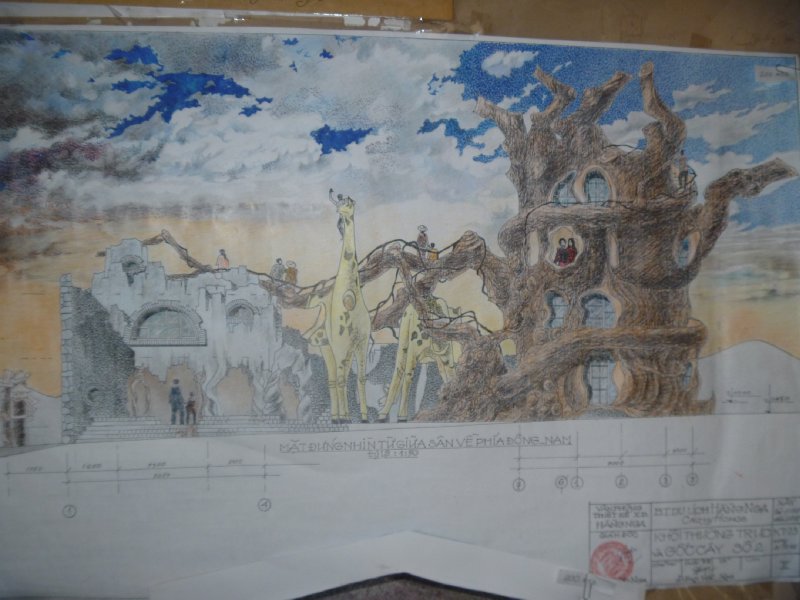 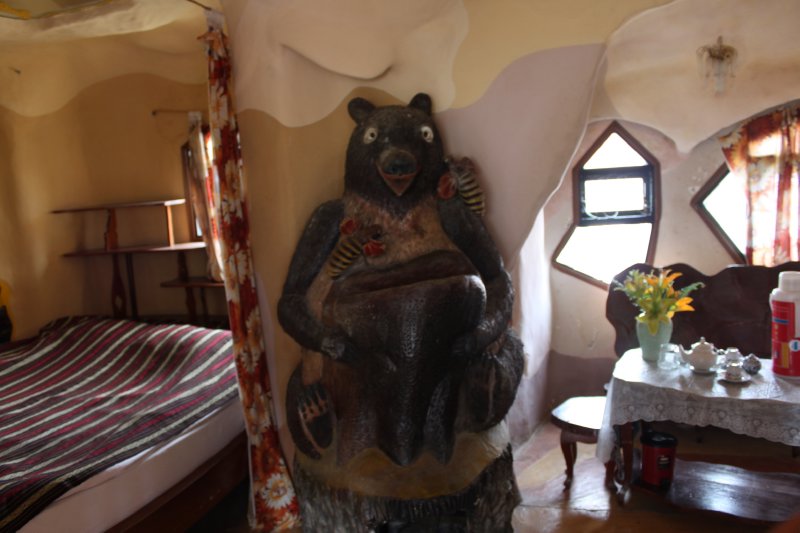 After that we sat down and had lunch with the guys. They proposed we go with them on a three day trip through the central highlands to Nah Trang, and although it was beyond our budget, we tore up our pre-purchased bus ticket and set our sights towards a more raw experience. The next three days are going to be awesome!!!