We were dropped off just outside of Khao San road – the main tourist district. Literally 5 minutes of being in Bangkok I was approached and offered ‘sucky sucky’… twice. This is even while wearing my full back pack and discussing with Kirby where to find a good cheap hotel – Bangkok certainly doesn’t disappoint! We struggled to find any reasonable hotels/guesthouses/hostels that were less than $20 per night. We had to settle for a windowless (though nicely furnished with an ensuite, it also had air-con but that was necessary as much for cooling as it was for accessing oxygen – refer to ‘windowless’) concrete box for 450 baht ($14) per night. 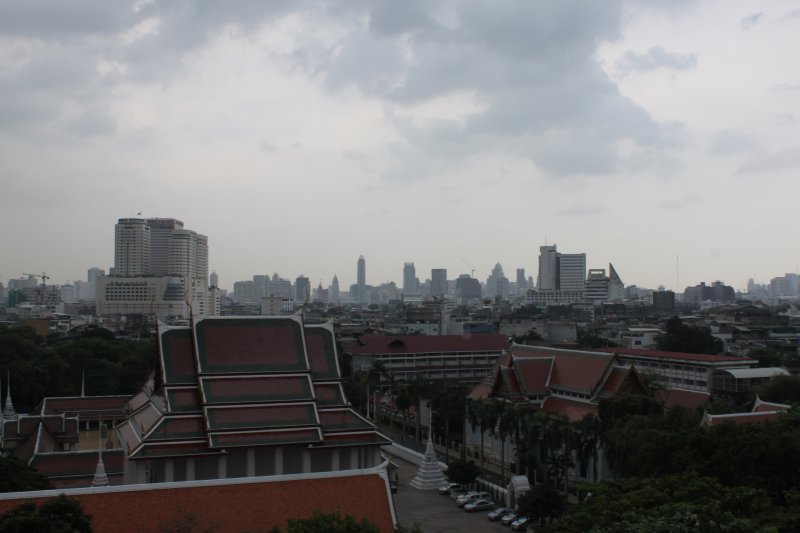 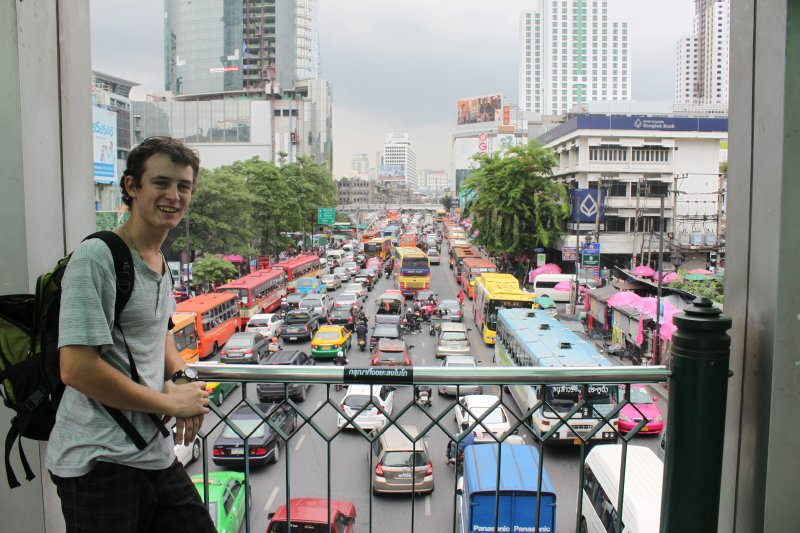 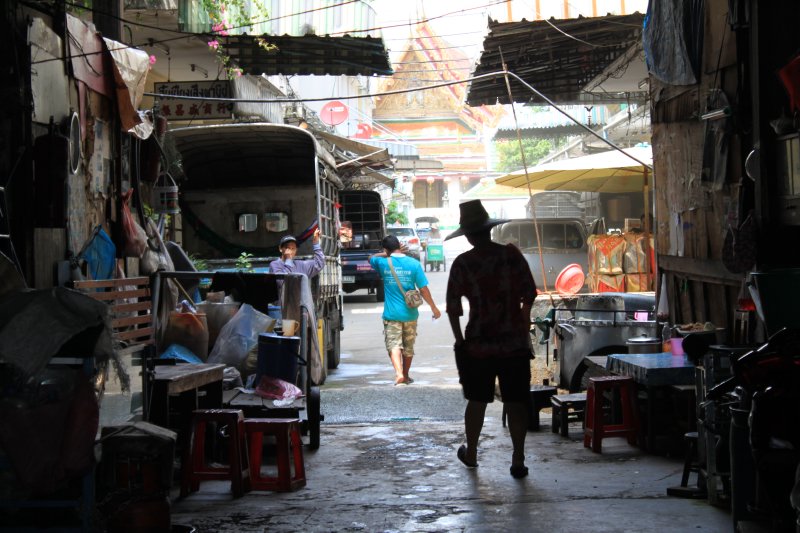 We were pretty tired by the time we arrived, found a hotel, and ate so we just checked out Khao San road quickly. It’s definitely the place to be if you want fake I.D’s, fake university degrees, dodgy tattoos, dirty prostitutes, drugs, or corrupt tuk-tuk drivers; A real culmination of all the uncivilized things that years of gross backpackers bring to a district, and we can’t wait to share it with Ellie and Steven in 2 days

We missed our first morning in Bangkok because our pitch-black, windowless, air conditioned hotel room fooled us into thinking it was still night time when in fact the clock was proudly in the PM.
After brunch..? we made our way to the tourist information centre to see if we could pick up a bus timetable. Apparently there is no bus timetable, and you are just meant to know where the bus is going according to the number and colour of the line painted on the side of it – so no buses for us. Luckily the taxis are cheap (around $3 to anywhere in the main part of the city), the trick is to make sure they turn the meter on; otherwise they will demand some extortionate amount when you arrive at your destination. Upon stepping outside of the tourist information centre we were greeted with a freckled, 70 something, homeless bum…literally. An old homeless man was completely naked doing a shit, into a green bucket…thank you Bangkok, thank you.

On the 27th we headed across town to the Indian Embassy to apply for our Indian Visa’s, this was also the day that Steven and Ellie were arriving so we were very excited to soon have someone else to talk to, haha

. The crap part of the day was that when we arrived at the Indian Embassy we found out that we were supposed to fill out the visa forms online, print them, and then bring them to be processed! Pain in the arse. Feeling beaten we decided to not waste our trip all the way across town and instead checked out a couple of the massive shopping centres. We ended up in Centrepoint Shopping Centre (which I think we also have in Aus?) and watched the new X-Men movie (a real version, not pirated- who’d have thought in Thailand, right?). 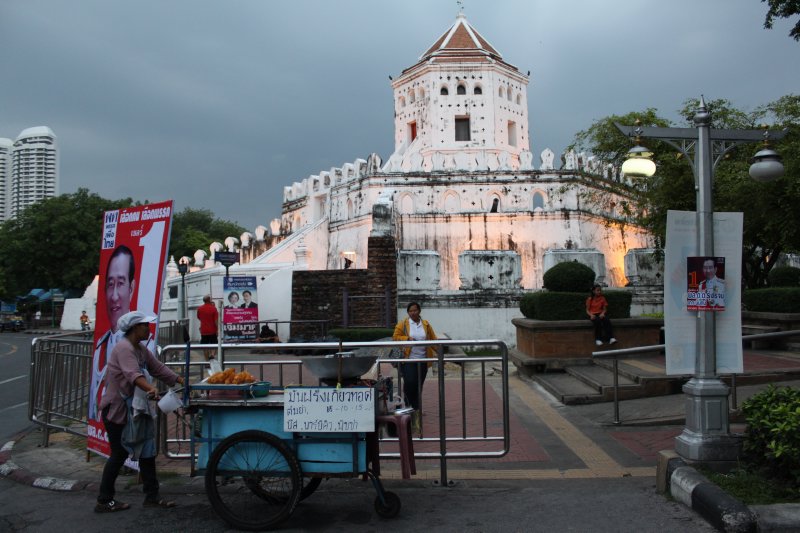 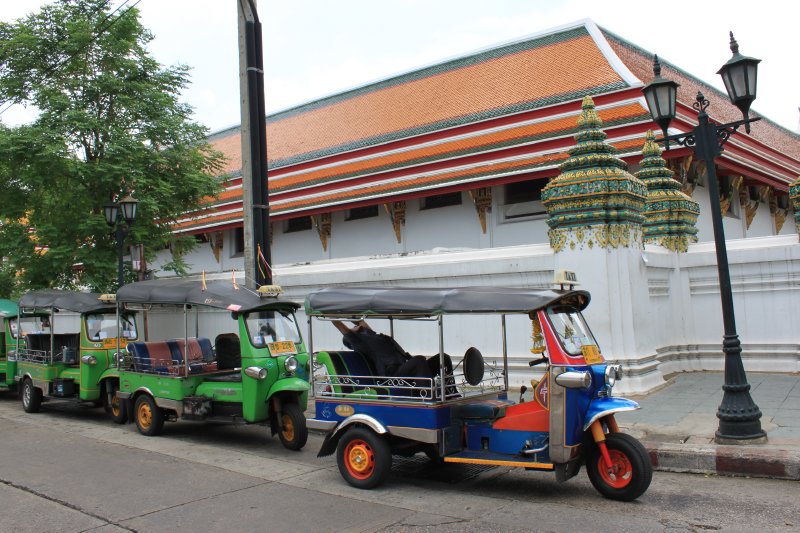 That night, after a quick feed at a local street stall back at Khao San we prepared our Indian Visa apps for the next morning and met up with Ellie and Steven; Woo hoooo, familiar faces! Things quickly got out of control as the ‘buckets’ disappeared into us and we went clubbing in Bangkok until 4:30am.

Three and a half hours, a quick spew, and a raging headache later, I found myself handing my Indian Visa application in at 8am. Wow, clubbing was a bad idea!

Ironically we also visited the Buddhist temples; Wat Pho, and Wat Arun, and took an hour cruise through the canals of Bangkok for 200 baht per person ($6.50), I dunno if that’s a good deal but it sounded alright so we just did it. 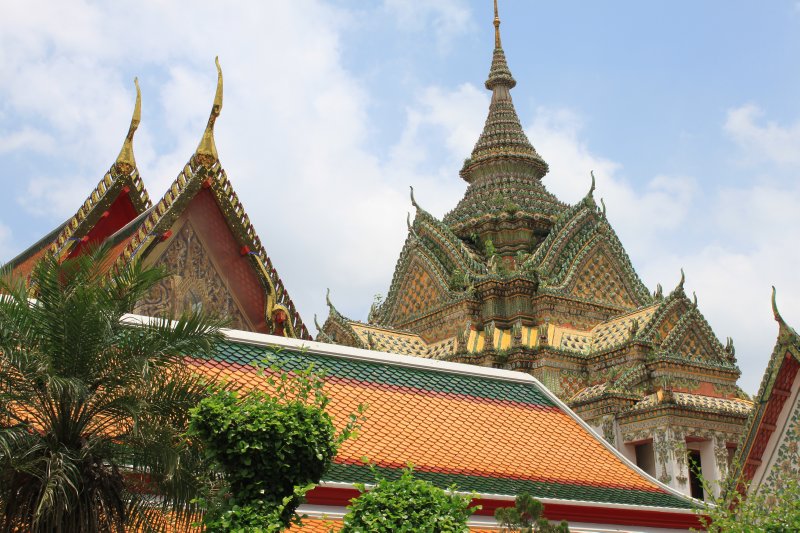 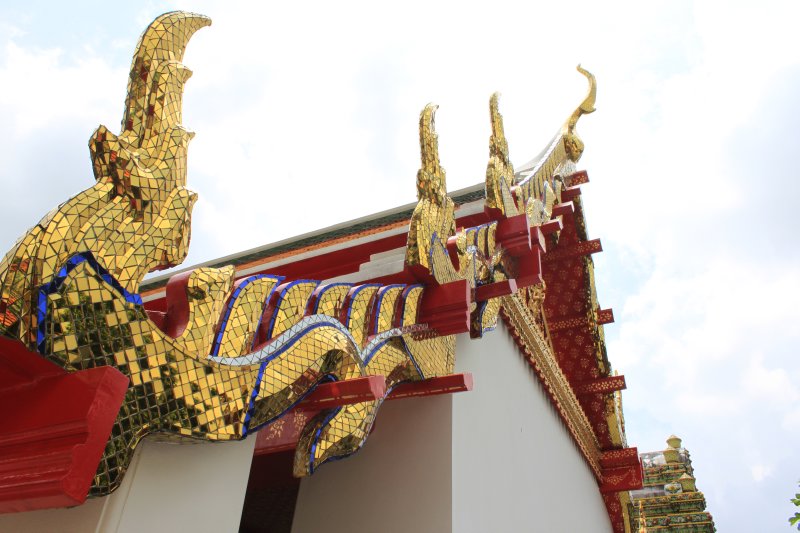 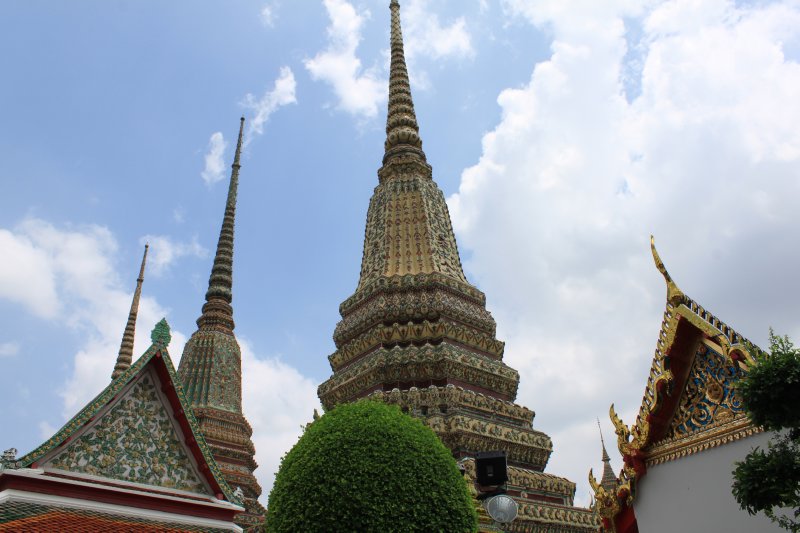 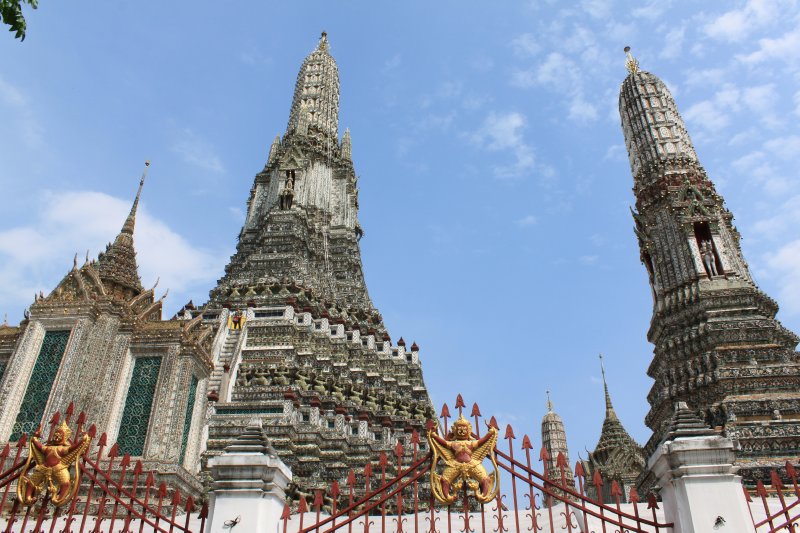 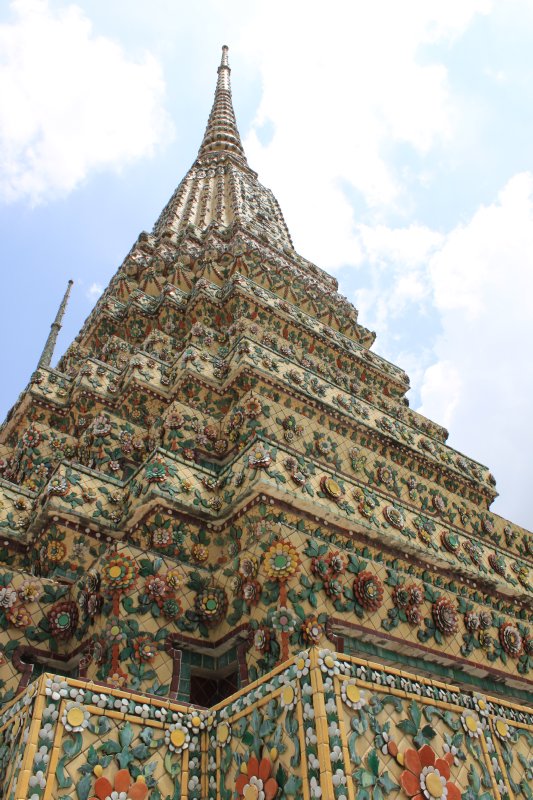 ^^ Amazing mosaics on this stupa 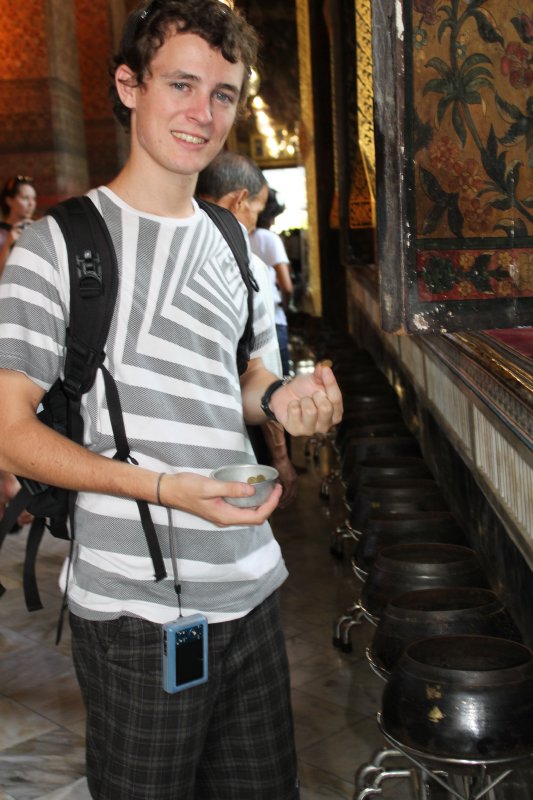 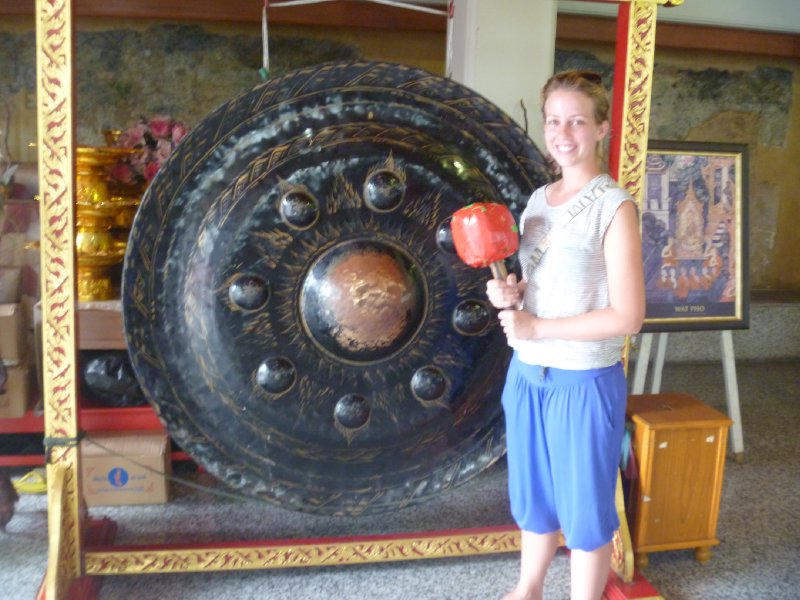 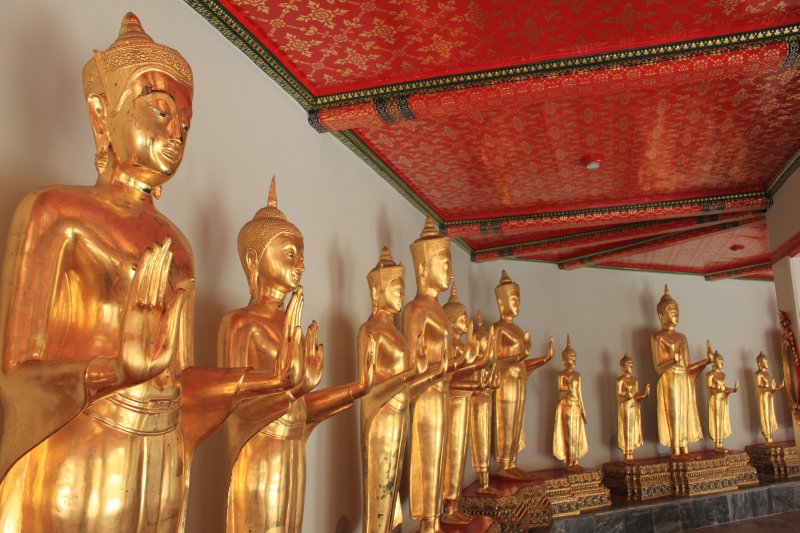 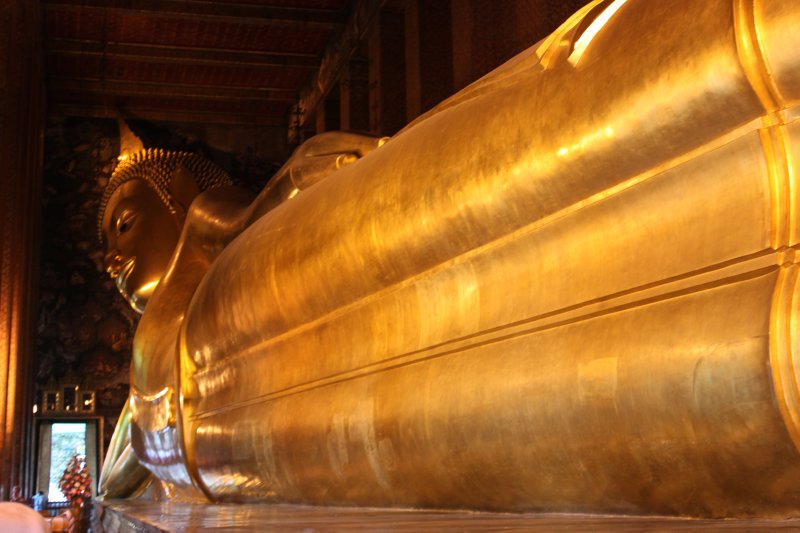 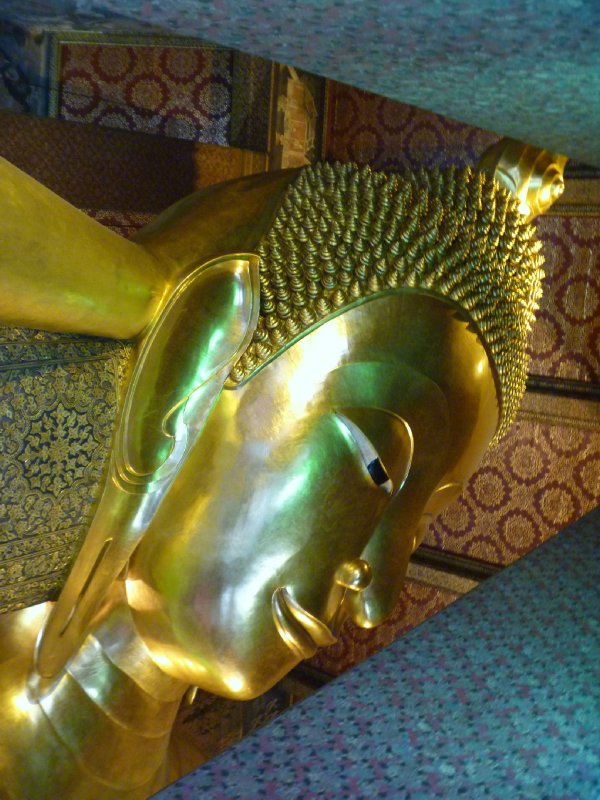 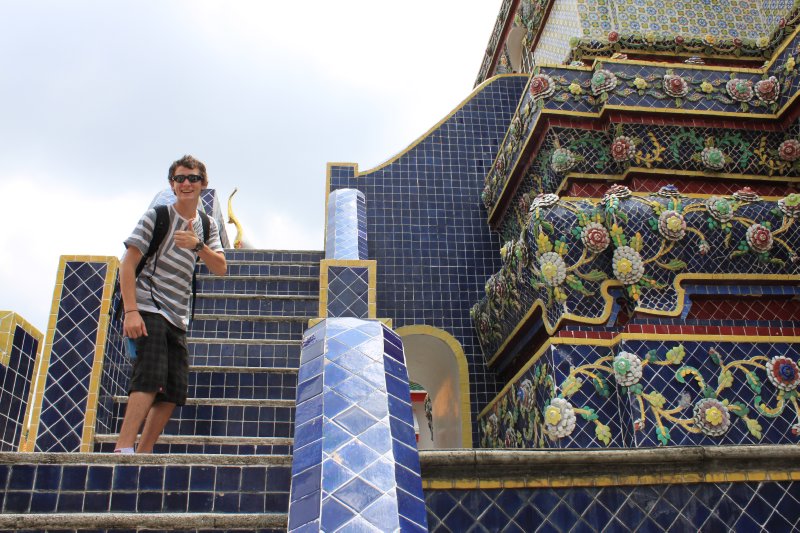 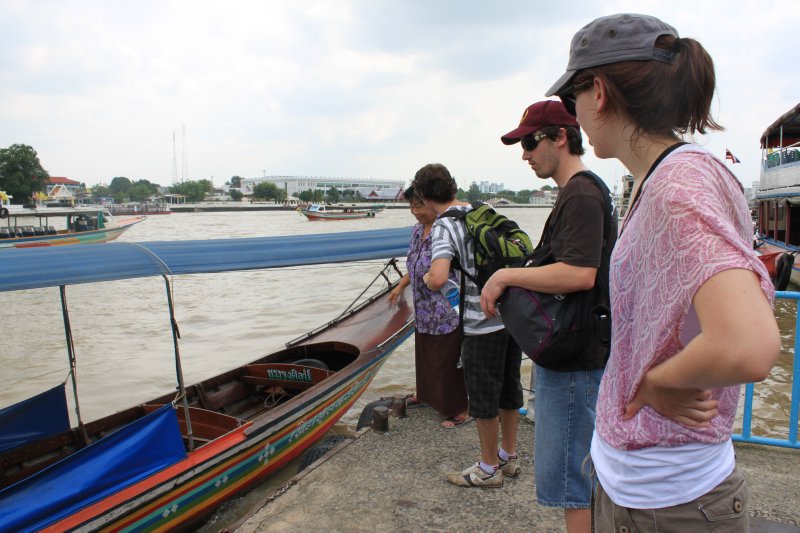 ^^ Bargaining for the canal ride 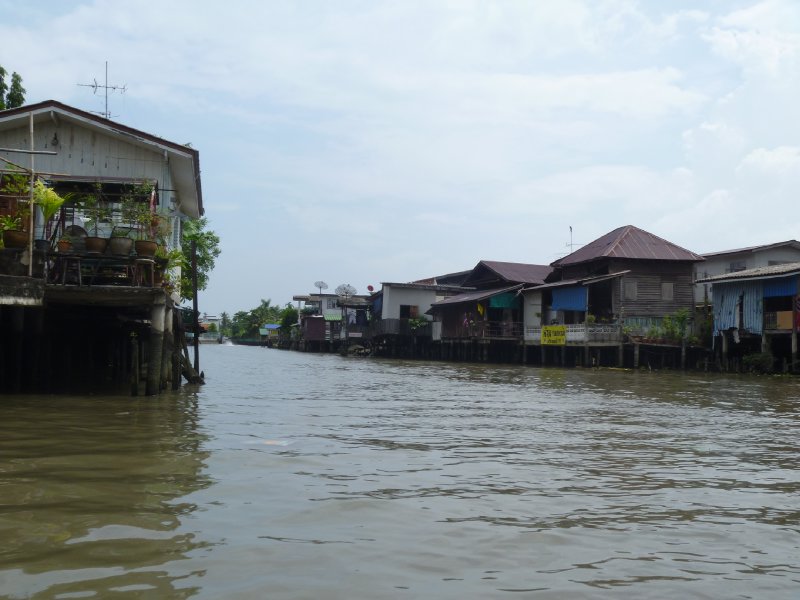 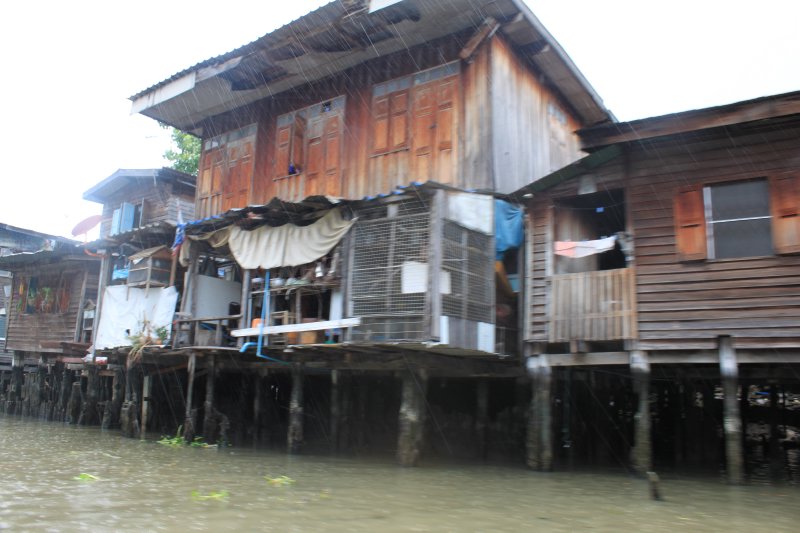 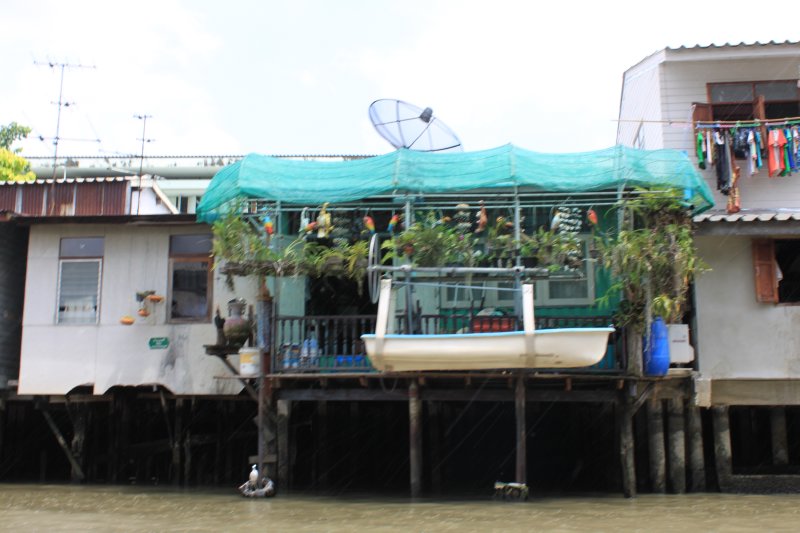 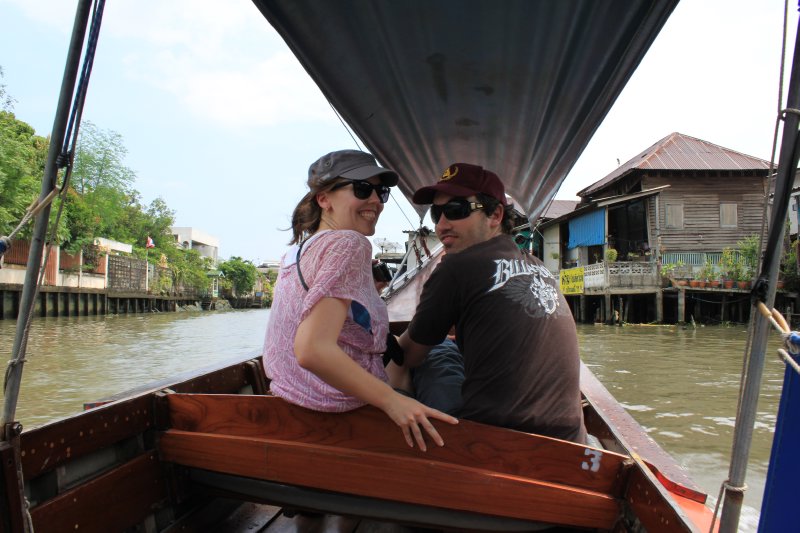 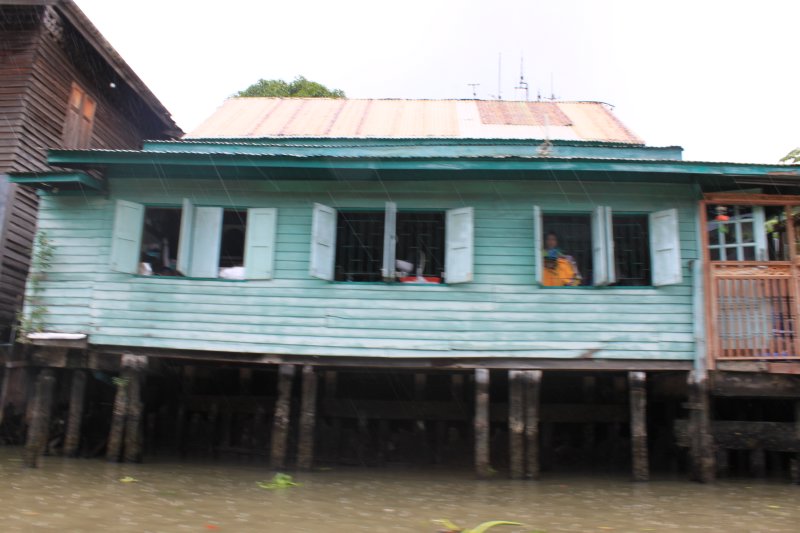 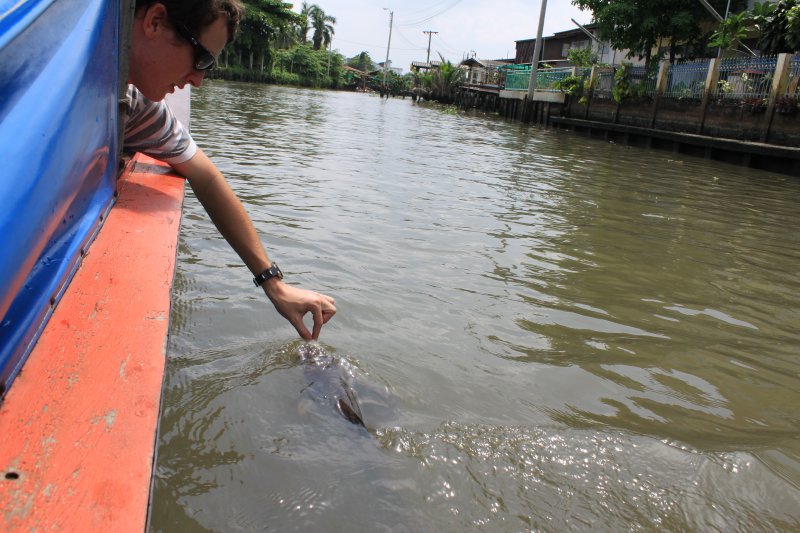 We then caught a taxi to Gold Mount where we enjoyed beautiful views and watched a lightning storm roll in from the horizon. We should have known that with giant clouds full of thunder and lightning, it would also rain. But like deer in the headlights we sat hypnotised by the storm until it started pissing down rain all over us and there wasn’t a taxi in sight! Idiots!
I volunteered to wrangle a taxi and stood out in the rain. After I was sufficiently soaked a taxi pulled up to where the rest of the guys were waiting in the dry, didn’t I feel like the good Samaritan, once again..Idiot! 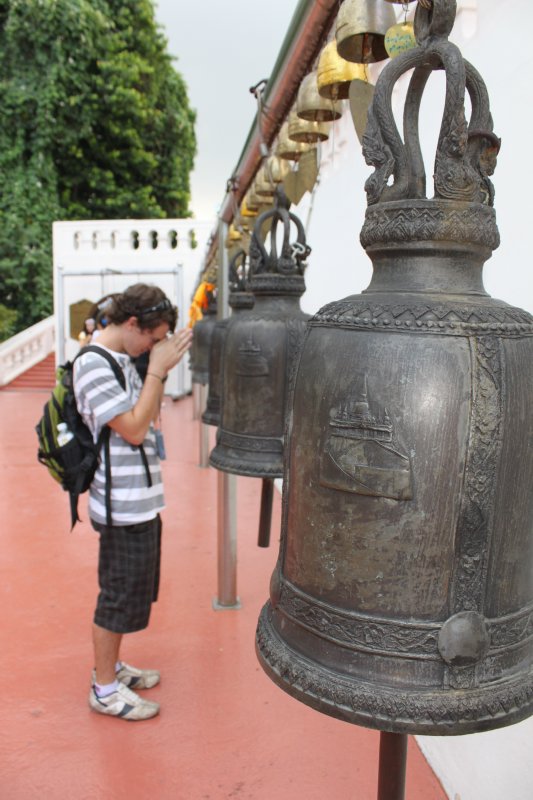 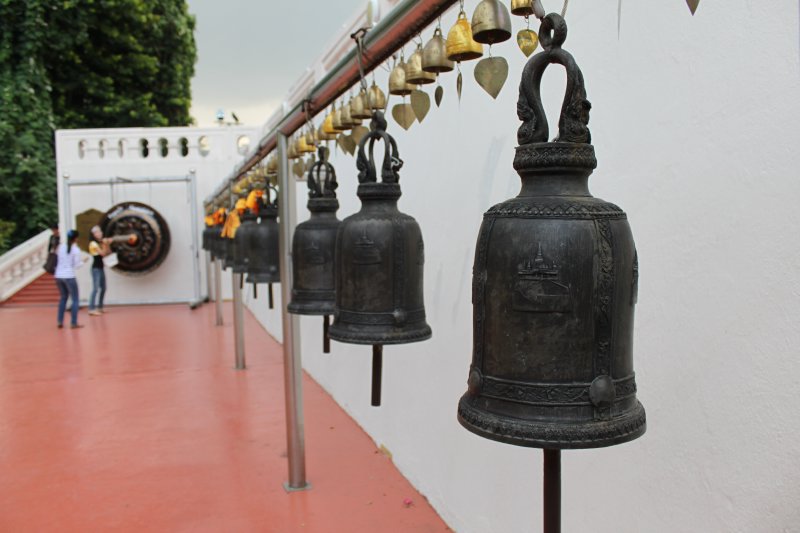 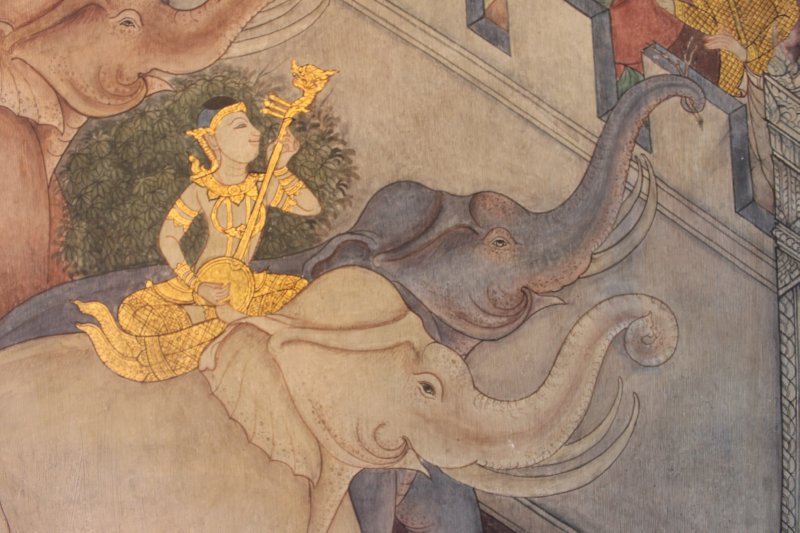 All in all though the day was awesome, the hangover wasn’t too intense and after a hard day site-seeing we headed back to Khao San and feasted like Kings (and Queens). I hope the rest of our time together is as good as the first night/day