After breakfast we met up with Lot and headed out to the Killing Fields of Choeung Ek. It’s a former orchard about 20km south of Phnom Penh where the Khmer Rouge executed around 20,000 people between 1975 and 1979. 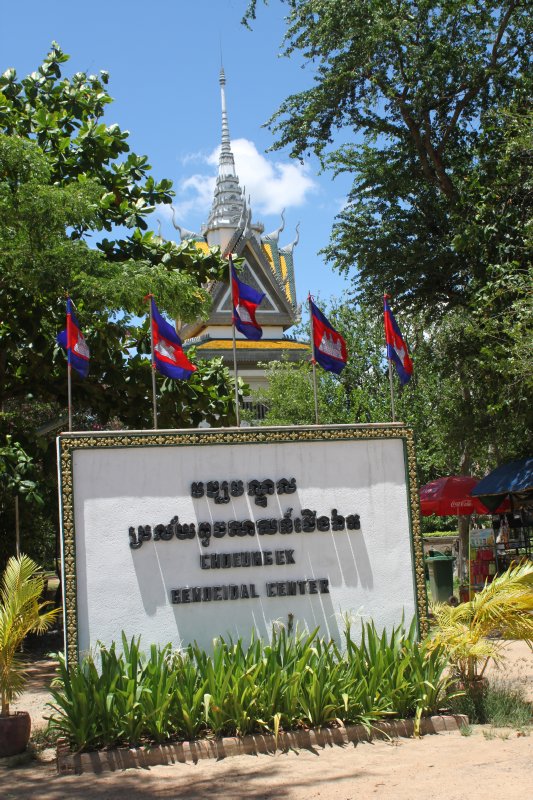 The Khmer Rouge was the name of the followers of the Communist Party of Kampuchea which seized power in 1975 after it defeated the former government’s forces. Not long after Pol Pot’s Khmer Rouge took power the genocide, torture, and widespread famine began. The Khmer Rouge intended to turn Cambodia into a self-sufficient, classless society. They closed schools, hospitals, factories, and completely removed finance and currency. Major cities were completely evacuated with the entire populations sent to working camps. Anyone rich, popular, well educated (wearing glasses was enough proof) or had the ability to undermine the new regime was executed on the spot or taken to a number of torture camps and prisons - which often resulted in forced confessions of treasons – resulting in execution.

In 4 years of harsh ruling the Khmer Rouge was responsible for 2 million deaths, and Choeung Ek is just one of many sites that were dedicated to this atrocity. Most of the people killed here were from Tuol Sleng prison (which we will visit after the killing fields).

As you walk around you can see all of the mass graves that have been uncovered, some that held 8,000 bodies. From the clothing they recovered from the mass graves they can tell that some were specific to men, women, soldiers, and women with their babies. 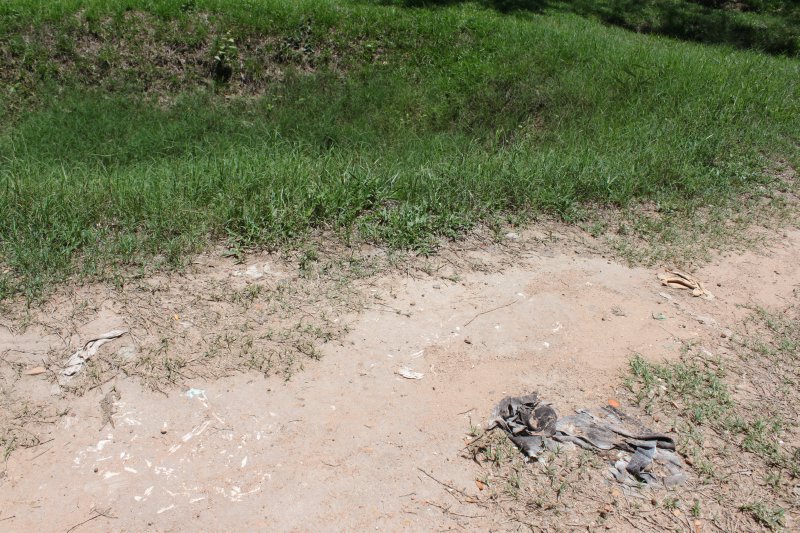 There is a giant tree that they claim was used to smash the newborns and small infants heads on to save on ammunition; a truly disturbing thought. 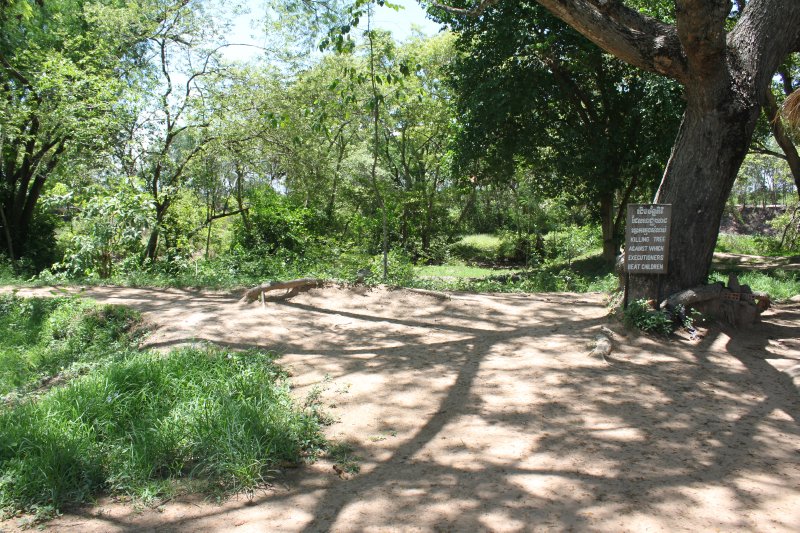 As you walk around the grounds you may notice teeth and other bone fragments, as well as clothes just under the surface of the ground – new bones and clothing rise up after the rains, and we were visiting just after some rain. At one point I saw a bit of white poking through the dirt, I started digging thinking it was a small fragment, but soon realised it was much too big to dig out – possibly a pelvis. 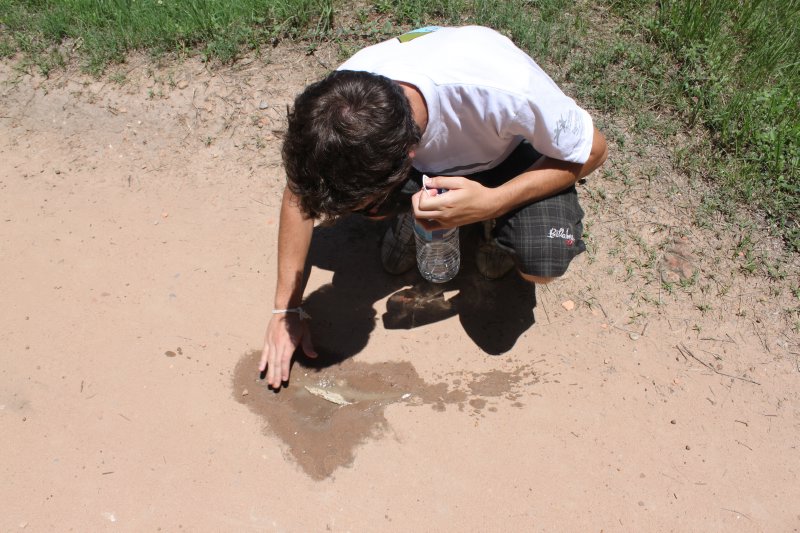 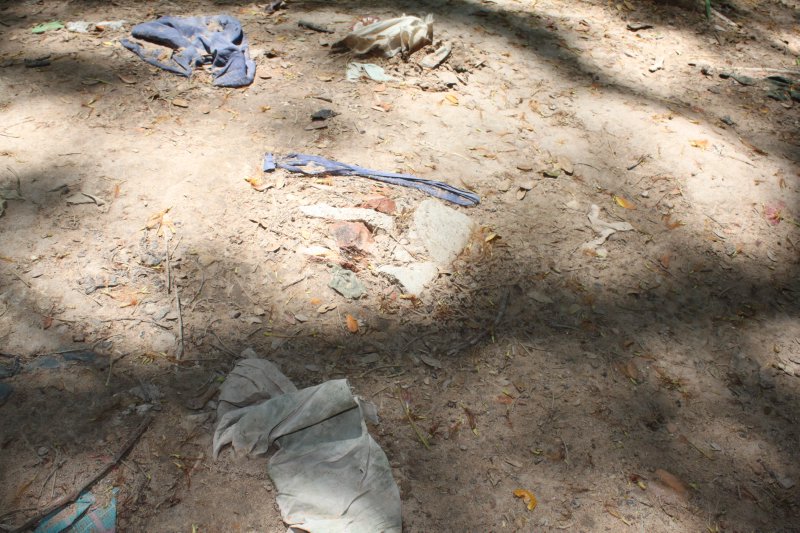 ^^ Clothes rising from the recent rain 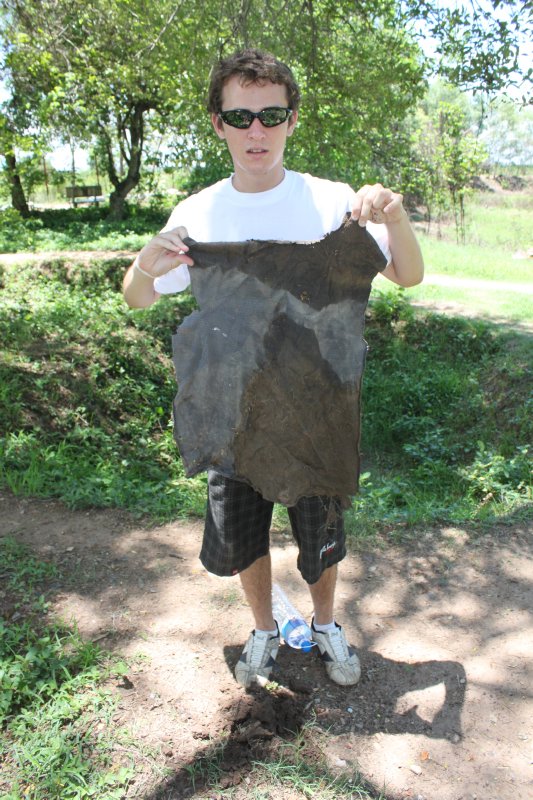 ^^ A woman's shirt I pulled out

There is a memorial stupa set up within the grounds that contains over 5,000 skulls as well as various other bones; they are arranged by sex and approximate age. Many of them have been smashed in from behind – usually by a hammer, pickaxe, machete, or shovel, or have single bullet holes through the top. 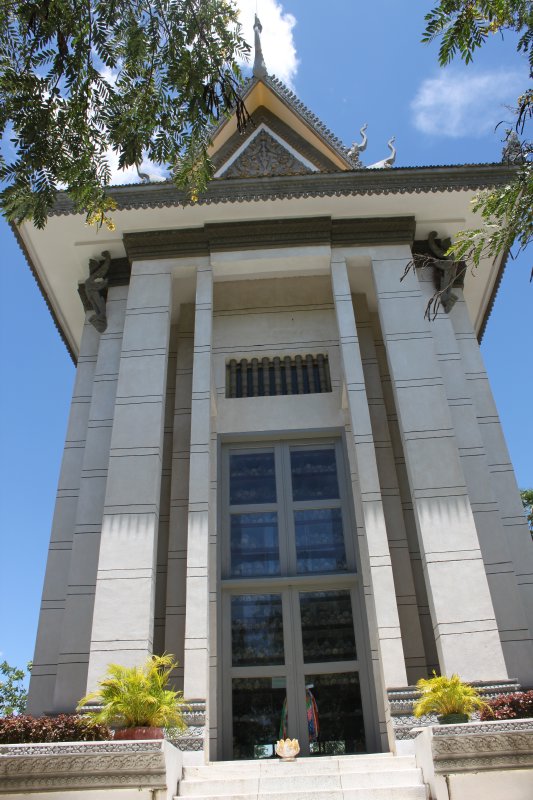 ^^ The shrine to the victims 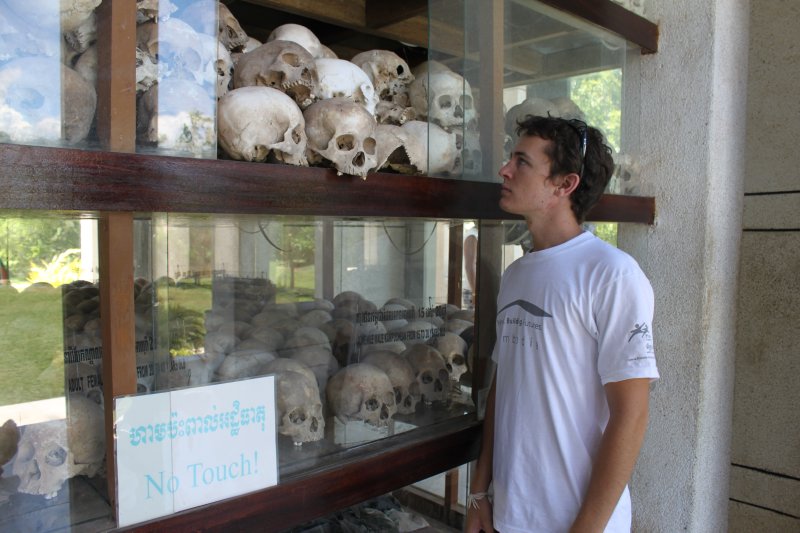 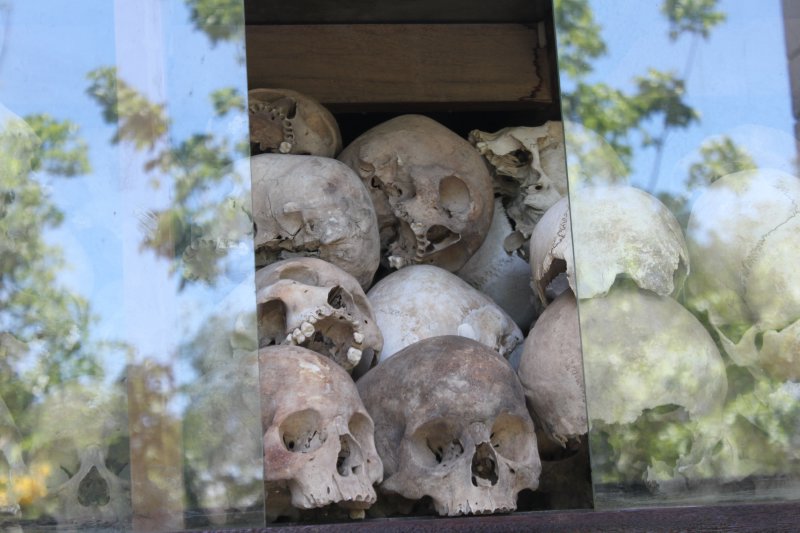 It was definitely an eye-opening and disturbing look into Cambodia’s history, but I think it is important not to ignore these sorts of confronting truths, as to make sure they never happen again anywhere in the world.

Our next stop is Tuol Sleng prison, where many of the people executed at Choeung Ek spent their last days.

Tuol Sleng prison wasn’t always a prison, in fact before the Khmer Rouge won the civil war it was a high school in central Phnom Penh. Four months later it was renamed Security Prison 21 or S-21, and classrooms became cells and torture rooms. 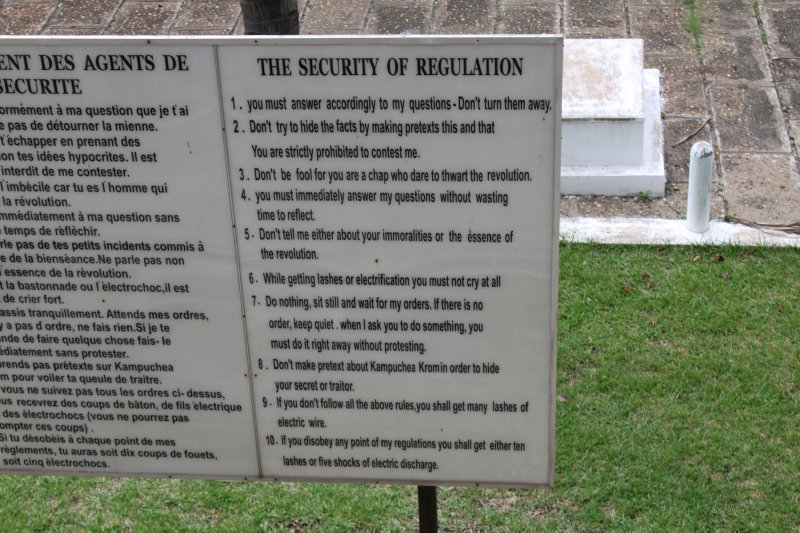 ^^ The rules of Security Prison 21 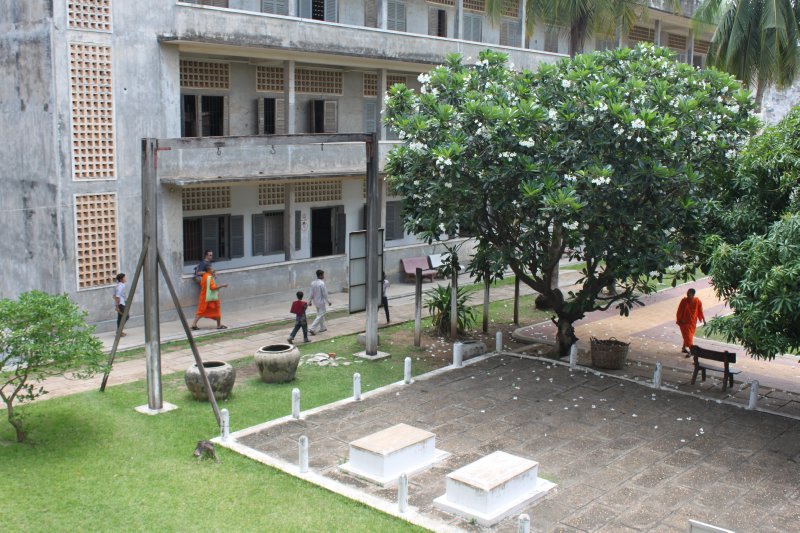 ^^ Once a place of learning - now haunted by death 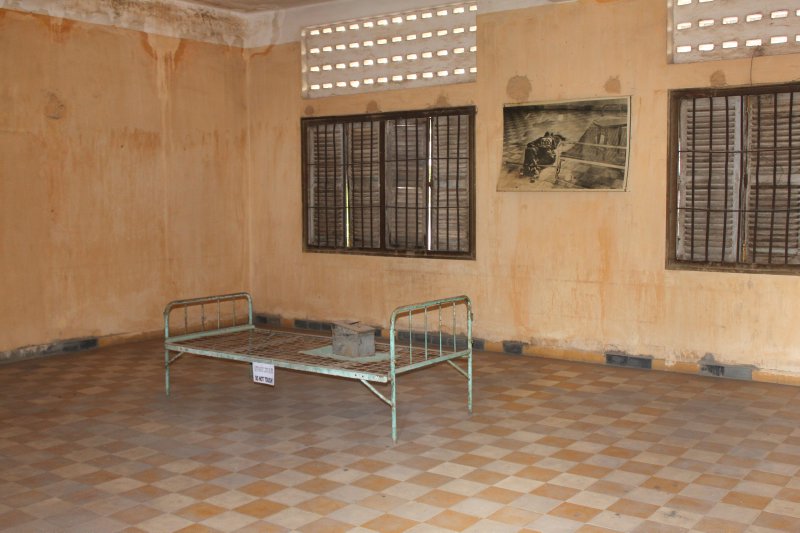 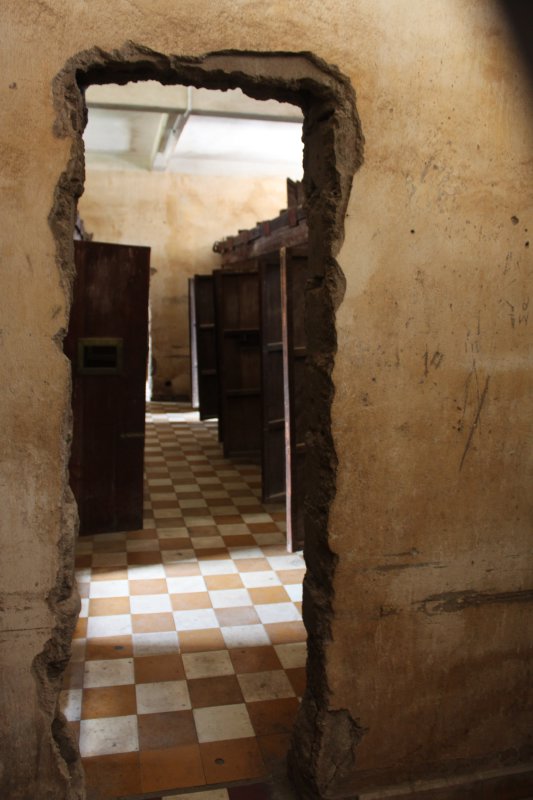 ^^ Entrance to the cells 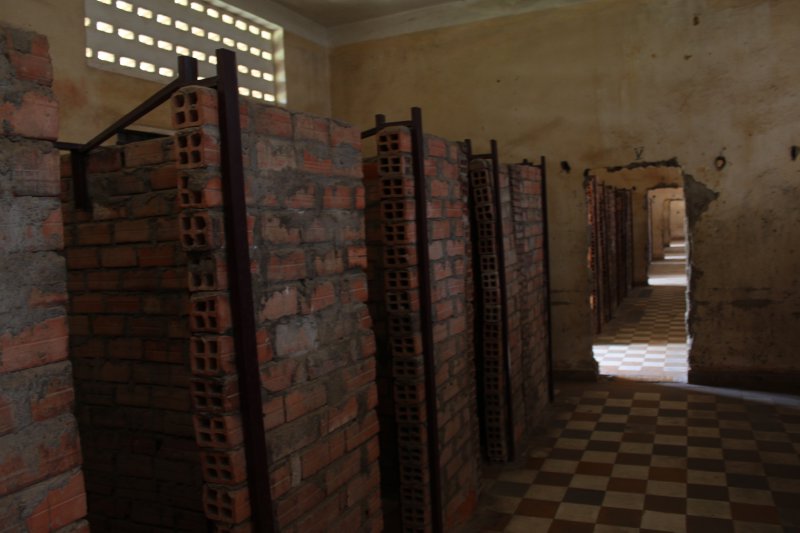 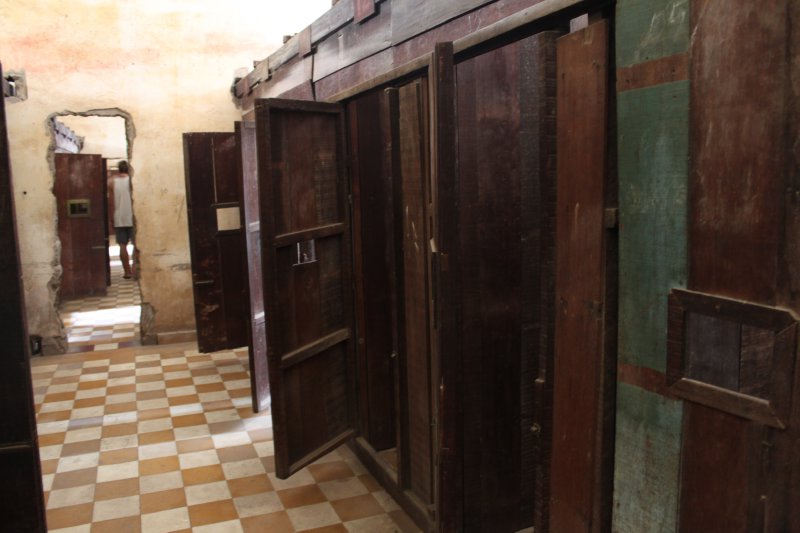 ^^ The classrooms were divided into many cells

The people sent here were repeatedly beaten and tortured until they confessed that they were traitors as well as name their family and friends, which would then result in their arrest and torture. In fact if a family member or friend of yours was arrested it was almost guaranteed that you would be arrested not long after, and destined to confess all of your family and friends as traitors as well. 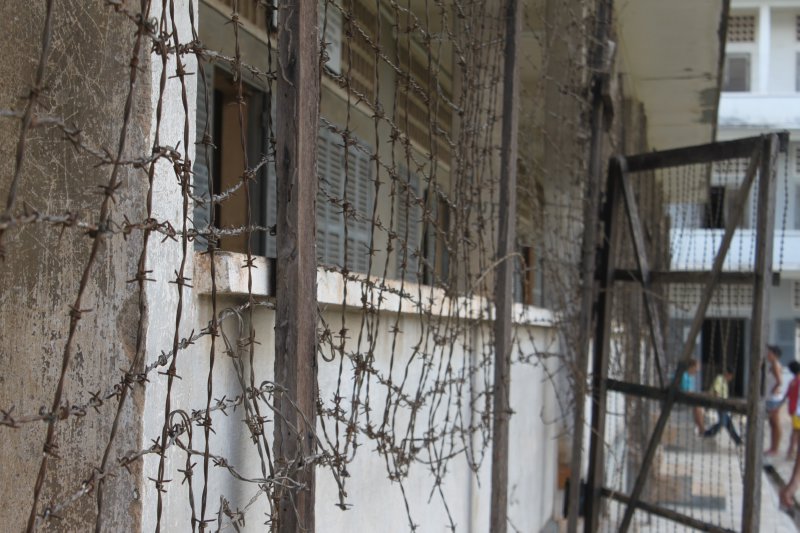 ^^ Barbed wire on the upper floors to prevent suicide

The staff at S-21 documented almost everyone who passed through the prison with a personal dossier and photograph, although the photographs were separated by the dossiers so many of the faces have no names to match. Several westerners were also captured and brought to S-21, many of them sailors who accidentally drifted into Cambodian waters and were captured as ‘C.I.A spies’ – to which most of them confessed after many weeks of torture. 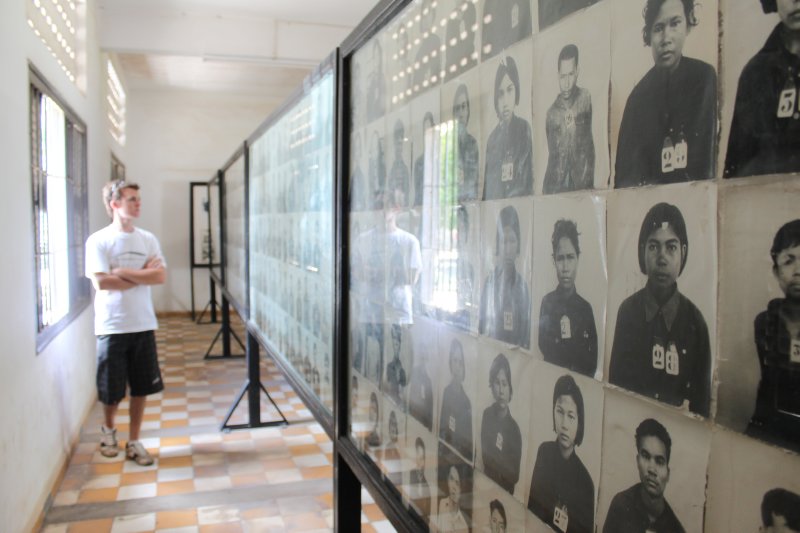 ^^ Recovered photos of the people who passed through S-21

We have had a fairly intense day today, we learnt about many atrocities and hardships. I will never forget Tuol Sleng Prison or The Killing Fields, and I hope the world never lets this sort of thing happen again.

Feels weird writing this, but tomorrow we are off to the zoo.