Today was our first day in southern Thailand and what better way to introduce ourselves to this paradise than with a day trip around Phi Phi Island!

We were picked up by a minibus and taken to the dock where we each received an orange sticker and pointed in the general direction of several boats. Things got weird when we were rushed at by five Thai people who promptly each took our photo without saying a word. Our initial thought was that they would sell them to the news if they lost us, but it turns out they print your awkward mugshot onto a small plate with the hopes that you will purchase a plate with a surprised you on it, we passed on this one.
We went with Sea Angel cruises and it cost 950 baht which is around $30. It took 1hr 30min to get out there but a few beers and a cup of noodles made time fly.

On the way to Phi Phi Don we passed by Phi Phi Lay and got to see Maya Bay, where Leonardo’s ‘The Beach’ was filmed; a really beautiful spot, but didn’t see any football field sized marijuana crops. 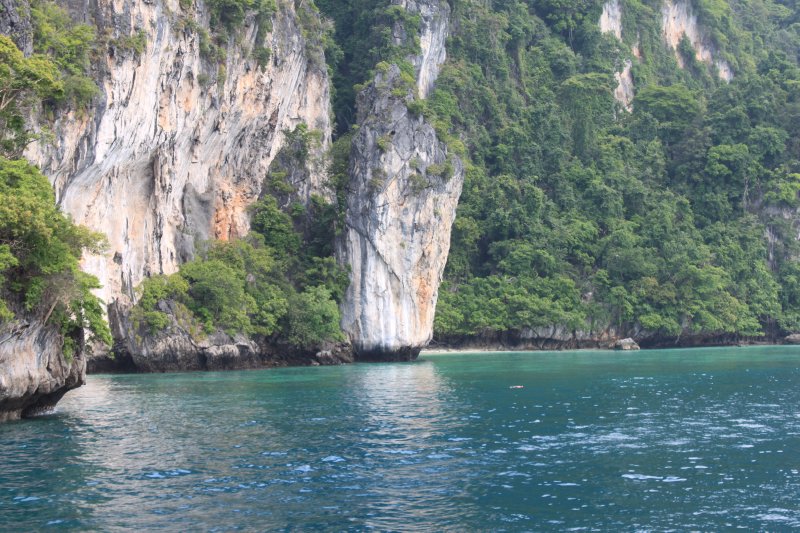 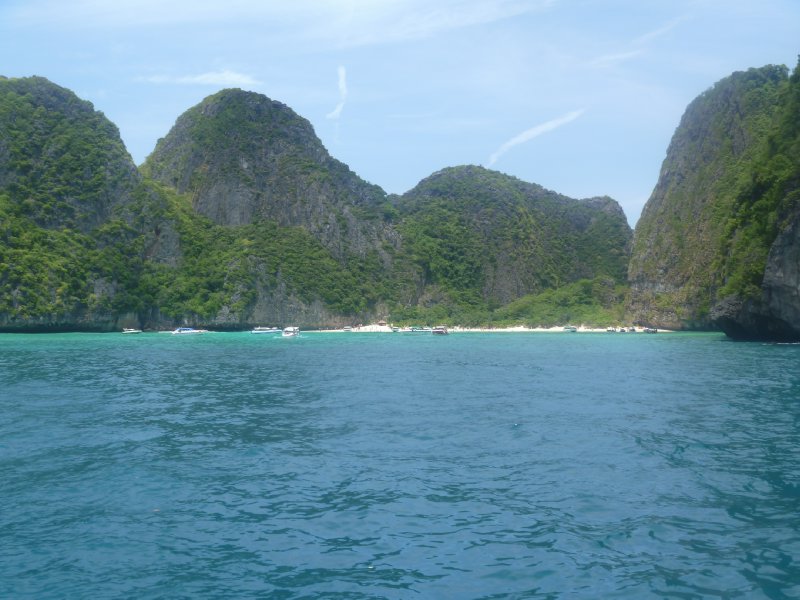 We also stopped by ‘Monkey Beach’ where hordes of tourists unload onto a 20 meter strip of sand and feed the sort-of-tame monkeys fruit and nuts. There is also a really nice patch of reef off the beach with tons of fish – also lured by food – which is where we spent most of our time. We also did a bit of kayaking but that only lasted a few minutes as the temptation to hop in and snorkel was too great 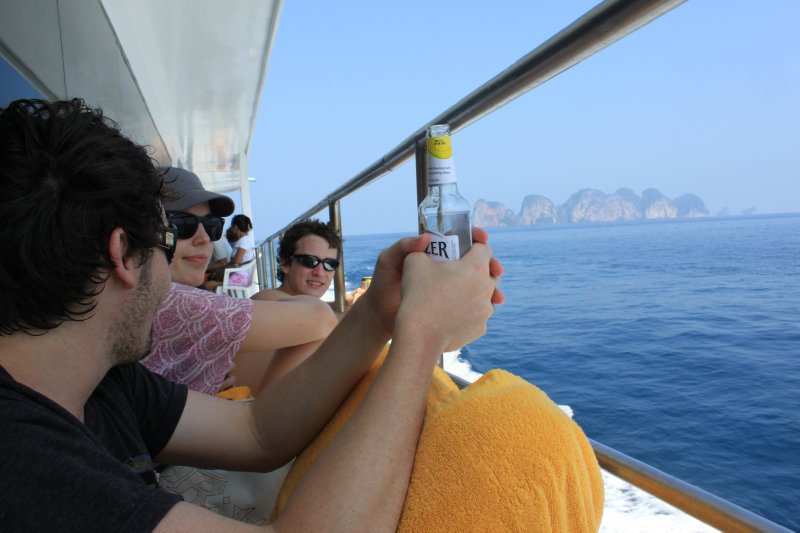 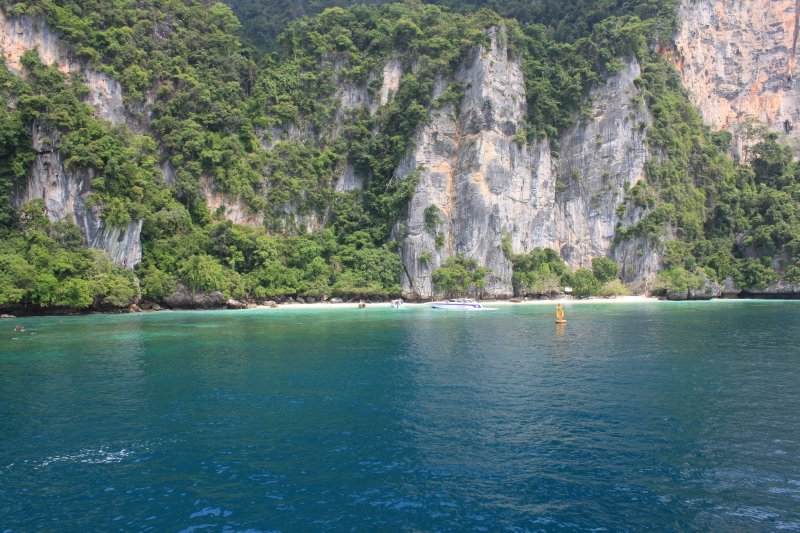 We then had a buffet lunch on Phi Phi Don which I must say was very delicious, and then headed out for some more snorkelling. We didn’t get very many pictures because we spent most of the day in the water and didn’t particularly want to carry the camera around and then leave it on the beach while we went in. 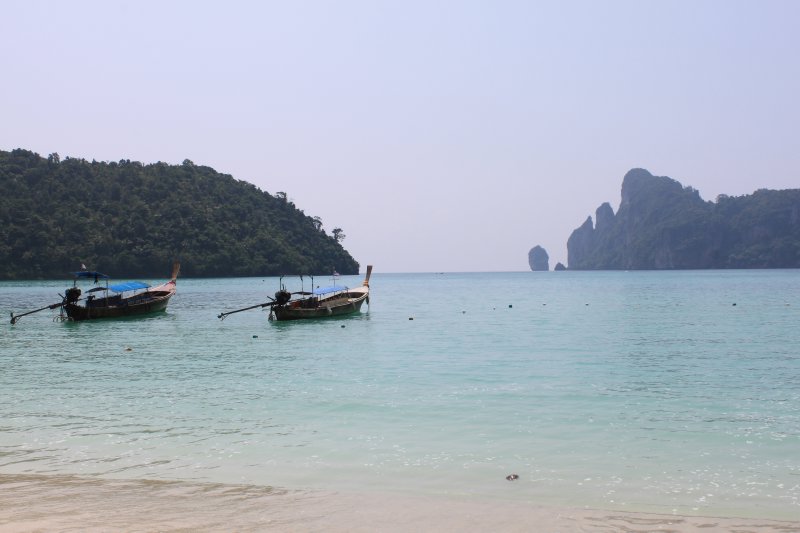 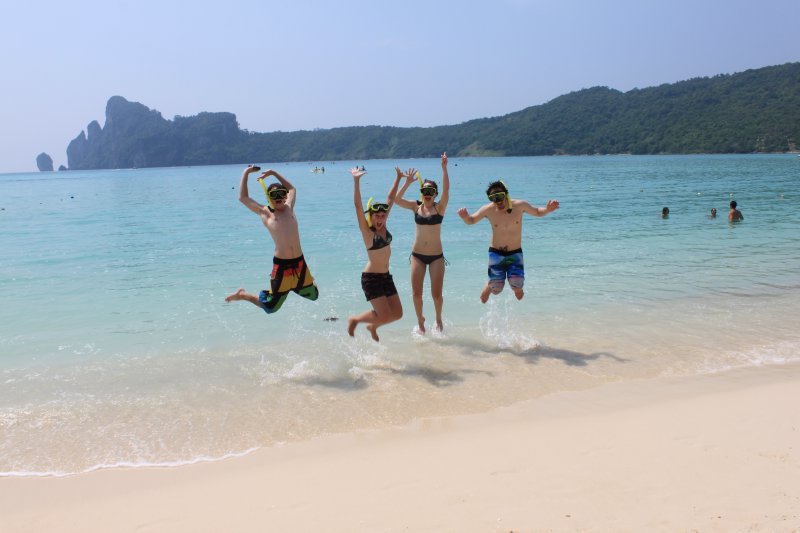 ^^ haha cracks me up every time I see it!

On the way back we had a few more drinks on the boat and relaxed in the setting sun.

When we were back on Phuket Island Ellie and Steven rushed off to ‘Fantasea’ – a circus-esque show, while Kirby succumbed to a day in the sun and had a nap. I on the other hand headed down to a bar and watched the State of Origin where Queensland thrashed NSW…again. All-in-all a great day; nothing better than sun, friends, snorkelling, eating, drinking, football, and monkeys