We arrived in Mui Ne at about 2am. Mui Ne itself is just a one street town on the edge of the beach, with pubs and clubs lining the beach front, and hotels and housing scattered along the other side of the road. The bus just kicked us off at the edge of town and drove off before we even had a chance to wake up and get our bearings. Immediately we were surrounded by harassing motorbike riders who insisted on taking us to a good cheap hotel for $15 - $20. We had learnt by now that the going rate for a motorbike ride is around 50 cents a kilometre and Mui Ne itself is probably only 10km long at best, so we passed on their offers and decided to try and find something ourselves. However, the motorbike riders in Vietnam have some supernatural ability to sense uncertainty and getting away from them was impossible. In Ho Chi Minh there is no closing time and nearly every hotel had a receptionist that slept in the lobby, effectively making them 24hr, Mui Ne on the other hand was most definitely shut! We anxiously walked the strip of Mui Ne looking for any sign of life apart from the creepy man on the motorbike shadowing us into the darkness. Tensions were rising as he kept on swooping in informing us we were lost and we needed him to help us. With thoughts of back alley murders creeping into our minds we needed to get away from him, so we found a gate that was partially open and we walked up into a pitch black property with no idea what was up the top of the driveway. No one was awake and there were no lights on so we started yelling Xin Chao (Hello) into the darkness. Thankfully two Chihuahuas woke up and ran over to us causing a ruckus. It wasn’t long before an old couple came out and we asked if this was a guest house, luckily it was, and for the first time in an hour we felt safe again.

In the morning after the sun was well up we ventured out to see what Mui Ne had to offer. A few quotes from our Lonely Planet guide book include; “The best all-round beach in Vietnam”, “Activities abound”, “You’ll smell Mui Ne before you arrive, and you’ll see the pungent source in clay vats along the palm-lined road. This is nuoc mam (fish sauce), for which Mui Ne is famous”.
In our two days in Mui Ne we probably saw about 20 tourists in total, it was almost like a ghost town. The beach appeared to have been hit by a large storm and suffered massive erosion; the stairs down onto the sand hung two meters above the beach itself. There were no beach activities occurring while we were there, although it obviously had a history of wind/kite surfing from the various street advertisements. Our nostrils weren’t even assaulted with the thick scent of fish sauce as we failed to encounter a single clay vat during our entire two days.
Mui Ne was a real shame for us as we had read so much great stuff about it.
We’re not sure why it was like that when we arrived. Maybe it’s just past its hay-day, or we came during a lull, but whatever it is, Mui Ne didn’t live up to its reputation. Maybe next time we visit Vietnam, we’ll stop in sleepy Mui Ne to be greeted with a lively beach town that we so sadly missed. 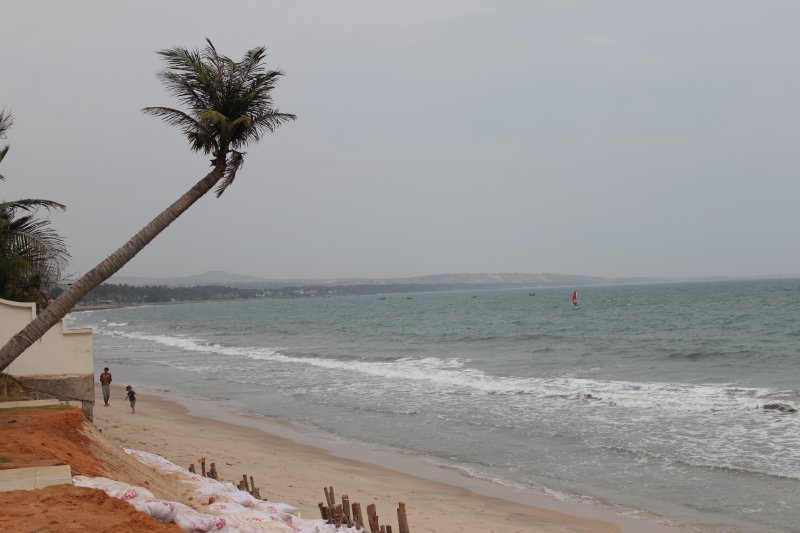 Our next stop is Dalat, a mountain city in the central highlands that prides itself in its flower and strawberry farms (yum!).