Battambang - A Bamboo Train and A Broken Speedboat

We finally arrived in Battambang after another epic bus journey; I realise I’m getting a bit repetitive on this whole ‘bus trip’ ordeal, but it is most definitely the worst thing about backpacking. The cheap hotels next to nightclubs with their insect infestations, the ratty looking restaurants with real rats, the toilets with no toilet-paper; it’s nothing compared to horrendous, DVT inducing, bum numbing, 15+ hour bus rides, they suck sooo bad! Anyway I guess it’s all part of the experience and it makes reaching your destination all the more exciting.

When the bus did arrive it was around 9pm and we were greeted with the usual rowdy mob of tuk-tuk drivers wanting to take us to their hotels. It was really intense; we couldn’t escape the mob that surrounded us screaming out their prices for the ride to various hotels. Business must be down because the prices started at $2, then $1, then 50 cents and then they were all scrambling over each other and yelling ‘for free!! For free!!’ (The whole idea with free rides to the hotel is to sweet talk you into a day tour with them tomorrow). I noticed a guy just sitting next to his tuk-tuk chilling out not trying to trample us to death so I pointed to him we hurled ourselves into the back of his tuk-tuk and left the angry mob behind us. On the way to the hotel we found out his name is Sam Ol and his style is to hang back and let the tourists make their own mind up. It definitely worked with us, we would much prefer a passive driver willing to take us wherever we want to go than a worked-up, aggressive business man forcing you into his tuk-tuk. He was young like us and had a good sense of humour so we organised for him to pick us up the next morning and take us around town on a day tour. 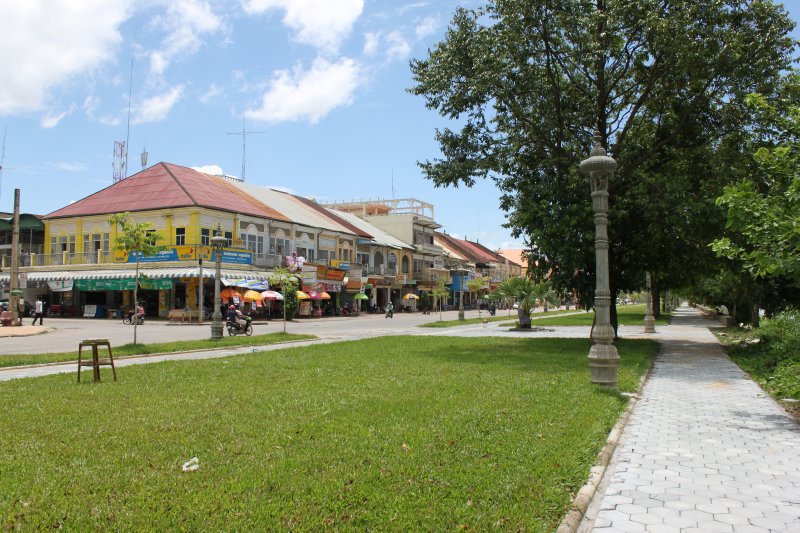 The day tour was awesome. It’s so easy with a local showing you around! We visited heaps of temple’s including Prasat Banan temple, and Phnom Sampeau. When we stopped and had noodle soup for lunch Sam Ol sat opposite and read us the newspaper to practice his English, which is already very good. He has a hilarious book full of ‘proverbs’ that other tourists have written down and ones he has found in books. We wrote a few extras in his book for him; he quite liked ‘Never smile at a crocodile’ and ‘She sells sea shells by the sea shore’; he kept practicing them all day with varying degrees of success, really funny though. 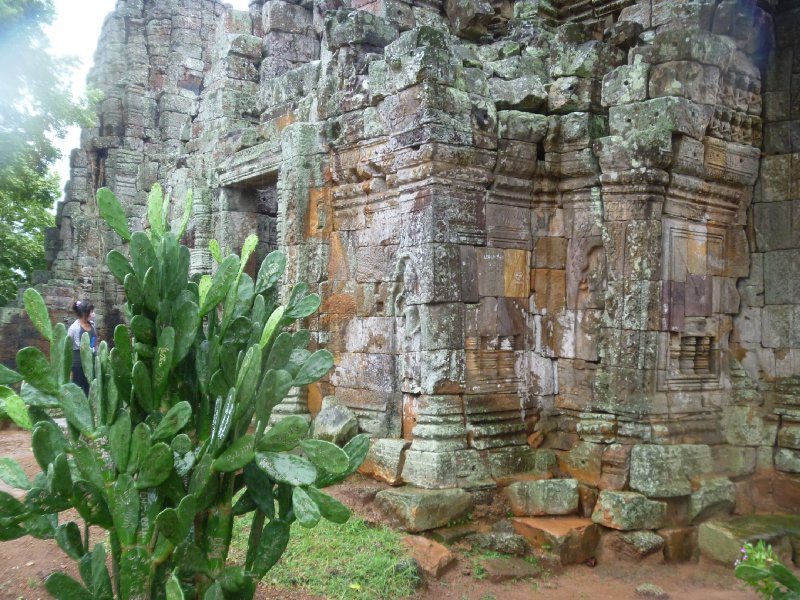 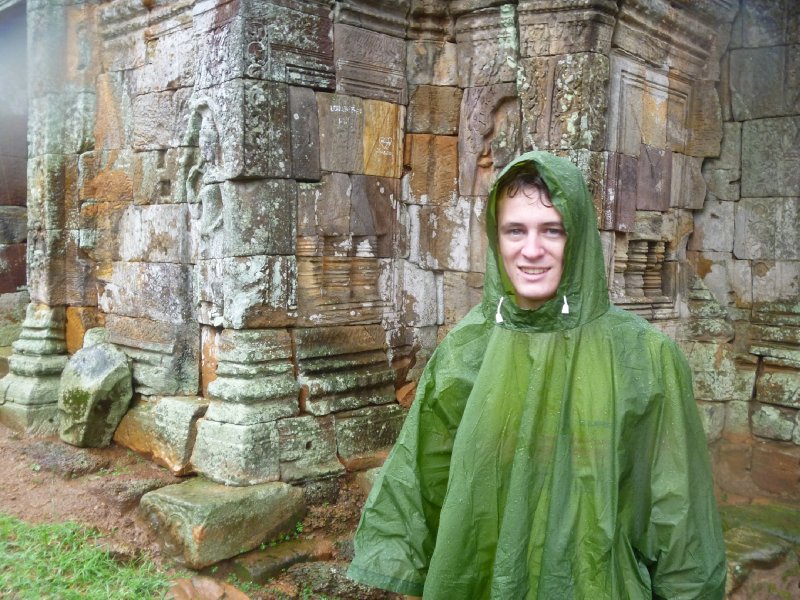 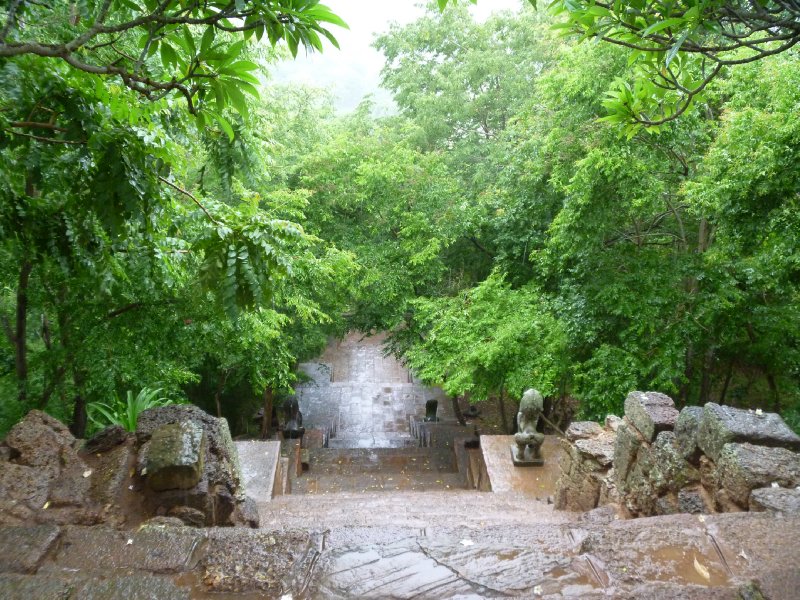 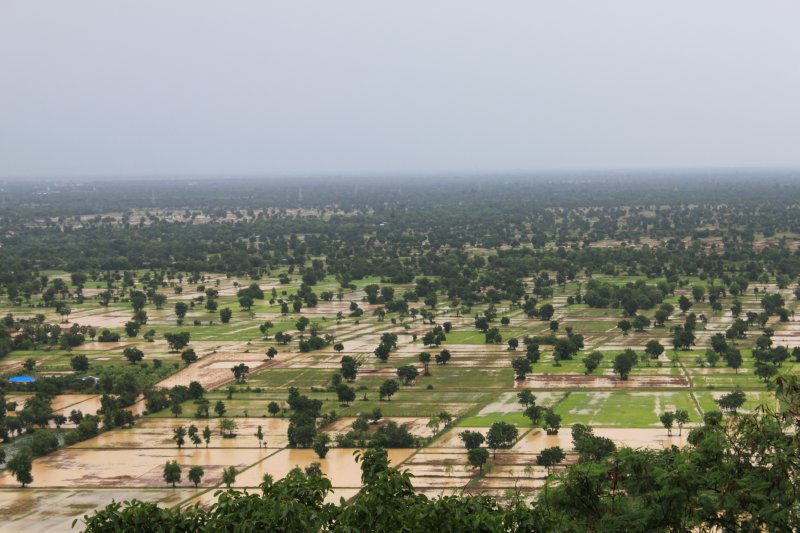 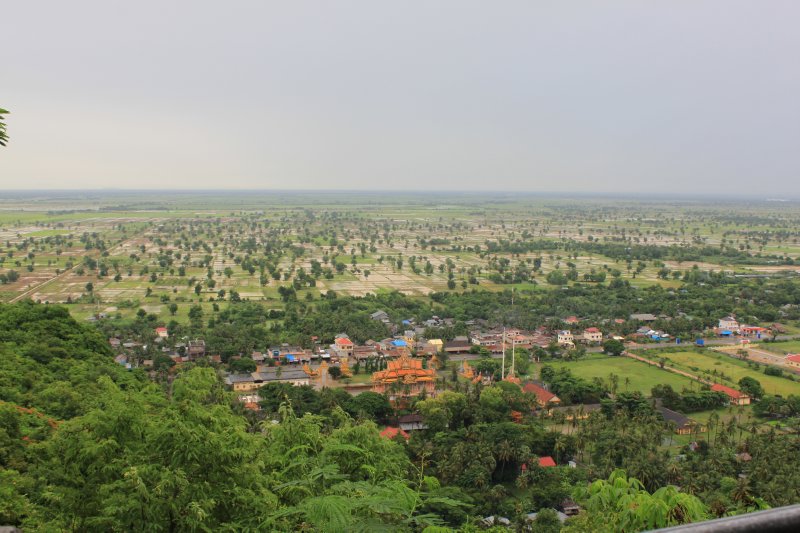 We rode the bamboo train – a frightening experience! It’s a small bamboo platform that rests on two train axles with a large engine. They go both ways on the track and when you meet another train one of them disassembles to let the other through. The rule for which train has to be pulled apart is the one with the least people on board, however a scooter trumps people and live animals trump scooters. The ride itself is scary and the sections of rail don’t actually meet up square, so every join you approach you cross your fingers and toes and hope that the momentum will carry you across onto the next piece of rail line with a loud crunch. The lines are also warped from the heat so some sections you sway from side to side hoping not to flip. We definitely got our adrenaline rush for the day, although it was unexpected with Sam Ol telling us it was a pleasant ride on a local form of transport haha

. You better get in quick if you want to experience this train ride because the government has plans to re-lay the tracks so large trains can use it again, which means no more bamboo trains allowed. Note: I also have a video to upload of the train but because I am trying to do it within China the government is blocking it. 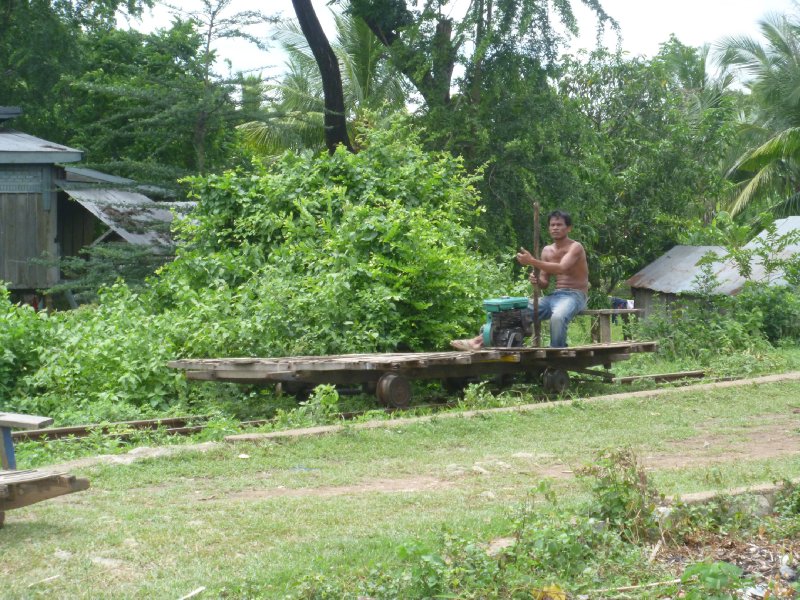 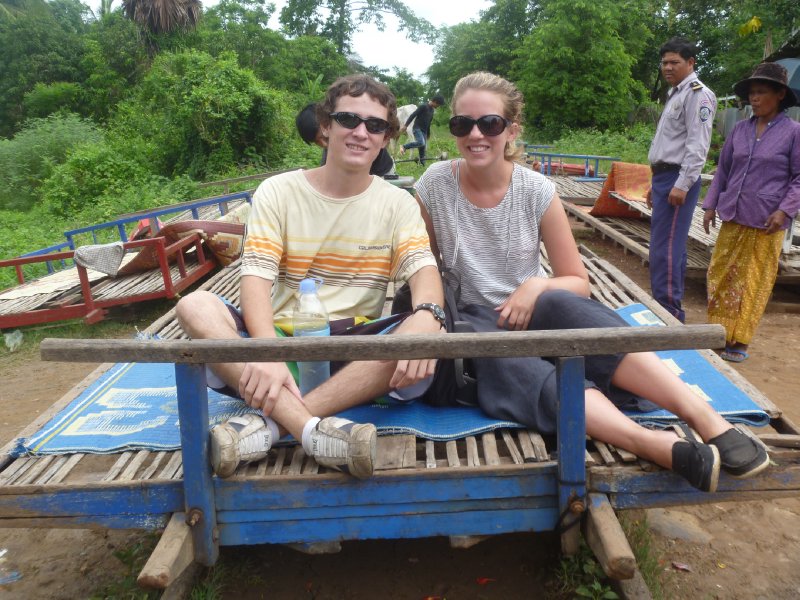 He then took us to a massive mango tree to show us the bats. Apparently the locals catch them and drink their blood because it’s good for your eye sight. I tried to explain to him that in Australia a popular saying is ‘Blind as a bat’ which really confused him, because the locals admire how they can fly around in the pitch black. That’s when I really confused him and tried explaining echo-location, and in fact if anything should improve from drinking bat’s blood it should be your hearing. He was puzzled but I wrote a definition in his book and he vowed to research the topic more

. Perhaps next time we visit, the village will be drinking the blood for hearing. 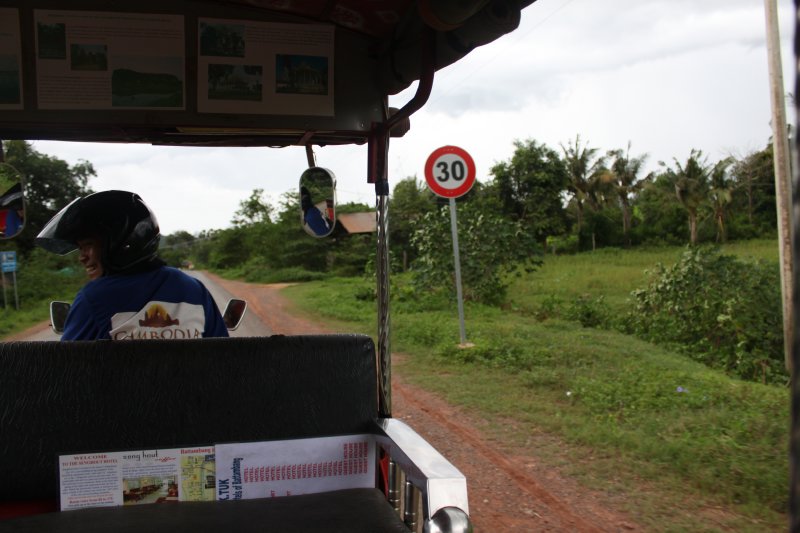 ^^ Enjoying the sights from the back of Sam Ol's tuk tuk

At the end of the day we went to a local bar and had a few jugs of beer with our new friend Sam Ol. I definitely recommend him as a guide/driver and if you find yourself in Battambang give him a call, his number is on the back of the tuk-tuk in the picture below. 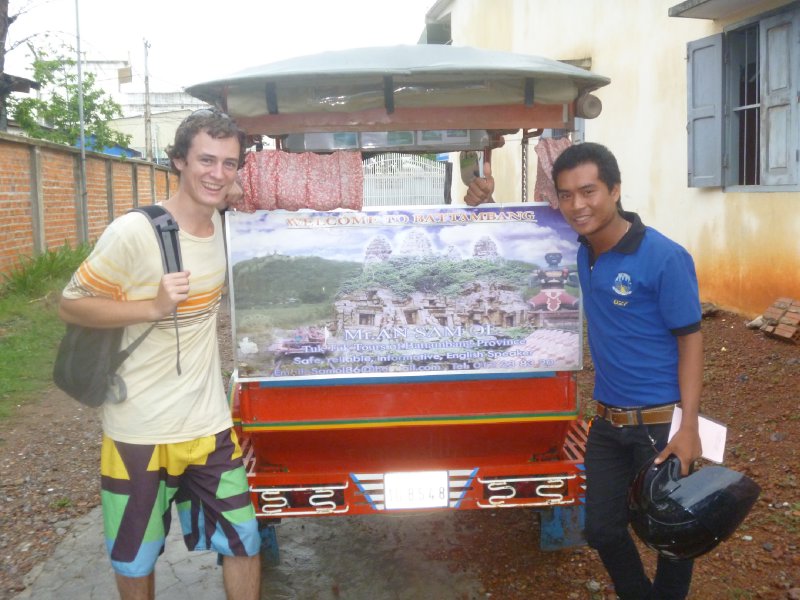 The next day we checked out the city by ourselves but it was like 37 degrees so it quickly turned into a search for an air-conditioned café. That night we missed the blood moon – full lunar eclipse – because it was too cloudy, we’ll have to wait 10 years and try again. 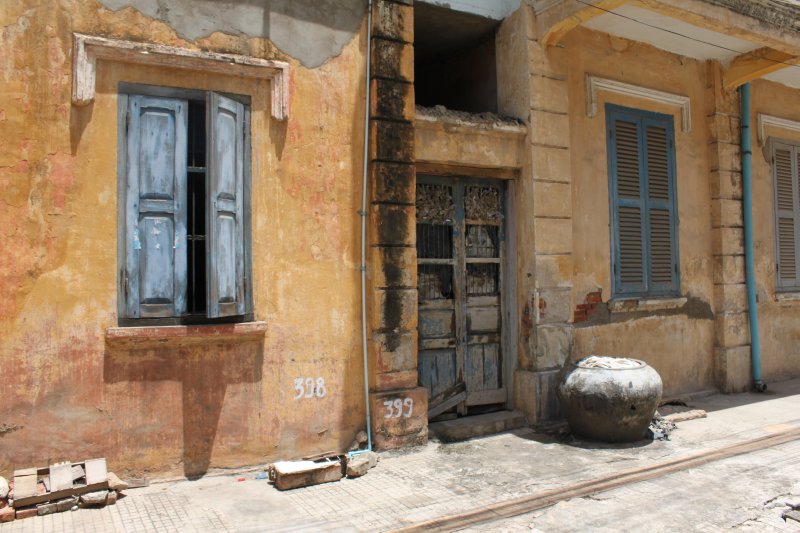 We decided to take the speed boat across the lake to Siem Reap ($18 pp). The boat sounded like it should be going a lot faster than it was; in fact the engine was the size of a small car. But I’ve been crabbing in tinny’s that went significantly faster. At one point it completely broke down and we floated around for 45 minutes while the crew jumped off and searched for new batteries. 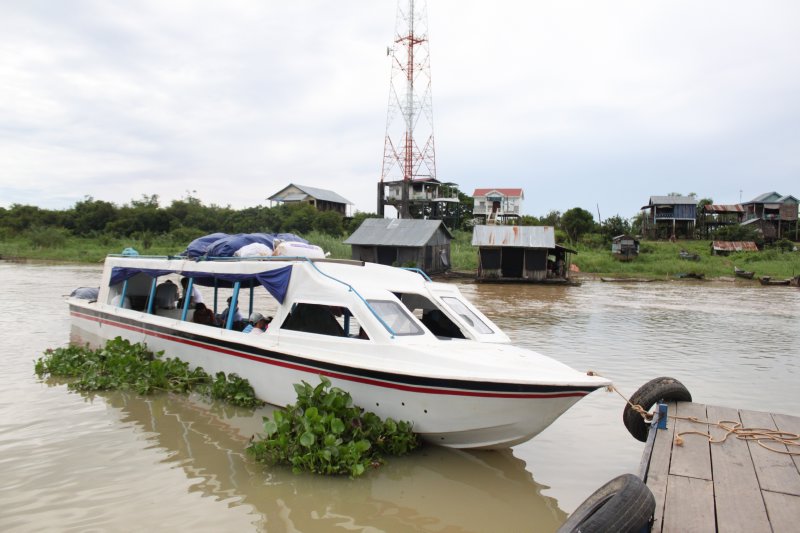 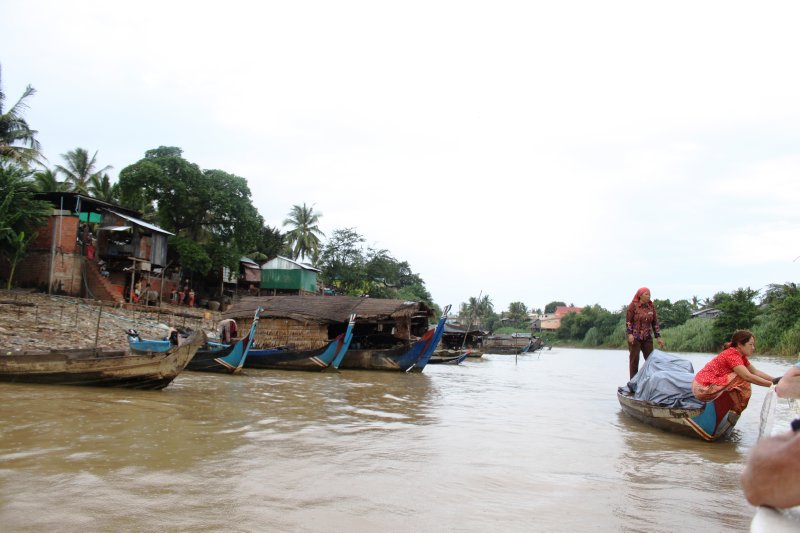 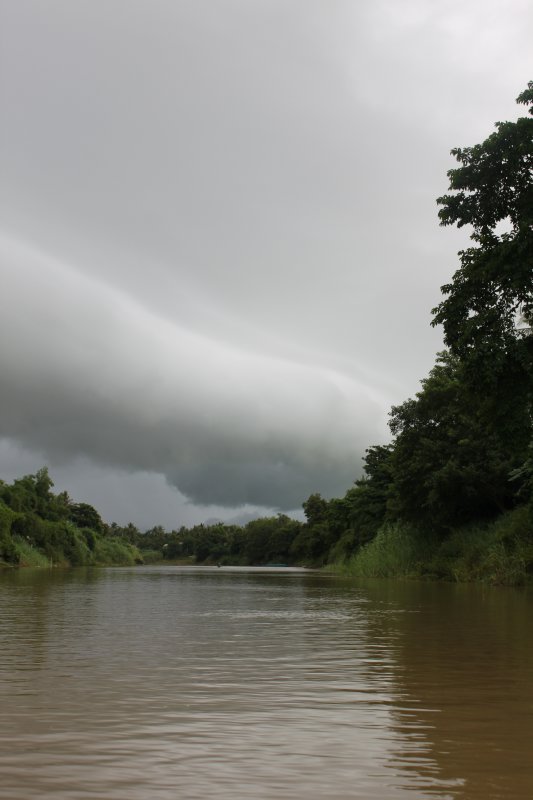 ^^ A storm was brewing 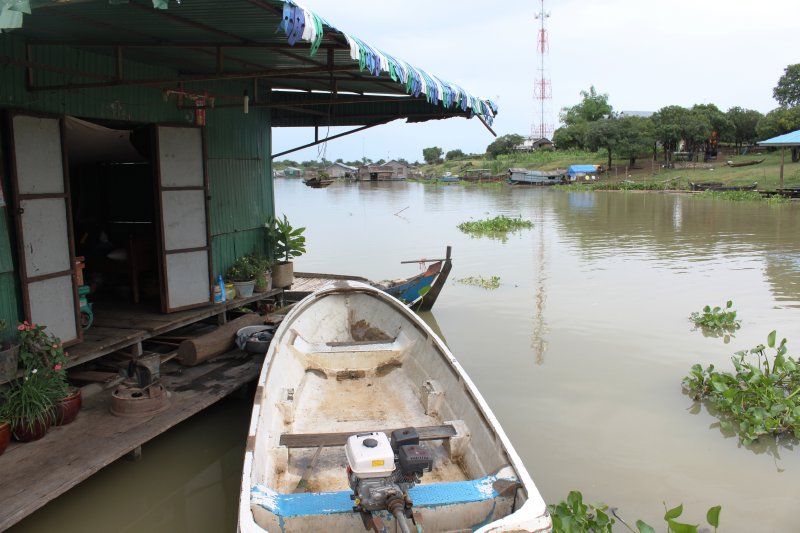 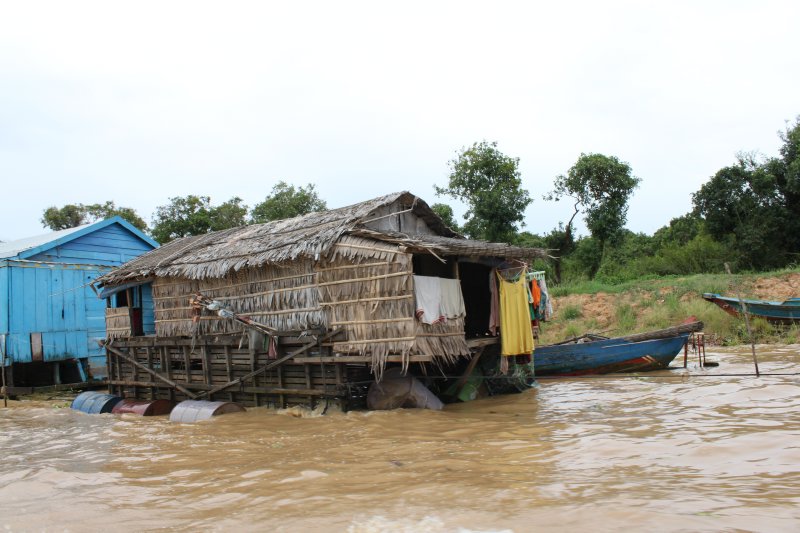 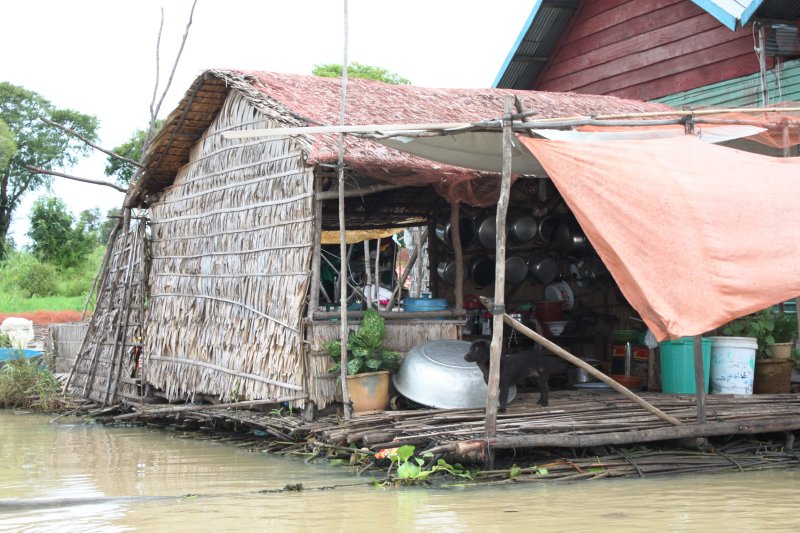 The lake was impressive; it’s the biggest lake in Asia and when you emerge out of the tributary into the main expanse it’s fresh water as far as the eye can see. We passed many floating villages on the way and the driver even stopped to buy some fresh fish and eels for dinner. We arrived in Siem Reap about 7 hours later and found a nice cheap hotel – surprisingly recommended by the tuk-tuk driver – and had drinks that night in the lively streets of one of Cambodia’s ancient capitals. 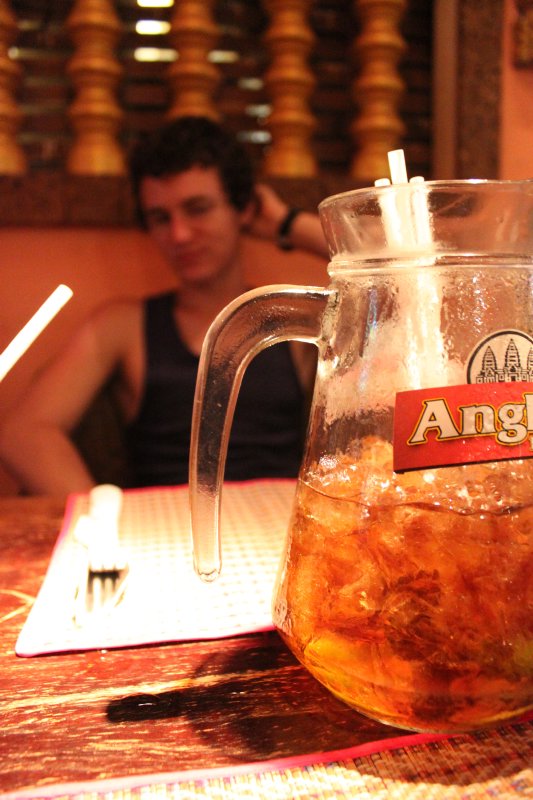 ^^ Enjoying a strong jug of whiskey in Siem Reap