After breakfast we left Jaipur behind and headed toward Agra, with a few stops in between.

Around 20km from Jaipur we arrived at Galtaji; or more commonly referred to by tourists as The Monkey Temple. It was built in the 17th century and is famous for its holy natural springs, where pilgrims will bathe away their sins. It is also home to a ginormous tribe of rhesus macaques! 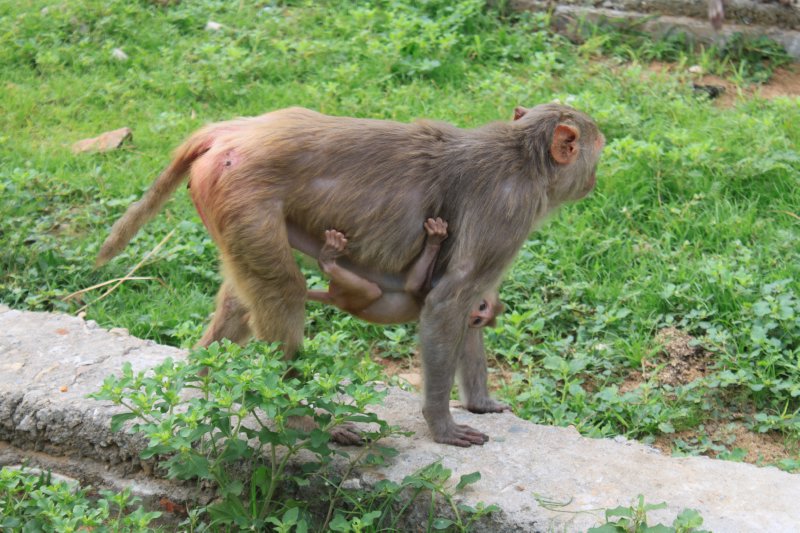 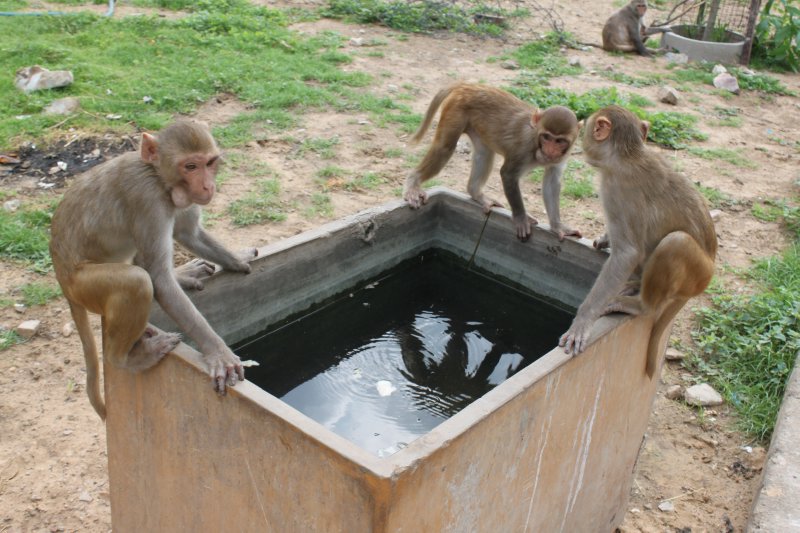 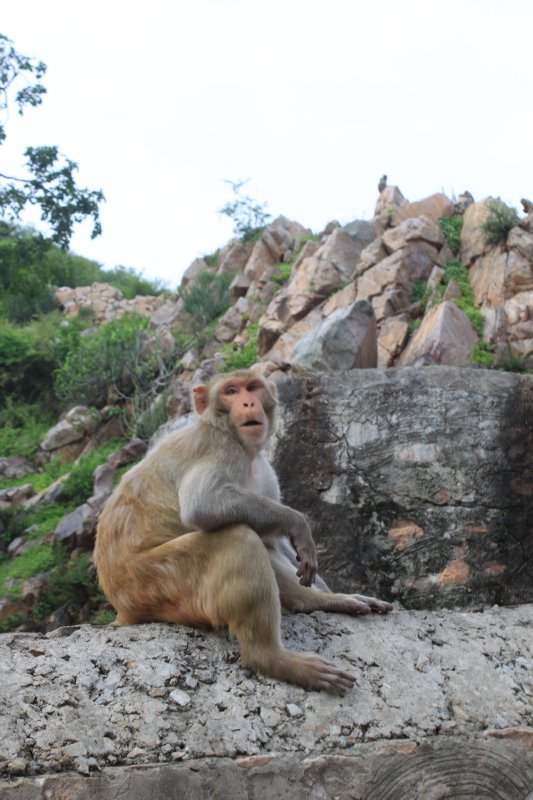 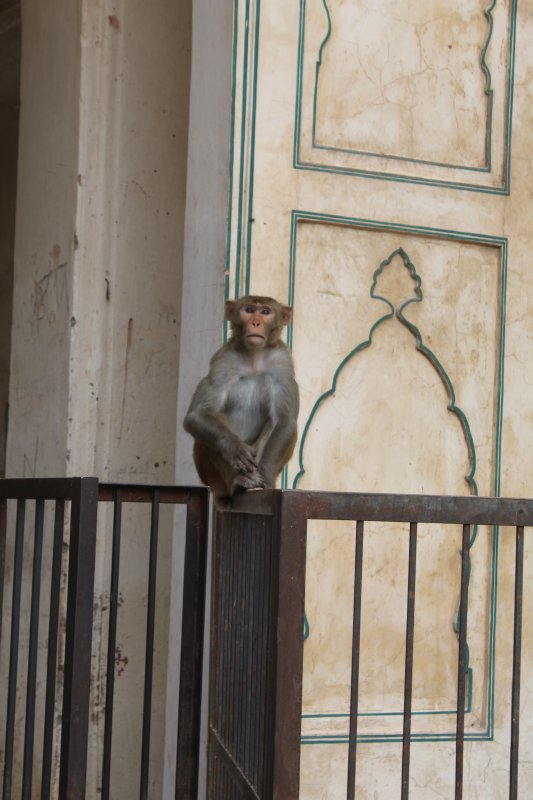 It was like a ghost town as we slowly strolled down the dirt track into the temple complex. The only visible inhabitants were the hundreds of monkeys jumping around everywhere, surprisingly a little bit unnerving – they have big teeth remember!!

When we arrived out the front of the main temple a priest quickly ushered us inside and into a small shrine room where he made us sit down in front of a looming statue of Hanuman; a Hindu deity resembling a human-monkey cross. The priest proceeded to then sing and wave burning incense all around us before tying a small piece of cotton around Kirby and my opposite wrists, which he held together while reciting another prayer. We tried to ask him what this ceremony was for but he didn’t speak any English – he did however say a few select English words and he was either trying to ask if we were married or telling us we were now married. So who knows maybe we just got hitched in India? 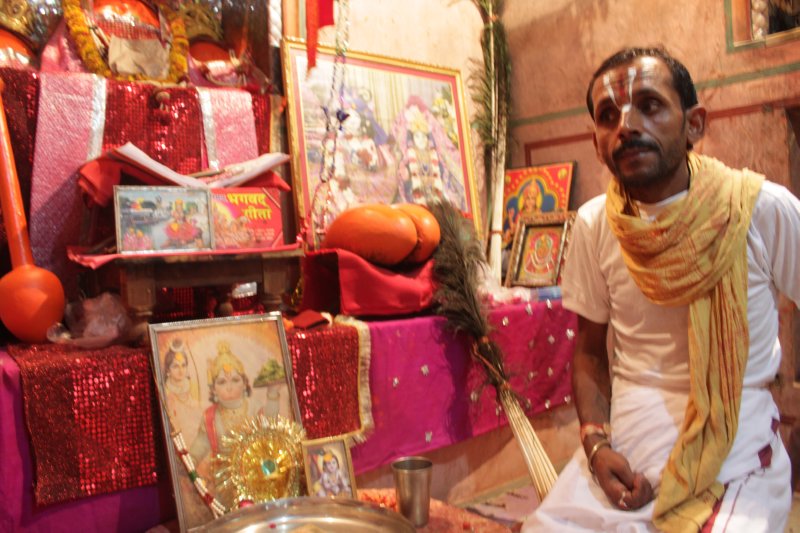 After our ceremony was complete and a donation was left we started walking further into the complex until we spotted a couple of naked men up ahead; obviously here to bathe in the holy springs. We decided at that point that we had seen enough and turned back to wake up a napping Galoo to continue our journey towards Agra. On the way back to the car we crossed paths with a few young boys who decided to practice their English vocabulary by saying “Hey, you wanna fuck?”; charming little fellas! Haha

As we continued our drive we passed through a few towns and it was obvious that the rural life in India or at least the towns surrounding the larger cities are extremely impoverished. The lack of infrastructure, running water, electricity etc. is fairly confronting – hopefully things improve in the future. 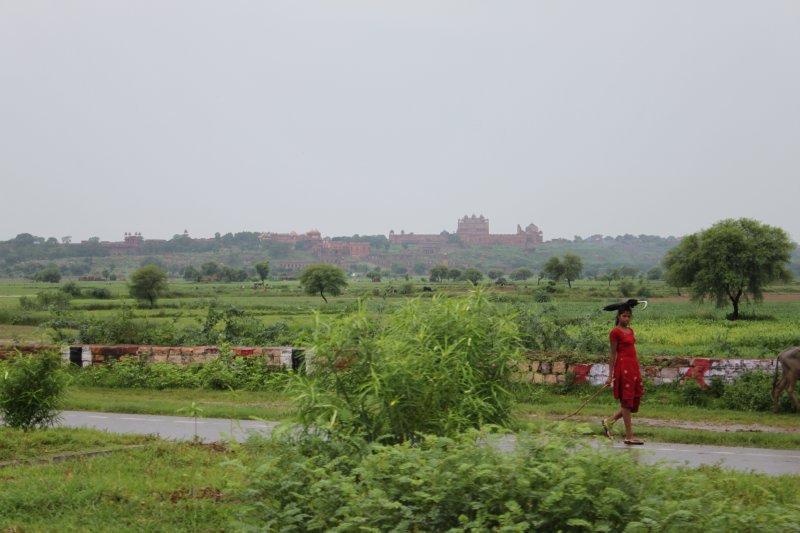 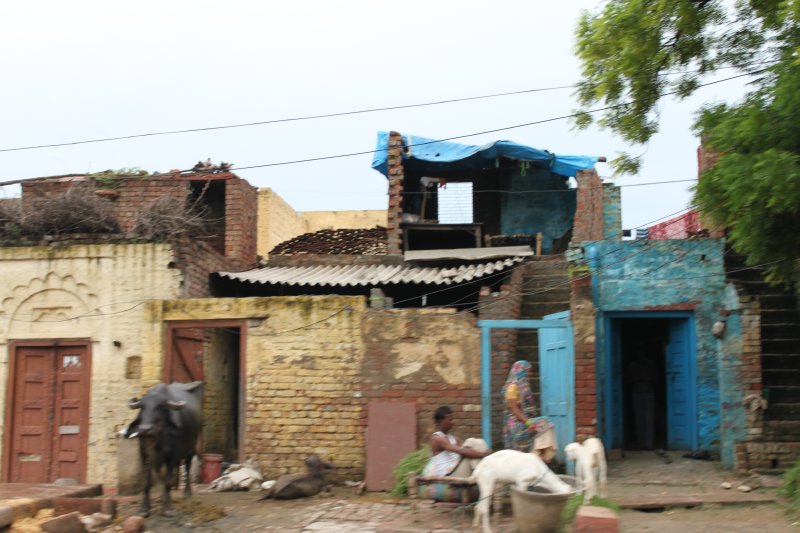 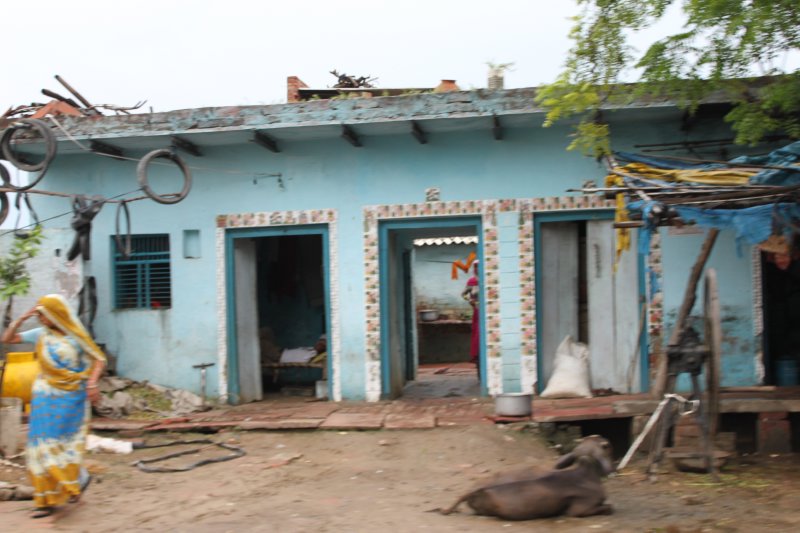 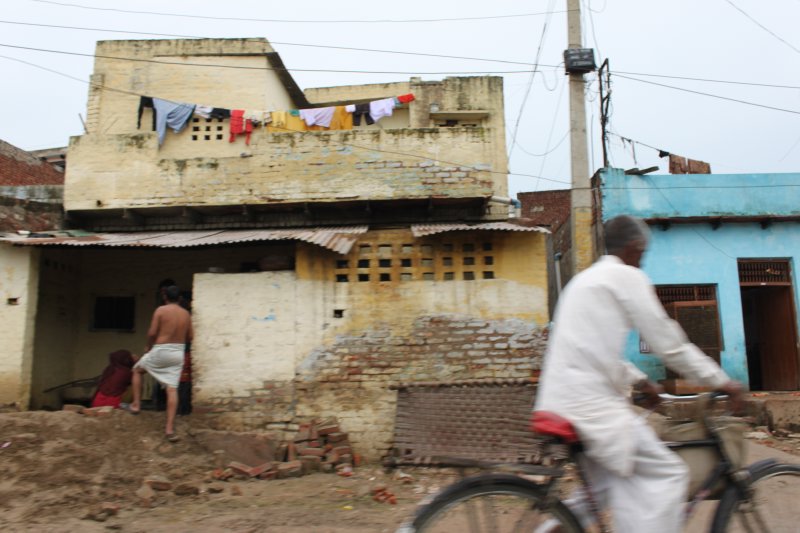 Around 100km from Jaipur we arrived in a small village called Abhaneri, what makes this little town special is the well – it is called Chand Baori and was constructed in the 9th century, it is over 20m deep, has 13 stories, and over 3500 steps, a really beautiful construction in the middle of nowhere. 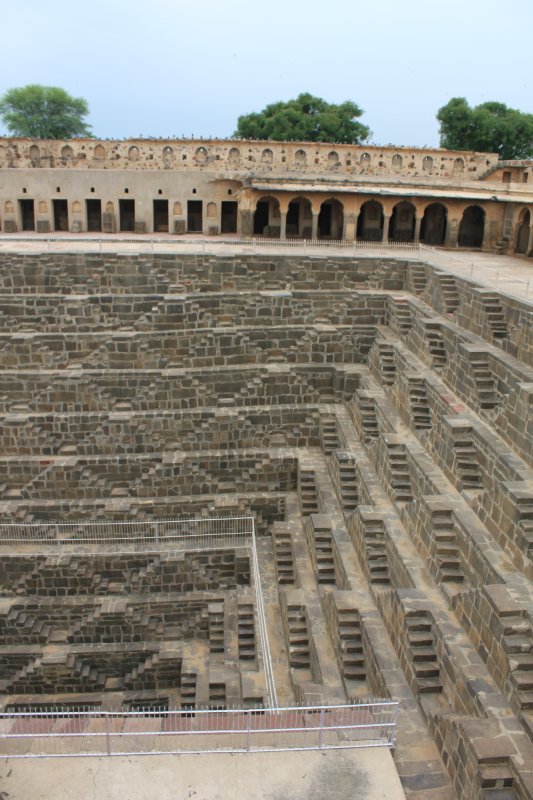 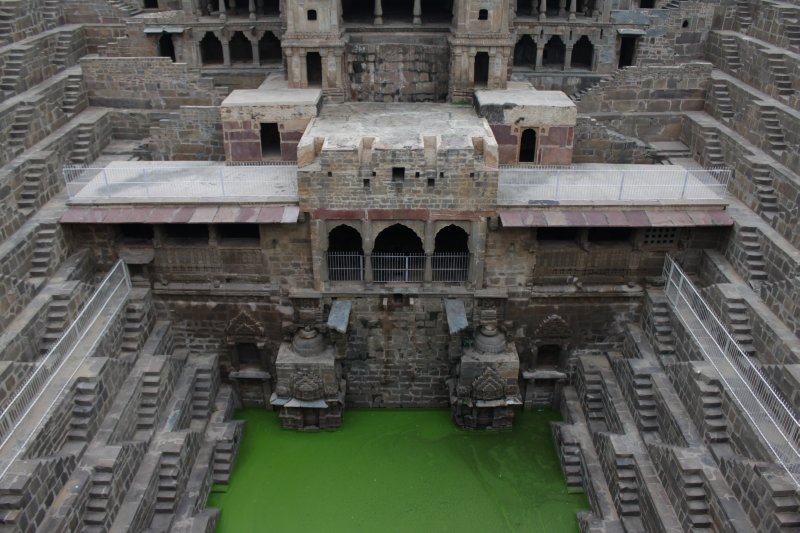 After a few hours we arrived in Agra and let Galoo have his nap before heading off to the Taj Mahal in the afternoon.

Construction of the Taj Mahal began in 1631 by Shah Jahan as a tribute to his wife Mumtaz Mahal who died that same year giving birth to their 14th child. Construction of the Taj wasn’t finished until 1653 and it wasn’t long after the completion that Shah was usurped by his son and locked in Agra Fort – where he could only gaze at his world wonder from afar.

Holy shit was it busy!!! The entrance into the grounds was like a funnel, pushing hundreds of stinky, sweaty bodies together to create a humid, somewhat comforting, somewhat revolting stench that dissipated as you exploded out the other side into the beautiful open courtyard before the Taj Mahal. Many foreigners travel to India to be ‘born again’ – entering the grounds of the Taj Mahal was in many ways a way too
literal ‘born again’ for me. 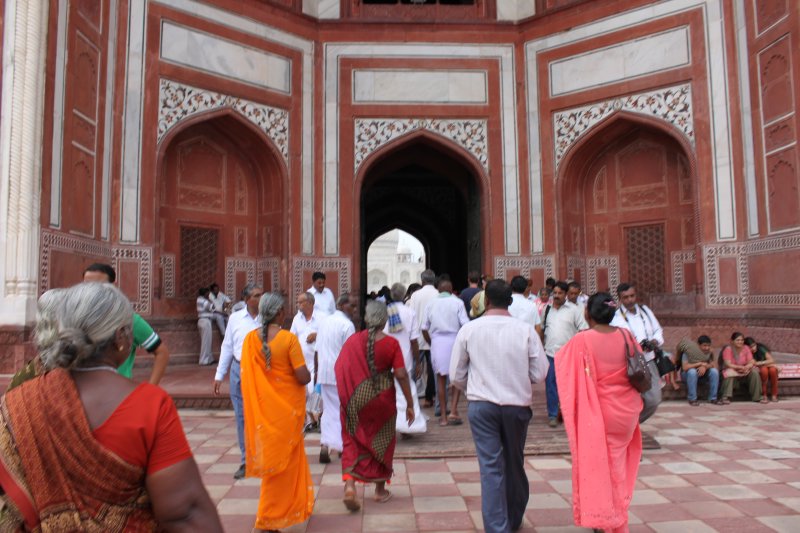 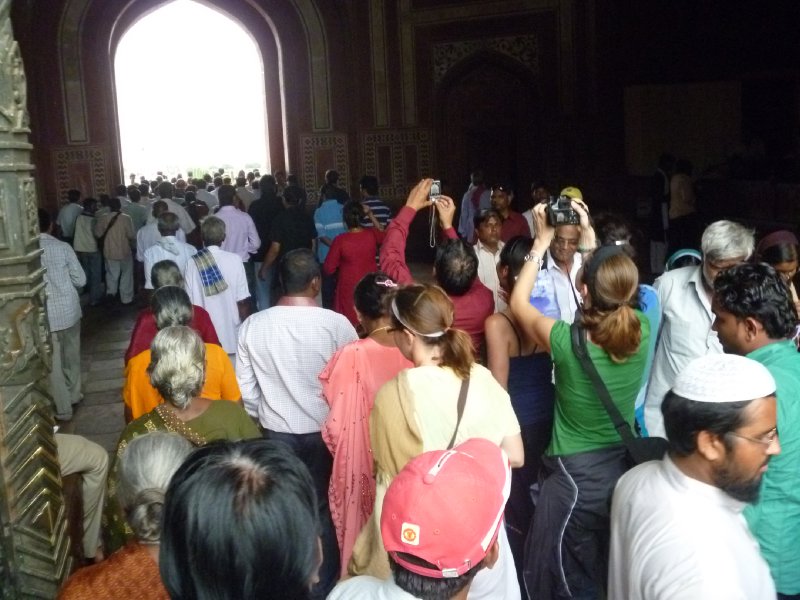 ^^ Inside the birth canal 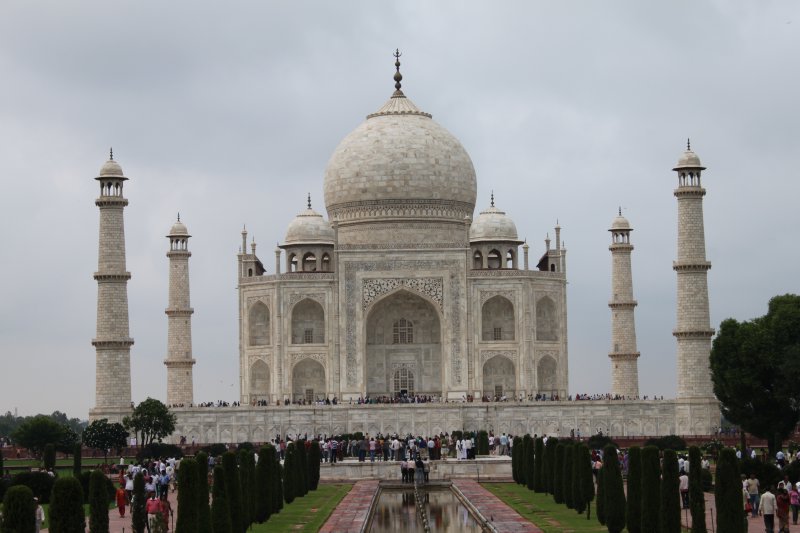 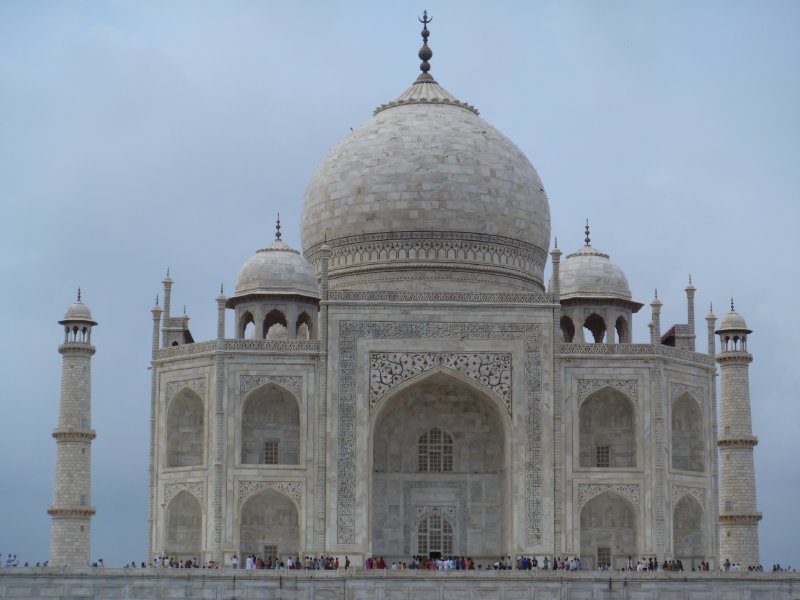 Once you disconnect your figurative placenta from the writhing crowd behind you and actually absorb the amazing sight in front of you it’s very surreal. I kept feeling like I was in a movie because it looks exactly the same in person as it does on TV – except bigger. There’s not much else I can say, the photos speak a thousand times stronger than any words I could hope to conjure. 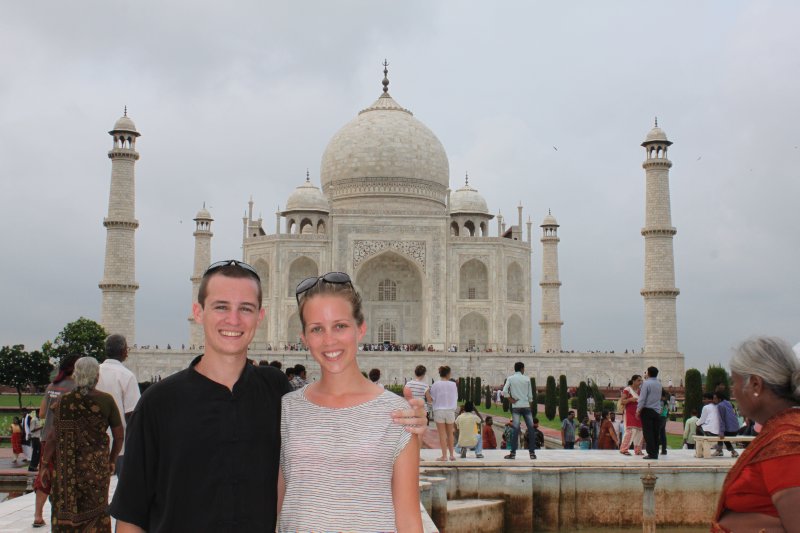 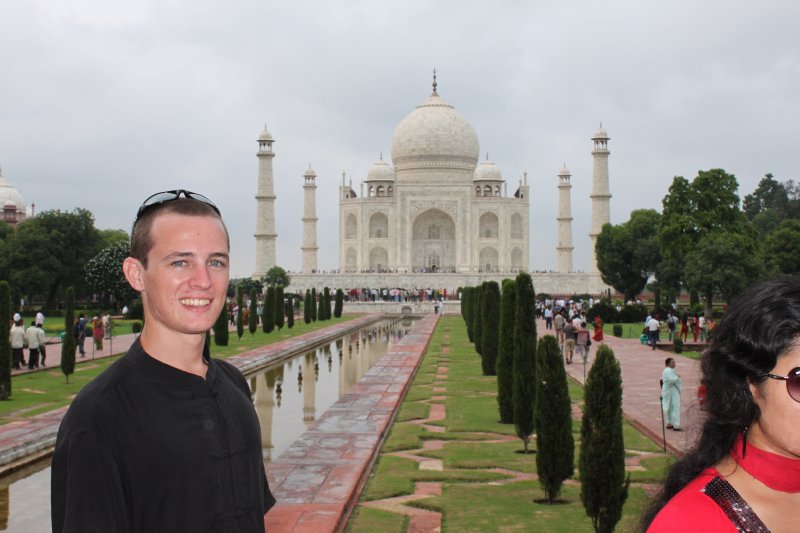 ^^ Getting in all the corny shots for mums fridge magnet haha 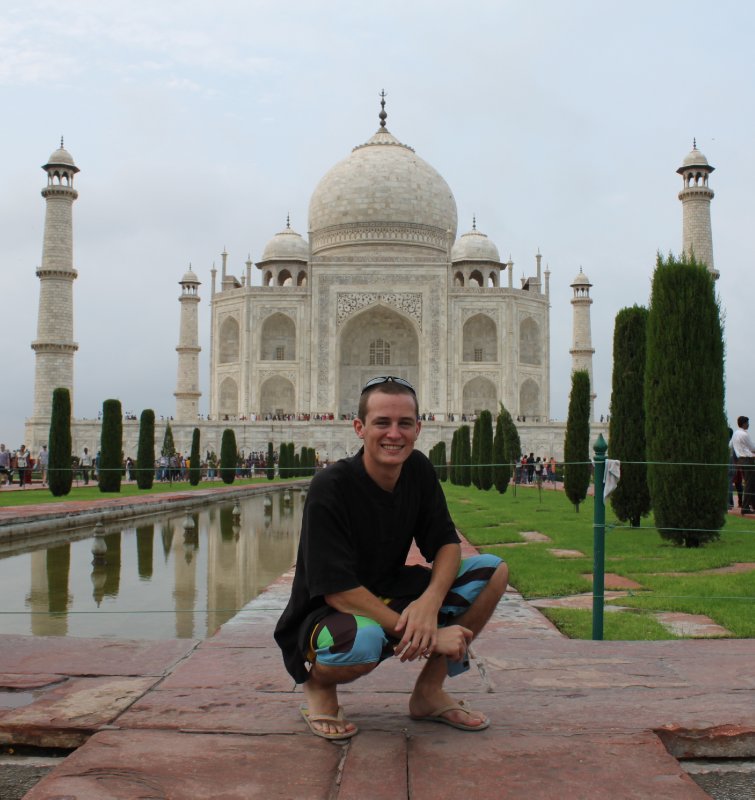 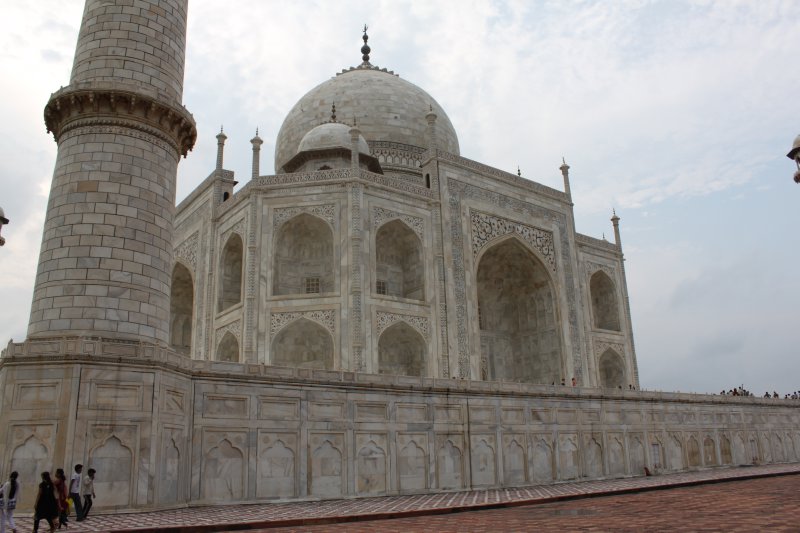 ^^ Check out how small people are compared to the Taj - HUGE 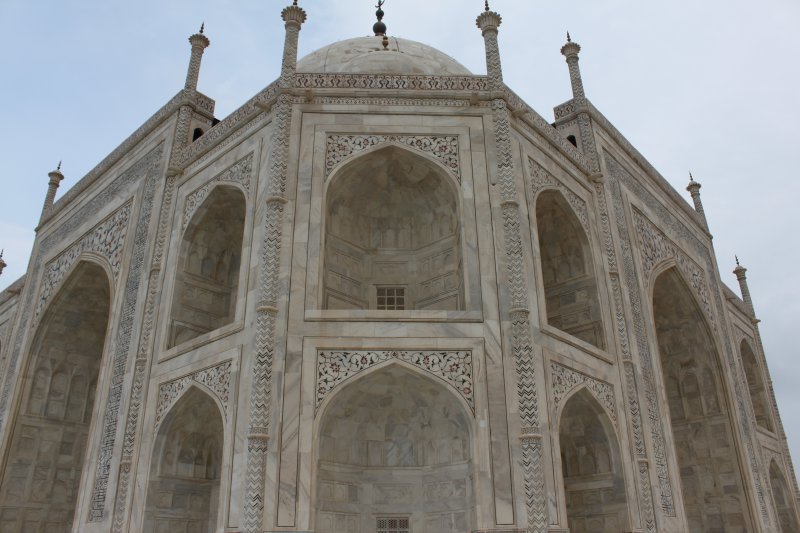 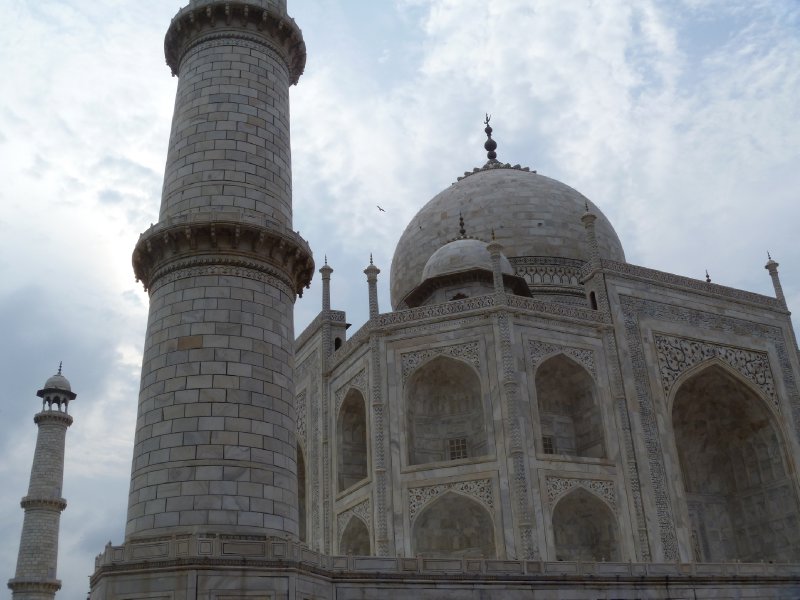 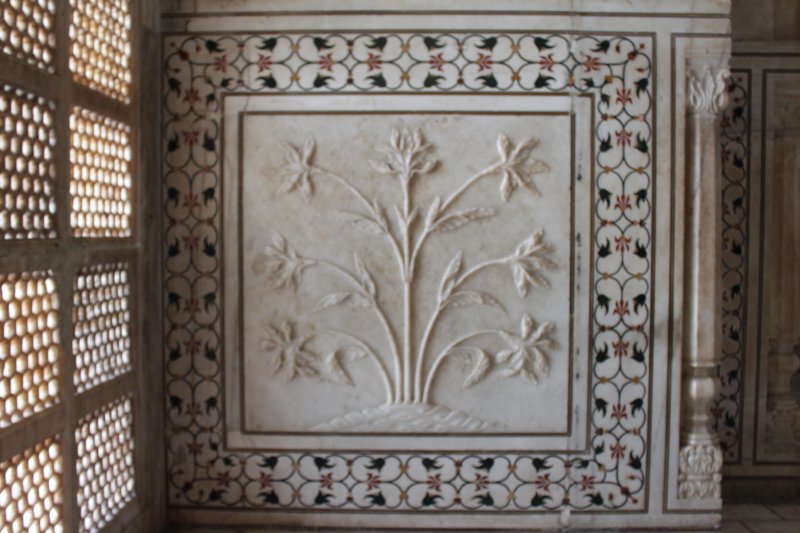 ^^ The entire Taj Mahal is decorated with painstaking detail 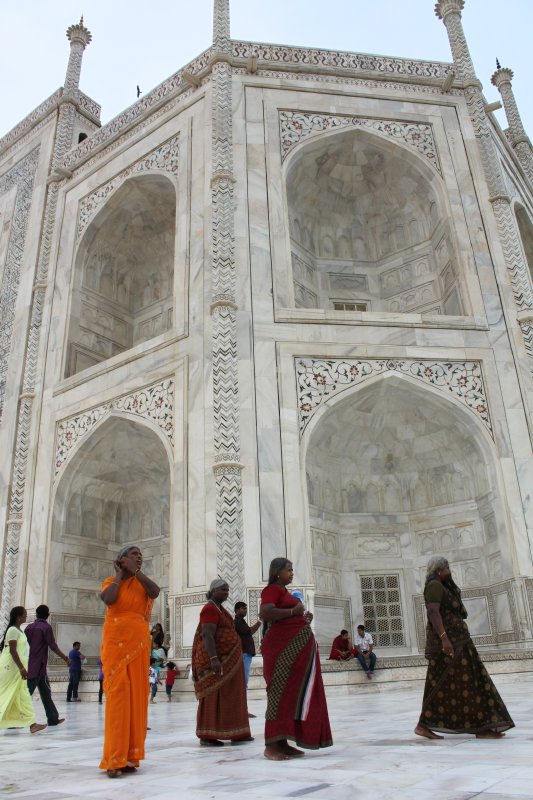 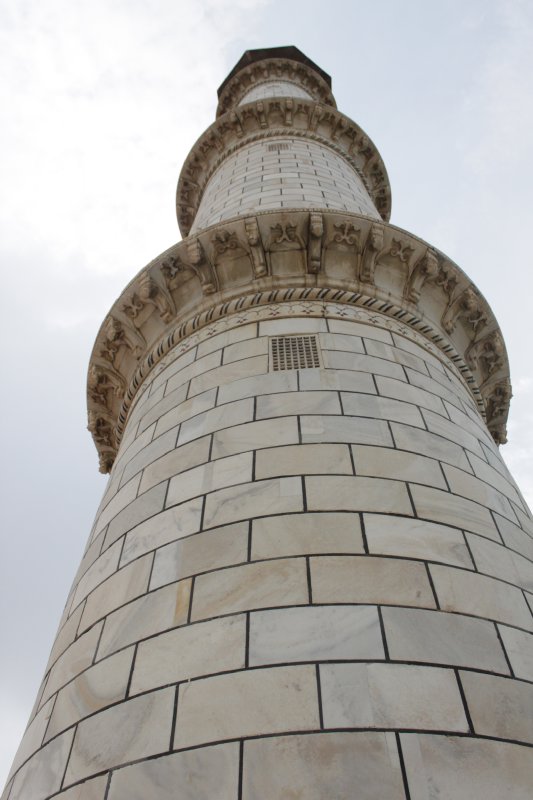 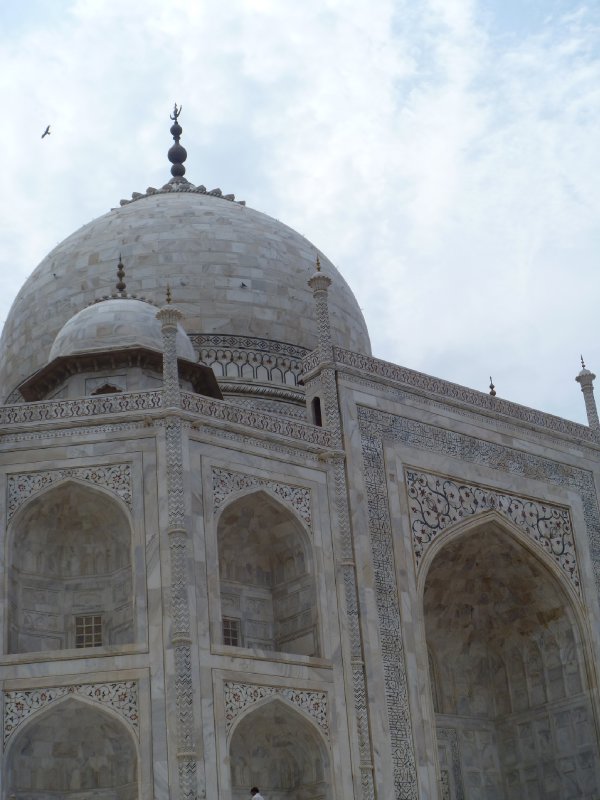 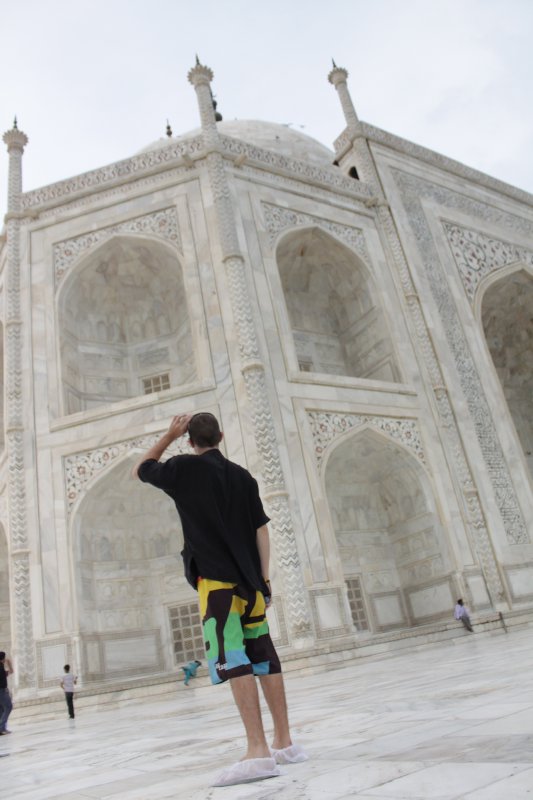 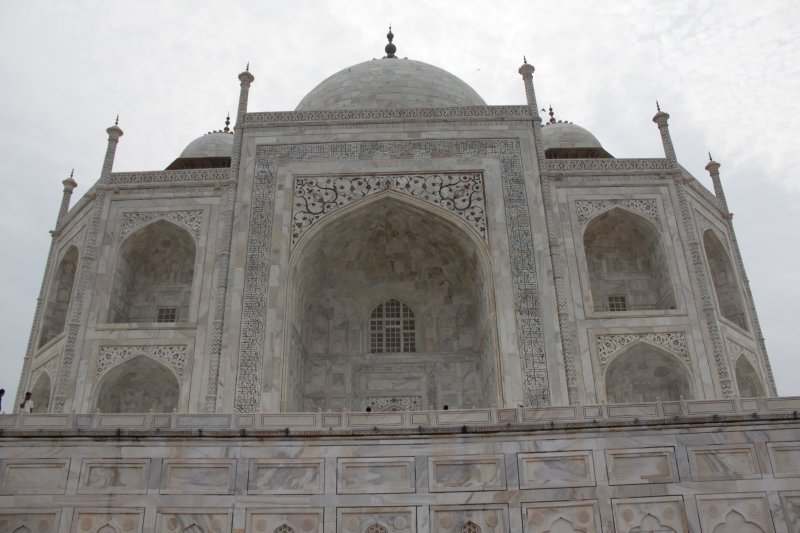 The weirdest thing for us was that we were at the Taj Mahal and people were still crowding around us to take our photo!!! I mean come on guys, you’re at one of the wonders of the world with its white marble domes looming overhead and you still want to crowd around and take our photo? So that was strange for us, and being hassled constantly sort-of takes away a bit of the magic. But oh well what can you do, Indian’s ‘love’ foreigners, there’s no doubt about that!

Tomorrow we are off to visit Agra Fort to see where poor Shah Jahan spent his last years as a prisoner of his own son.